Department of trade, industry & competition provides no evidence that price increases were temporary 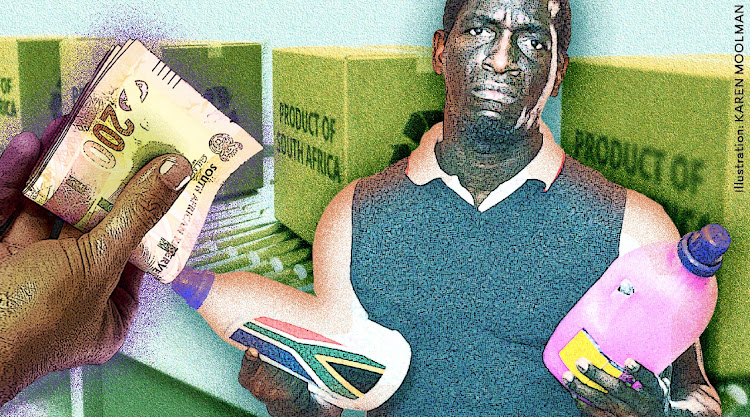 Business and Trade Unions think that SA's industrial development would be enhanced by shifting the demand from imported, to locally produced goods. However, from an affordability perspective, this might no be the case. To most consumers, local alternatives are not always cheaper or the same quality. SA's collapsing infrastructure, imposes huge costs in the supply chain and these costs are passed on to the consumer. Illustration: KAREN MOOLMAN

Business, trade unions and the government seem to be substantially in agreement on the idea that SA’s industrial development would be enhanced by shifting demand from imported goods to those made in the country.

This goal, dubbed “localisation”, sits at the centre of a range of policy documents, proposals and initiatives emerging from the department of trade, industry & competition. The argument is that South Africans exhibit an “overpropensity” to import manufactured goods, and that significant benefits will flow to local firms and their stakeholders if this is changed.

At first glance this may seem an attractive proposition, but it is not borne out by economic reality. While proponents can point to examples of successful localisation policies that have helped some firms grow (or at least not shrink), this approach is more likely to worsen our problems than solve them, because the costs of localisation are being ignored.

These flow from localisation’s own internal logic: if someone must be compelled to purchase a local product rather than an imported one it must be because the import is cheaper, better quality or better-suited to the buyer’s needs. If this were not the case the local good would have been the buyer’s first choice.

Nor is it just a matter of a higher price or lower quality of a single local product. Some items on the list of nearly 30 products now designated for local procurement are intermediate and capital goods such as pumps and pipes, which come in a near infinite variety of sizes, shapes, performance specs and engineering tolerances.

But SA companies have the capability to make only some of these. If a firm is forced to use a local product it may be necessary to redesign other elements of the larger project to accommodate the differences between this item and a better-suited import. The result? Higher costs and lower performance.

The department recognises the possibility that localisation mandates may result in higher costs, but these are seen as temporary. “While a number of localisation initiatives were not initially able to compete only on price, as scale and know-how improved the price premium declined and products became more competitive.”

The lesson from Covid-19 procurement, it says, is that “while prices were initially higher than equivalent imported products, with the benefit of clear offtake commitments over time local firms have been able to match and beat imported prices.”

Even if it is true that there are instances in which localisation mandates have resulted in price increases that turned out to be temporary, it is reasonable to ask whether this is the norm. The department provides no evidence for its claim that price increases were temporary, or that the local goods were equivalent in terms of quality to the prohibited imports.

The more pernicious effect of localisation is that it shields local firms from international competition while guaranteeing them market share.

Where is the incentive to remain efficient, and to innovate for fear of losing market share? Many firms will spend more time on lobbying the government for their products to be on the designated list of forced local procurement.

These problems are particularly acute in an economy such as ours, where industrial niches are often dominated by a small number of firms, muting competitive forces in the domestic economy.

In addition to designated products for imposed local procurement an ambitious proposal for localisation is contained in an agreement at Nedlac that over the next five years nonpetroleum imports will be reduced by 20%. This, the department argues, would raise GDP by five percentage points.

This would be true if the reduction in imports had no other malign effects. By raising costs and prices localisation leads to lower real incomes at home, resulting in less demand locally and weaker export performance. This effect is magnified when localisation policies deepen the challenges in our logistics networks, making it even harder to export competitively.

The lack of realism contained in the goal of reducing non-petroleum imports by 20% has been demonstrated by an analysis conducted by Intellidex on behalf of Business Unity SA, which showed that while there were some sectors in which achieving the requisite growth needed was conceivable, in many instances it simply was not. Sectors such as machinery and electronics, which have been in long-term decline, cannot be expected to grow at rates of more than 20% a year to achieve the required level of output growth to replace the goods now being imported.

A more profound problem with the department's insistence that SA has an “overpropensity” to import, is that it isn’t true: SA’s ratio of merchandise imports to GDP is in line with international averages, essentially the same as  Germany, South Korea and Sweden, and lower than Portugal, Mexico, Malaysia and Thailand.

In a world of complex, interlinked supply chains imports are closely linked to exports, and to exports as a share of GDP. There is a strong link between imports and exports, and if the former — which includes raw materials, capital goods and semi-processed components — is cut, the latter will inevitably be cut too. SA could not possibly export as many cars as it does if component imports were reduced substantially.

The country’s future growth will depend heavily on growing exports, particularly non-traditional exports. Localisation raises costs, lowers quality and increases delays. These burdens are borne by all consumers but are particularly onerous for exporters, which have no room to pass this on to consumers in highly competitive markets. By raising costs and reducing competition, enforced localisation is a goal that is both anti-export and anticompetition.

All of this contradicts the president’s economic approach: it will increase costs, make the economy less competitive and innovative, favour existing dominant firms, make it harder for new entrants, slow infrastructure delivery and undermine the Reserve Bank’s task of controlling inflation.

SA’s poor economic performance over the last 13 years has nothing to do with any supposed “overpropensity” to import, and everything to do with a range of self-inflicted policy and governance injuries. The claims made on localisation’s behalf are simply not credible. The broader costs of the policy, to be borne by the government, SA consumers, non-insider firms and exporters, have been ignored.

Localisation is an ill-conceived strategy that will only further constrain SA’s future development.

• Bernstein is head of the Centre for Development & Enterprise (CDE). This article is based on a new CDE report, “The Siren Song of Localisation: Why localisation policy will not lead to industrialisation”.

Stronger economic growth will elude SA if it doesn’t reform — fast — and if it fails to speed up the vaccine rollout. Simply muddling through as ...
Features
6 months ago