HENK LANGENHOVEN: Labour costs chief among the expenses that challenge the viability of gold mines

Despite the disruptions caused by the Covid-19 pandemic, the global mining industry has been experiencing something of a bull market, and most SA miners have benefited from higher commodity prices and are enjoying good returns on investment. This has flowed through as increased taxes and royalties to the SA fiscus during a time of severe need.

However, SA’s gold sector reveals something of a contrast to this generally positive trend. The gold industry certainly experienced a good period in the second and third quarters of 2020 as the dollar gold price peaked due to increased uncertainty about the impact of the Covid-19 pandemic, and the last months of Donald Trump’s presidency combined to create huge uncertainty, while the rand weakened with the shock of Covid-19’s effect on the local economy.

These are the short-term trends that reflect the volatility of commodity prices and the currency markets. More important for the gold sector are the longer-term trends, in which it is difficult to contemplate any changes in direction given the realities of the country’s mature mines and ore bodies, which have now been mined for 135 years. This is further confirmed by the fact that gold price variations between peaks of 40% to declines of 10% have had no impact on the volume of production, at least since 2007. 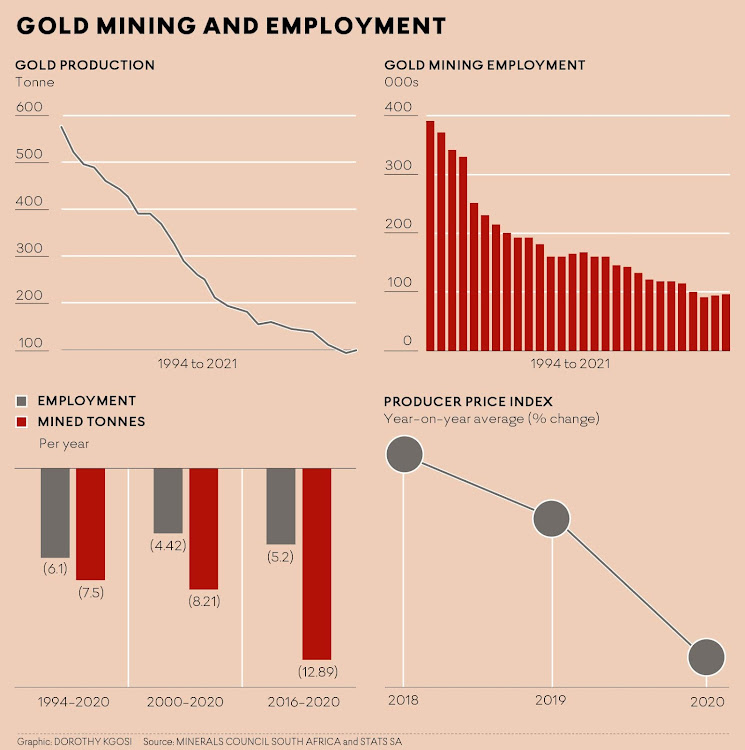 SA’s annual gold production peaked in 1970 at about 1,000 tonnes and has declined fairly persistently since then — markedly since 1994, as the graph shows. With seven months of production for 2021 known, it is estimated that between 110 tonnes and 120 tonnes of gold will be produced this year. And even this is largely dependent on the industry not experiencing further disruptions, which at this point is pertinent given the wage negotiations at Sibanye-Stillwater’s gold operations.

Employment has similarly declined, though at a markedly slower rate than production, meaning gold production per employee has declined noticeably over the years. Despite this productivity decline, wages have continued to increase significantly, with the entry-level wage rising annually at a real rate of between 2.5 and six percentage points more than the average annual change in the SA consumer price index (CPI) of 6% since 1994.

This is a consequence of efforts to preserve jobs in the shorter term and of the greater inputs needed to mine deeper mines that are yielding ever-lower grades. The productivity declines have sped up production declines, causing mines to reach marginal status, and eventually closure, quicker.

Labour costs, though representing on average 56% of operating costs, are not the only factor challenging the economic viability and sustainability of the country’s gold mines. Because of the increasing depth at which mining takes place, and the increasing electrical power needed to cool and ventilate the mines, transport gold miners to more distant working areas and pump water out of the workings from depths of more than 3km, gold mines are among the heaviest consumers of electrical power in SA.

This, combined with the exponential increase in the cost of electricity — up 560% in nominal terms since 2008  — and exacerbated by supply disruptions for more than a decade, electrical power now represents 25% of operating costs (up from 6% in 2008), more than any other part of the mining sector. The impact on long-term investment in the SA gold mining industry due to heightened uncertainty caused in part by these factors cannot be overemphasised.

All this has contributed to gold mining having experienced significantly higher overall increases in input costs than most industries. Since 2018 gold input costs have been increasing by an average of 10.1% a year, compared with 7.8% for the mining industry as a whole. And it compares even less favourably with increases in the overall producer price index (PPI) of 5.5%, 4.6% and 2.6% for 2018, 2019 and 2020, respectively.

The gold sector has been squeezed by relentlessly rising costs for years, occasionally mitigated by a strong gold price. And the gold ore must be accessed at ever greater depths while the average grades continue to fall.

This does not mean the industry and country should give in to despair. Gold mining still employs 94,000 people directly (and about double that indirectly). Those people earned R26.9bn in 2020. Sales, overwhelmingly dollar-earning exports, amounted to R86.4bn. The sector made substantial tax and royalty payments to the national coffers.

Given the continuing critical importance of gold to the economy in various respects, even if that importance has been in decline, it is critical to pay attention to the factors that can significantly speed up or slow down these trends. For the industry, the modernisation of production techniques is essential. Much attention is being paid to this. Now that private generation of power has become possible, the re-emergence of a reliable electricity supply at reasonable prices stands above all else.

For the industry, labour and investors, achieving a sensible balance between employee earnings and the lives of our gold mines is equally critical. If this can be achieved, gold mining can remain a key part of the SA economy for decades.

• Langenhoven is chief economist at the Minerals Council SA.

When the transition process is marked by turbulence, it makes for a troubled future
Opinion
2 months ago

Unions will play a vital role in modernising the mining sector

Work at the Mandela Mining Precinct is focused on people regarding safety, productivity, skills development and healthier working conditions
Opinion
2 months ago
Next Article