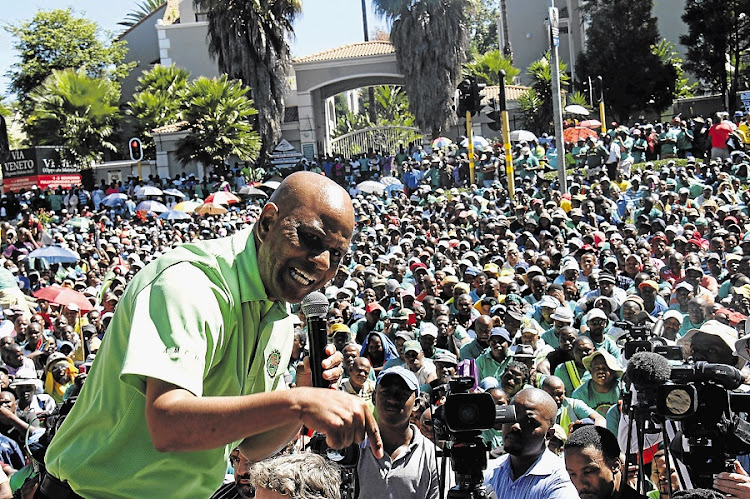 In the wake of the Marikana incident in 2012 labour relations in the mining sector have been characterised by rivalry between the National Union of Mineworkers (NUM) and the Association of Mineworkers & Construction Union (Amcu). Solidarity and Uasa, the other two recognised unions primarily focusing on skilled miners, have also been luring members between each other, which has added to the competitive trade union environment.

Amcu has become a significant player with rapid membership growth since Marikana. Given the mining sector’s unique tripartite structures (trade union, employer and government) Amcu had to get a seat in occupational health & safety forums. Thus, in 2017 Amcu became a member of the Mine Health & Safety Council and also joined Anglo American’s safety tripartite forum.

In the occupational health & safety environment trade unions and employers enter neutral ground, having a shared interest in worker safety and wellbeing. As a result, whereas Amcu did not caucus with the other three trade unions during the mining wage negotiations of 2015 and 2018, the protocol that is being followed at the Mine Health & Safety Council is that the four trade unions formally consult and speak with one voice.

Since the onset of Covid-19 this has contributed to the four mining unions being able to formulate a joint position on burning pandemic-related issues in discussions with the Minerals Council SA, which further reinforces a culture of unity.

The occupational health & safety practice of union alignment resulted in the mining trade unions forming an alliance during this year’s wage negotiations in the gold sector, consolidating wage demands and negotiating under one banner. This development is in stark contrast to the 2018 negotiations, when Amcu went on strike by itself, with the other three unions using their majority to extend wage agreements to Amcu members, the strategy on both sides also being about power play and membership growth.

To ensure that this trade union alliance functions more constructively than a political alliance roles were defined and allocated beforehand, so the NUM acts as chief negotiator, Amcu takes the chair in caucus meetings and Solidarity and Uasa focus on gathering information and providing administrative and legal support. The best strategy is decided upon by means of consensus at a caucus meeting.

The Harmony Gold salary negotiations were preceded by a safety summit at which the unions and management reached agreement on key safety issues. During the subsequent Harmony salary negotiations the spirit of co-operation and the trade unions’ collective approach paid off, with parties being accommodating towards each other and a win-win agreement concluded quickly.

The spirit in which the Harmony wage agreement was reached has led to Harmony also establishing a tripartite safety forum, as Anglo American has done. What makes this forum unique is that the National Union of Metalworkers of SA (Numsa), which also enjoys recognition at Harmony, forms part of the forum.

Numsa competes with the NUM and Amcu for members at many workplaces, and it blocked Solidarity’s application to the international worker organisation IndustriALL. Now Numsa is part of mining’s organised labour grouping and the occupational health & safety platform has the potential to bring about greater solidarity between the five unions.

Sibanye-Stillwater, which previously followed a divide-and-rule approach towards trade unions, could not negotiate constructively with the alliance as its counterpart did in recent wage negotiations, and this has given rise to a dispute process. The trade union alliance’s joint media conference during which the dispute with Sibanye was declared is also a historic first. The once warring unions made a point of sending out a message of unity, even emphasising the co-operation between traditional white and black trade unions. The Sibanye dispute is unfortunately disrupting the positive momentum towards labour peace that will benefit the entire mining sector.

The improvement in inter-union and union-employer relations that developed on the occupational health & safety platforms created the spirit for another event of historic importance when the mining unions recently concluded an agreement with the Mandela Mining Precinct, a mining-focused research institution established by the Minerals Council, Council for Scientific and Industrial Research and the department of science & innovation to focus on innovation and modernisation of mines and mine safety.

The Mandela Mining Precinct and mining unions joined hands to find solutions as partners to make the mines more sustainable. This agreement can serve as a blueprint for other economic sectors with regard to the way in which unions and players in the relevant industry can work together in the era of the fourth industrial revolution, and as such holds various benefits for employers and employees alike.

Other sectors can learn from mining about how a noncompetitive field such as occupational health & safety can pave the way for less conflict in the competitive labour relations field.

With retrenchments looming and pay increases squeezed, employers will have to find a way to keep union expectations in check
Opinion
1 year ago

Unions will play a vital role in modernising the mining sector

Work at the Mandela Mining Precinct is focused on people regarding safety, productivity, skills development and healthier working conditions
Opinion
2 months ago
Next Article