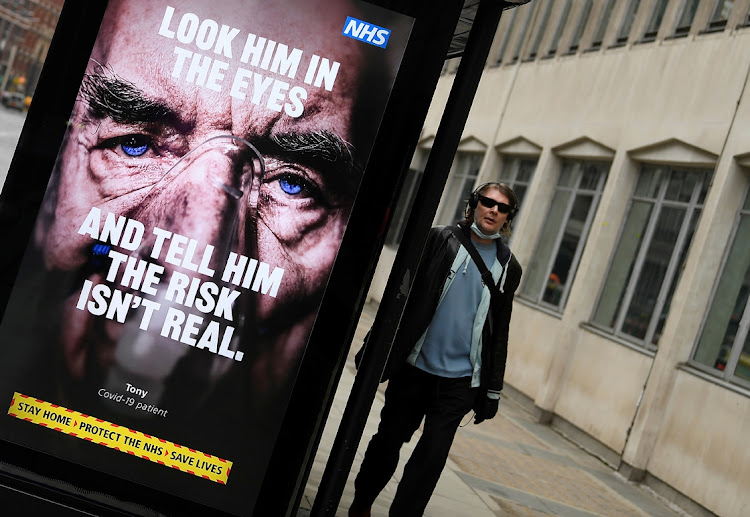 A British government public health information sign is seen on bus shelter amid the spread of COVID-19) in London on January 27 2021. REUTERS/Toby Melville

Once again Britain has one of the highest rates of Covid infection after reporting its biggest one-day Covid case increase in three months and a 16% increase in confirmed cases in the week to October 18. The government has warned of a bad winter.

Even in the era of vaccines, the risks aren’t trivial. While deaths from Covid are now mercifully low, some of those who get infected will end up hospitalised. They will suffer, and occupy beds and health service resources that are already overstretched and coping with a gargantuan backlog of cases. Families will step in; productivity will be lost. Others will end up with Long Covid, whose symptoms last for weeks or months after the virus has cleared. High levels of infection will also increase the risk of new vaccine-resistant strains of the virus.

Though some of the disparity in infection rates between Britain and other countries can be attributed to higher levels of testing (especially in schools and hospitals), testing alone doesn’t explain the gap. Rates of hospitalisation and even death are several times higher in the UK than in comparable European countries.

Part of the answer seems obvious: Britain reopened in July without guard rails in place. Prime Minister Boris Johnson encouraged the public to get off the pause button and hit “play”. The response was robust. During a recent commute on the London Underground during rush hour, I entered a packed rail car where hardly anyone wore a mask. Ditto for a trip to a full cinema. In Berlin, it’s routine to wear a medical grade N95 equivalent mask. You see them only seldom in London.

Once accused of being overly cautious, Britons now seem to lack any inhibition when it comes pandemic protection.

And yet it’s too simplistic to say that Britain’s case numbers are entirely due to the government’s approach in lifting lockdown restrictions. Other countries with lax policies (Scandinavian ones, for example) didn’t experience such a spike in cases. Scotland kept a mask mandate in many indoor settings (including schools) and still has been struggling with a higher infection rate than England. This doesn’t mean masks don’t help, but it suggests they aren’t sufficient. As in England, Scots did a lot of mixing in large groups in crowded places; Scotland saw a spike in cases when its team was still playing the Euro 2020 soccer championship and a drop when they were knocked out, while the revelry continued in England all the way to the finals.

Francois Balloux, director of the Genetics Institute at University College London, rattled off a half-dozen other inputs into the UK’s infection picture. As an early vaccinator, immunity is now waning especially for older people, he told me. (The UK also relied heavily on the AstraZeneca vaccine, which offers lower protection from the Delta variant.) Other factors such as population density or average household size can also make the UK more vulnerable than, say, Denmark. And though Britain has a high vaccination rate, more deprived areas where vaccine coverage is poor can lead to higher rates of death.

Another factor too seldom discussed is access to sick pay. There is a large disparity between low rates in the UK and more generous levels on the Continent. That has forced many Brits infected by Covid to continue working, spreading the virus to others. “Furlough was obviously needed, but so was making provisions for generous sick leave, at least temporarily; that this was not done was a big mistake,” says Balloux.

Climate may also affect how easily the virus is transmitted in Britain; other endemic viruses that contribute to the common cold are highly seasonal.

Finally, there is also the new Delta variant subtype, known as AY.4.2., which began showing up around July and now accounts for about 8% of genomically sequenced cases in the UK. Scott Gottlieb, head of the US Food and Drug Administration, tweeted about the need for “urgent research” into the subtype, which is not common in the US at present and is considered about 10% more transmissible than Delta.

While all of these factors have elevated UK infections, this virus has a way of making a mockery of league tables. Just because the UK looks considerably worse than the Continent now, doesn’t mean things won’t look very different in a couple of months. Cases are already picking up in France.

Meanwhile, several factors may combine to send case levels lower in England. First, booster shots should help those whose immunity is waning. Second, a significant portion of Covid cases right now have been found in schools and that fire can be expected to burn itself out soon, both because of the October school break and as a high number of children develop antibodies or get vaccinated. And then there’s the anomalous case of a laboratory in the Midlands that reportedly sent out false negative test results to 43,000 people from September 8 and no doubt resulted in significant additional infections. The government has suspended the laboratory, so if we assume there’s no repeat of that, that case inflation should eventually abate.

The UK still ought to provide a warning for other countries. The lifting of so many restrictions at once in July now looks unwise, at least when combined with widespread de-masking, inadequate sick pay policies and a vaccination programme that has been too slow to inoculate children and more deprived communities where the virus is likely to spread. Those government failures may mean Britons have to face a new set of restrictions soon and makes the race to boost vaccines more critical.

Johnson has decided that for now there is little public appetite for any new restrictions; those attitudes could change quickly.