On Wall Street it is said that when the winds are strong even turkeys can fly. In the global economic context what this means is that when international liquidity conditions are ample, even countries with poor economic fundamentals will have little difficulty financing themselves on the international capital market.

However, there is an opposite side to that coin. The adage also implies that when global liquidity conditions become less favourable, those economically troubled countries could get shut out of the international capital market and come crashing down to earth. The recent experience of emerging-market countries provides a vivid illustration of the validity of this adage.

When the Covid-19 pandemic hit internationally, emerging-market economies in general were devastated. Not only did these countries experience exceptionally deep economic recessions, they also found that their budget deficits ballooned and their public debt levels skyrocketed to record highs. Yet, despite the marked deterioration in these countries’ economic fundamentals, apart from a brief hiatus most of these countries had little difficulty in continuing to borrow vast amounts of money in the global capital market on highly favourable terms.

The reason emerging-market economies generally retained ready access to the international capital market despite their deteriorated economic fundamentals was that the world’s major central banks opened their monetary spigots on an unprecedented scale in response to the pandemic-induced recession. As an indication of that monetary policy largesse, last year the US Federal Reserve increased the size of its balance sheet by a staggering $4-trillion through huge purchases of US treasuries and mortgage-backed securities. At the same time, the world’s other major central banks, such as the European Central Bank and Bank of Japan, also engaged in similarly aggressive bond buying programmes. 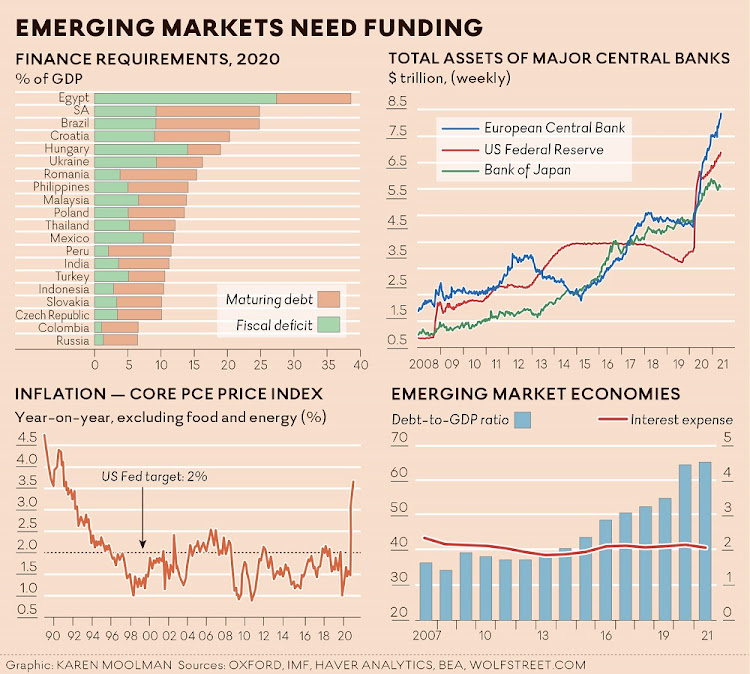 The effect of the world’s major central banks scooping up vast quantities of relatively risk-free assets was to drive down interest rates on longer-dated government bonds and to force global investors to search for yield in riskier waters. Those waters included the troubled emerging-market economies, whose bonds offered higher yields than those that could be obtained in the advanced countries.

However, the big question now confronting the emerging-market economies is what happens to these countries when the strong economic winds die down or reverse direction, as they now appear set to do.

This question would seem to be all the more pertinent considering that the Federal Reserve has been sending out signals that it could be on the cusp of a significant monetary policy tightening. US inflation is now running at more than double the Fed’s 2% inflation target. At the same time, far from abating, the supply chain problems plaguing the global economy seem to be getting worse, and international energy and food prices keep rising.

In that context, Federal Reserve chair Jerome Powell is now acknowledging that elevated US inflation could be with us for longer than he had earlier forecast, and he is preparing the markets for a November start to the Fed’s tapering off of its bond buying programme.

The question mark over the global economic outlook would seem all the more pertinent considering the serious troubles now emerging in the Chinese property sector, which accounts for almost 30% of the Chinese economy. Those problems are underlined by the impending default of Evergrande, the country’s largest property developer, on about $300bn of its debt. Further casting a dark cloud over China’s economic prospects is the increasingly anti-business stance being adopted by President Xi Jinping.

While these factors alone are unlikely to precipitate a Chinese economic crash, they are highly likely to foreshadow a substantial and protracted slowing in Chinese economic growth. That in turn could switch off one of the world economy’s major growth engines and cool international commodity prices.

If the past is a prologue, the prospective turn of the global liquidity cycle must be expected to cause a major reversal of capital flows from the emerging markets, much as it did during the 2013 “taper tantrum”, when the prospect of the Fed ending its quantitative easing programme triggered a spike in US treasury yields.

With emerging markets very much more indebted now, and having very much weaker economic fundamentals than they had in 2013, there is every reason to be concerned that the drying up of international liquidity could precipitate a wave of emerging-market defaults and currency crises.

It is against this background that both the International Monetary Fund (IMF) and World Bank have been warning that the world should be ready for an emerging-market debt crisis when interest rates in the advanced economies start rising. The multilateral lending agencies are drawing special attention to the vulnerability of those middle-income emerging-market economies with large external financing needs and elevated debt levels.

One has to hope that the Joe Biden administration in the US, and the IMF, have contingency plans to deal with a potential emerging-market debt crisis next year. Since these economies now account for about half of the world economy, their economic troubles could have major spillover effects to the rest of the global economy.

• Lachman is a senior fellow at the American Enterprise Institute. He was formerly a deputy director in the IMFs policy development & review department and chief emerging-market economic strategist at Salomon Smith Barney.

To create jobs SA needs to focus on investment- and not consumption policies such as the basic income grant, writes Isaah Mhlanga
Opinion
10 months ago
Next Article

ISAAH MHLANGA: SA is at risk of getting into an infrastructure paradox

ISAAH MHLANGA: SA is at risk of getting into an infrastructure paradox