More than 18 months into a global pandemic, African countries have been harder hit economically than other regions. Trade volumes are down, tax bases are under pressure and investment flows have taken a knock. While there are clearly green shoots evident with the recovery of global demand for commodities, much needs to be done to rebuild economies and rebuild investor confidence.

African governments themselves are unable to have much influence on the demand for commodities; this depends on the recovery in confidence in the world trading system, which has been badly affected by the myriad consequences of the pandemic. However, what governments in Africa can do is ensure their policy environments are favourable for investment.

Investors make decisions and invest funds today that will only begin to deliver returns in years to come. These inter-temporal actions require a degree of certainty to succeed. This places a responsibility on governments to formulate good policy — proposals that have been thoroughly researched, modelled, costed, stakeholder-engaged and have legal and constitutional integrity.

When policymakers rush green and white papers through without following due process, it leads not just to wasted time and expense, but also to damaged investor confidence. The more radical the proposals, and further from the current status quo, the more the potential damage. 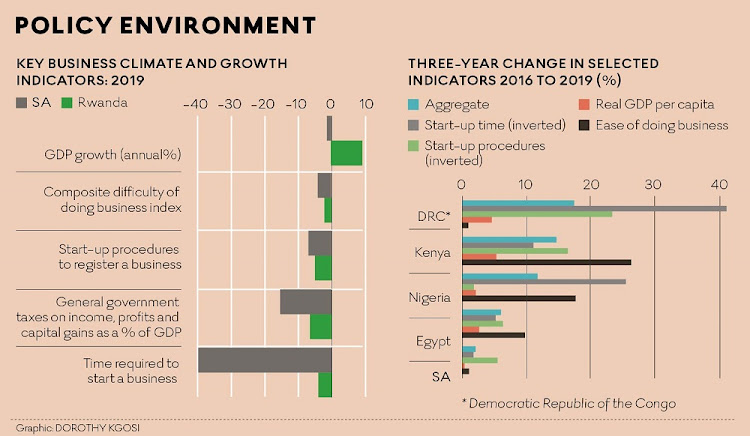 This unfortunate situation has recently played out in SA, one of Africa’s dominant economies and its most industrialised. On September 1, the social development minister withdrew a green paper on social welfare after an overwhelmingly negative reaction from the Treasury, business and labour.

Unfortunately, damage had already been done, in that badly considered policy that departed significantly from the status quo and had significant financial implications, was released to the public. This also happened without any prior behind-the-scenes consultation with the private sector.

A similar situation prevails with regards to SA’s proposed National Health Insurance (NHI) system. This policy was not accurately costed or simulated before being publicised, and independent analysts have estimated the budgeted shortfall at R112bn — more than three times the government’s estimate. Given that the state has no more room to borrow, this would have to be funded by excessive increases in taxes, in a country that is already taxed at developed-world levels. Clearly, the proposals are untenable, and among the unintended consequences, we are already seeing medical professionals leaving the country.

While a deeply emotional issue, the debate over the distribution of land in SA has led to extreme polarisation of opinions. The government’s proposals are to enact expropriation without compensation (EWC), if necessary with constitutional change. However, the undermining of property rights, hitherto a pillar of the country’s constitution, has had negative effects on investment, not just in the agricultural sector but more generally. Specifically, the banking sector could see large parts of their balance sheets wiped out if land held by their clients is expropriated.

Mining policy has been another fraught area in SA. Progressive legislation had already been introduced in the early 2000s, with provisions for empowerment and greater participation in the sector. Then in 2018, the new minerals resources & energy minister, Gwede Mantashe, introduced sweeping changes to the charter, among them a clause that excluded recognition for previous compliance with empowerment requirements. While this aspect of the charter was recently set aside by the high court, the uncertainty created by the proposals and the private sector’s opposition to it have been blamed for SA being unprepared to capitalise on the post-pandemic rally in the commodities market.

The direct consequences of such uncertainty are:

All of these consequences have been experienced by SA in the recent past as the extent of policy uncertainty has increased. Until the situation is improved, it is unlikely that SA will be able to emerge from its current state of economic stagnancy and low investment levels.

The current state of SA could be compared with that of another African country — Rwanda. Though by no means free of its own challenges, Rwanda has made remarkable progress over the past 20 years, exhibiting strong growth, urban development and expansion, extensive investment interest, technology uptake and industrial diversification. It has also had a stable policy environment, one in which investors have been able to enjoy relative policy certainty.

According to calculations made on uncertainty data from the research arm of the St Louis Federal Reserve, the cumulative level of uncertainty in SA since January 2017 has been five times that in Rwanda for the same period. However, when one examines the policy environment in broader terms, these differences are underlined.

The data in the figure shows that Rwanda eclipsed SA in every respect in 2019. Three of these indicators relate to the bureaucracy involved in operating a business and one of them refers to the extent of the resources appropriated from economic and wealth activity by the government (aggregate taxes).

The second graphic compares the three-year changes for a similar set of indicators for SA and four other leading African countries — the Democratic Republic of the Congo (DRC), Kenya, Nigeria and Egypt. It should be noted that SA had the worst growth performance over the three-year period and scored lower in business climate scores in all but two categories — the DRC scored marginally lower in ease of doing business and Nigeria in start-up procedures.

Clearly, poor economic growth performance is associated not just with bureaucratic impediments to doing business but also to the extent of resources appropriated from the private sector (taxes) and the degree of policy uncertainty. These factors interact to suppress consumption, business production, employment, investment and financial markets.

The lessons for SA are therefore clear, and do not need to be drawn from further afield than Africa. Policy uncertainty, high aggregate taxes and bureaucratic impediments to business are all bad for growth. They create a destructive cycle that serves to suppress investment and limit business and employment opportunities in a country.

SA’s leaders and policymakers need to urgently address this if the country is to recover from the ill effects of the pandemic and take advantage of rebounding commodities markets.

• Stuart, an economist and policy analyst, is a Trade Law Centre associate.

The previous deadline was end-May, but the committee has not concluded its work
National
1 year ago

Localisation not a cure for all sectors, warns Business Unity SA

Minerals Council in legal battle for review of ‘flawed charter’