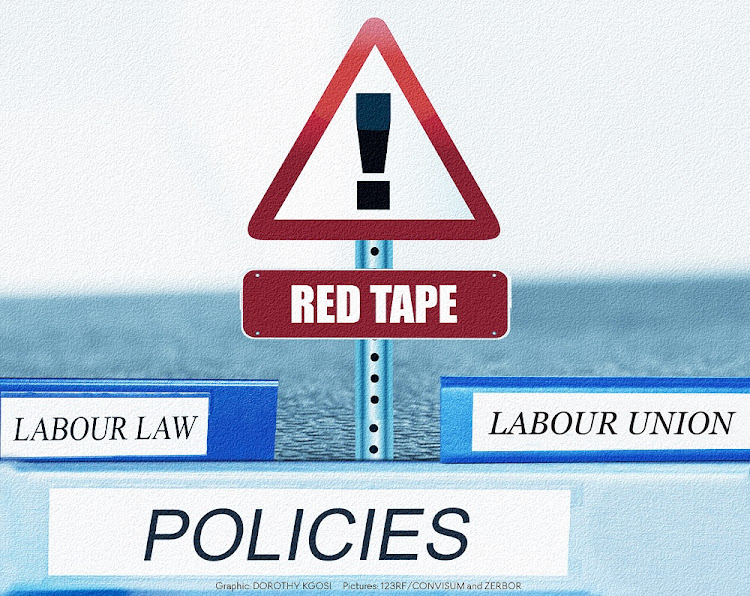 SA’s problems regarding its labour market are well known and are often the topic of debate in this newspaper.

A seemingly endless tide of legislation and regulation affecting the workplace has systematically been foisted upon employers since 1995, making it difficult to operate businesses. Small to medium-sized businesses routinely complain about the amount of odious red tape they encounter, and a healthy chunk of that relates to our labour laws.

A good shake-up of our labour market is long overdue. As employment law practitioners, we grapple with the difficulties of the statutory framework daily, hoping to find common ground to resolve disputes that are often intractable. Some urgent issues need to be addressed for us to get some traction.

Reduce the number of frivolous disputes

The Commission for Conciliation, Mediation and Arbitration (CCMA) received 221,547 referrals during its 2019/2020 reporting period, 59% of which concerned dismissal disputes. A large proportion of these are meritless, resulting in wasted time and resources for both employers and the CCMA itself. The labour court has also in recent years lamented the ubiquity of “hopeless cases” that pass through its halls, often at a snail’s pace, clogging up the dispute resolution machinery of the Labour Relations Act (LRA) at the expense of taxpayers.

There are at present no consequences for employees who pursue meritless disputes. To address this, CCMA commissioners should be required to engage in a preliminary assessment of the respective merits of a claim at conciliation stage and issue an advisory award, warning employees with dubious claims that should they progress to arbitration or adjudication they will, if unsuccessful in their claim, face the possibility of a costs order. Similar rules should apply to employers who have no prospects of proving the fairness of a dismissal. These costs orders must not be nominal in those circumstances.

The CCMA should be the gatekeeper, not an aggregator, for the LRA’s dispute resolution process. It should at the very least be taking a firmer stance towards opportunistic referrals to discourage abuse of the dispute resolution mechanisms of the LRA.

Make it easier for employers to dismiss

Employers often complain about the difficulties and expenses associated with removing disruptive or recalcitrant employees.  Almost a decade ago an amendment to the LRA was mooted that would have permitted employers to terminate the employment of employees earning more than R1m a year in exchange for the payment of three months’ remuneration. The quid pro quo for the payment of that compensation was a waiver of the right to refer an unfair dismissal dispute to the CCMA. While the idea was ultimately consigned to the rubbish bin, it may be time to revisit it.

Unfair dismissals should also be limited to those that now qualify as “automatically unfair” in terms of section 187 of the LRA. The ability to hire and fire without the threat of being dragged off to the CCMA would constitute an incentive for employers to expand their businesses, reduce their usage of labour brokers and invest further in their businesses. The mandatory payment of three months’ remuneration as a quid pro quo for the dismissal of such employees would also give employers pause before pulling the trigger, as doing so may be costly.

Another, perhaps less controversial, option is to exempt employers from the unfair dismissal provisions of the LRA for the first 12 months of an employee’s employment. This will allow employers greater flexibility and substantially reduce their risk and the cost of litigation in the CCMA.

The LRA permits unions and employers to refer disputes based on “mutual interest”. The concept of mutual interest in SA is extremely broad, encompassing everything from wage demands to an ice-cream allowance. In many instances parties are not clear where the right to manage the business ends and collective bargaining begins.

The policy choice of the drafters of the LRA was to adopt a “powerplay” model, allowing strikes and lockouts to ensue where parties could not reach agreement. Violent strikes have been allowed to flourish in this confrontational and antagonistic system and have become a powerful weapon to place economic duress on employers. This situation allows union leaders to make demands that have become parochial, uninformed by any economic data or an appreciation for or understanding of the environment in which employers are required to operate. Yet failure to capitulate to these demands often means a threat of violence, intimidation and damage to property, something employers would rather avoid.

The LRA does not require unions to comply with their own balloting requirements before embarking on a strike, and as a consequence the principles of democracy and majoritarianism, which should underpin the institution, are subverted. Union leaders are not held to account for inciting violence and breaching court orders, and sadly no provisions dealing with (or even prohibiting) strike violence are to be found in the LRA.

Strikes that turn violent should not have any special “protected” status conferred on them, and this issue needs to be remedied quickly.

A one-size-for-all approach to collective bargaining is becoming impractical, particularly in the post-Covid economy. Smaller businesses operating in the fourth industrial revolution require agility, and being roped into industry-level agreements that seek to eliminate competition is not good for any economy that punts the importance of the small business sector. The irony is that while instruments such as bargaining council agreements, the Basic Conditions of Employment Act and the National Minimum Wage Act are intended to protect those who are employed, they also create barriers for the unemployed to enter the world of work.

Ease the regulatory burden for employers

SA is ranked 84th in the ease of doing business rankings. As employers drown in red tape, skills and talent are being lost to other countries in the name of compliance. Fica, Popi, BBBEE, EE, BCEA and the National Minimum Wage Act are just some of the regulatory minefields to navigate. Those who oppose these regulations have been labelled “anti-transformation”, a jibe that is misplaced. In some instances smaller employers cannot comply, while larger employers do so at considerable cost. Mercifully, the proposed amendments to the Employment Equity Act suggest, among other things, an exemption for employers who employ fewer than 50 people, meaning they are absolved from having to comply with the affirmative action provisions of the act. This is a big step in the right direction.

Ultimately, employers are the ones who will provide jobs for our country’s people. The government’s role is to provide an environment that is conducive to the creation of employment. It has not done so and appears to be out of ideas, as reflected by the rising unemployment rate.

While it may seem counterintuitive to introduce greater flexibility for employers, doing so would assist in attracting investment, growing the economy and reducing unemployment. The government should accordingly give serious thought to its labour market policies as part of a broader economic project to unlock the potential of our economy.

• Coetzer is a partner at Cowan-Harper-Madikizela Attorneys.

THULAS NXESI: Left to themselves, employers will not bring equity

LUCKY NTIMANE: Winter of discontent marks a fork in the road for SA

LUCKY NTIMANE: Winter of discontent marks a fork in the road for SA