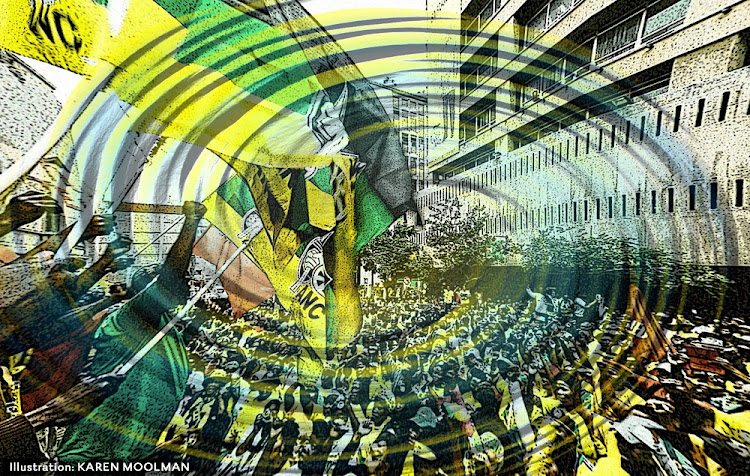 The word vortex is defined as “a whirling mass of fluid or air”, as in a whirlwind or whirlpool. When the new SA dawned in April 1994, a supreme constitution was soon adopted, with the support of the vast majority of the population. It posited a vortex with an upward trajectory, like a whirlwind, to take the country to a higher plane, not a whirlpool dragging its people down.

Here are some phrases chosen from chapters one and two of our supreme law, unsurpassable in their beauty, pellucid in their intent and pure in their plan to lift up the people of SA:

The preamble to the constitution stresses our “unity in diversity” while we “improve the quality of life of all citizens and free the potential of each person”. Among the general provisions in chapter 14 is a stern admonishment that “All constitutional obligations must be performed diligently and without delay.”

However, University of the Free State chancellor and newly elected Business Unity SA head Bonang Mohale recently complained, with justification, that we in SA now lead the world in all the wrong ways. We spend more per capita on education to produce the worst results in the world. We have greater inequality now than ever before, worsened by load-shedding, water shortages and hunger.

Our Gini coefficient moves inexorably in the direction of greater, not less, income inequality. Our joblessness, at 44% of the workforce, is greater than in any other country in the world. Our credit ratings as a country become junkier year by year. More and more people, roughly half of us by most measures, now live in poverty. If the achievement of equality, the enjoyment of freedom and the attainment of a dignified life are our political goals, we are failing as a nation to achieve them.

In the golden years of Nelson Mandela’s presidency, when the ANC proclaimed itself “ready to govern” and campaigned under the slogan “jobs, jobs, jobs”, the envisioned uplifting “rainbow nation of God” seemed possible. But all too soon Mandela retired and the Thabo Mkebi era dawned. It is today remembered mainly for its Aids denialism, which saw hundreds of thousands die unnecessarily, and the protection of Robert Mugabe’s perfidious governance in neighbouring Zimbabwe, which has left a legacy of millions of migrants seeking to escape the ruins by trekking to SA. And then there was the expensive and ill-fated arms deal, during which the ANC failed the probity and integrity tests of good governance. We remain economically crippled by the burden of them, with the government irrationally resisting litigation aimed at unravelling the mess.

The two Jacob Zuma presidential terms have been accurately described by his successor, President Cyril Ramaphosa, as “nine wasted years”. They were a downward vortex of state capture, kleptocracy and serious corruption of various kinds. Zuma's all-too-often shocked successor describes the ANC as “accused number one” in the corruption stakes, promises big on his anti-corruption ticket and short delivers on everything while “covidpreneurism” on his watch refines the “tenderpreneurism” of his predecessor.

More worrying features include the July 2021 insurrection or food riots that followed Zuma’s incarceration, and the general falling around election organisation and repair of the criminal justice administration, without which good governance and the aims of the constitution will be thwarted. The ANC is cash strapped, if not bankrupt. So is its motivating notion of a “national democratic revolution” to replace the current constitutional order in SA. That revolution will strip away all features of governance necessary for the success of the country: respect for the rule of law; a level of independence for the media that is guaranteed by the presence of an impartial judiciary adjudicating without fear, favour or prejudice to keep alive freedom of expression and let in the sanitising light of accountability; the separation of powers and checks and balances on the exercise of power; and independent chapter nine institutions to bed down constitutionalism.

All of these will disappear if the national democratic revolution is successfully driven to its hegemonic conclusion. A Zimbabwean future beckons for SA if its goals are achieved. The ideology that underpins it is in place only in countries like North Korea, Venezuela and Cuba today. It failed in the USSR and has been adapted beyond recognition in China. A comparison between East and West Germany post World War 2 trajectories, or those of the two Koreas since the mid 20th century, tells you all you need to know.

Corruption lies at the bottom of the current downward vortex and cripples the developmental state that is so fervently desired. It undermines business confidence and scares off new investment, without which jobs are not created and poverty is worsened. The downward swirl accelerated with the July riots, yet corruption precludes the powers that be from arresting the two Dudus who fomented the violence, openly inciting “responsible” looting. Too weak, too hollowed out and too compromised by saboteurs in its ranks, the anti-corruption machinery of state is not equal to the tasks facing it.

If our national downward vortex is to be reversed, urgent reform of the criminal justice administration is necessary so it is able to deal with the seriously corrupt in our midst effectively and efficiently. Accountability Now has taken the bull by the horns and suggested to parliament that a new anti-corruption body is needed to counter the corrupt with courage, conviction and compassion for the lot of whistle-blowers who give evidence against the corrupt. There is more than R1-trillion to be recovered from the state capture looting, for use in constitutionally compliant ways instead of lying hidden in the places chosen by the corrupt.

Without a specialist body to prevent, combat, investigate and prosecute the corrupt, the downward spiral will take the country to oblivion. With that body, there is still hope of the fulfilment of the promises of the constitution that was adopted with so much fanfare and so many high hopes in 1994. Parliament has been furnished with two draft bills suggested by Accountability Now. They can be found by anyone on its website. So far, despite repeated requests, no acknowledgment of receipt or any other reaction has been received from parliament. It could, with the necessary political will, still pass this badly needed new law in 2021.

• Hoffman, SC, is a director of Accountability Now.

ATHOL WILLIAMS: No amends from Bain, yet Business Leadership SA has let it slink back into its fold

Despite its outrageous role in destabilising key institutions, the company is getting a free pass
Opinion
1 month ago

With the government incapacitated by debt, corruption and the coronavirus, the private sector's role in social upliftment is more important than ever
Opinion
1 month ago