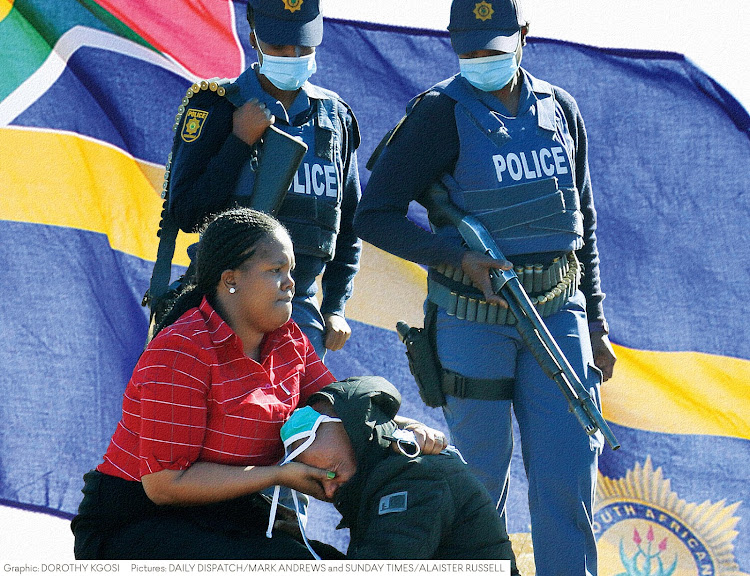 The recent commemoration of 34 SA Police Service (SAPS) members killed in the line of duty over the 2020/2021 year was a solemn reminder of the dangers of law enforcement in SA. It also raises the question of how we should view allegations of generalised brutality frequently made against the SAPS.

For many years the police have been accused of widespread excessive use of force. But a new report partly challenges this view, showing that SAPS members generally do not regard themselves as having a “licence to kill” that allows them to use lethal force even when the law does not justify it. However, it also shows that there are serious issues regarding the use of force that require attention.

The report, released in August by the African Policing Civilian Oversight Forum, was written by Ignacio Cano, a Brazilian expert on policing, and focuses on SA data from 2017/2018, when police use of lethal force accounted for 358 deaths. It compares SA with countries in Latin America that are notorious for exceptionally high levels of police violence.

Taking into account SA’s population size, rate of violent crime and the level of lethal force used against police in SA, the rate of fatalities from SAPS use of lethal force is far lower than in Brazil, El Salvador and Venezuela. Whether because of SAPS training, anxiety about Independent Police Investigative Directorate (Ipid) investigations or simply because they have no wish to kill people without justification, most police in SA adhere to legal standards for using their firearms.

The number of people killed by police in SA is in many ways linked to the level of violent crime they are dealing with. However, this does not mean the SAPS does not have a problem with using excessive force. The report highlights a notably high level of killings by the police in KwaZulu-Natal, for example, particularly in eThekwini. It also concludes that some of the situations that resulted in fatal shootings by SAPS members could have been resolved without lethal force.

There are also serious problems with torture, assault and the indiscriminate use of rubber bullets by police. According to the report six deaths were linked to alleged SAPS torture, 21 to other assaults and at least two linked to rubber bullets fired by police in 2017/2018.

And misuse of force is not merely a case of a few “bad apples”. It is an SAPS organisational problem, because little is done to combat this sort of behaviour. The SAPS does not monitor or account for the use of lethal force by its members, and is therefore unable to assess where firearms are being used at higher rates than required or expected.

Moreover, police officers are rarely held to account for how they use firearms when on duty. SAPS management avoids dealing with allegations or evidence of misuse of force by waiting for Ipid processes to be completed. Yet when Ipid recommends disciplinary action the SAPS frequently reinvestigates the case and clears its officials.

Only the most egregious cases of misuse of force find their way into the SAPS disciplinary system. In the minority of cases where members are found guilty and are dismissed this is generally for misuse of force off duty, including cases linked to domestic violence and intimate femicide.

Police departments can better ensure that their officers adhere to high standards when using force if they implement “use of force” policies aimed at ensuring priority is given to protecting human life. In other countries these policies require police, where reasonable, to use de-escalation tactics that minimise the risk that lethal force will become necessary. They also highlight the risk to bystanders when lethal force may be required. A use of force policy was developed by the Civilian Secretariat for Police but has been consistently ignored by the SAPS since it was signed by police minister Bheki Cele in 2018.

That said, the African Policing Civilian Oversight Forum report suggests that the human rights-orientated transformation measures introduced in the 1990s continue to have some effect on the SAPS. But, as indicated, it would be a gross oversimplification to say the SAPS does not have a use of force problem. Militaristic political leaders and mindsets have contributed, but the underlying obstacle is that the reform process has fossilised over the past two decades. The state has largely failed to come to terms with the complexities of steering policing and responses to crime in SA.

Pronouncements by Cele and national commissioner Khehla Sitole at a recent meeting of the portfolio committee on police reflect the depth of this problem. They sought to deflect criticism of the police handling of the July unrest, arguing that the hands of the police are tied as a result of human rights provisions. They spoke in vague terms but appeared to endorse the false claim that the law prevents police from defending themselves.

The memorial to the 34 SAPS members who were killed in the line of duty reminded us that police work is fraught with danger. But this should not discourage the government from further efforts to improve management of the use of force by police. International experience is that a focus by police on protecting life, which includes an emphasis on police safety, can be a win-win, both in reducing killings of police and unnecessary killings by police.

The police typically account for between 400 and 500 deaths per year in SA. In the context of a country beset by a wide variety of problems and that records upwards of 21,000 murders each year, one may ask whether there is any need to focus on these killings. Many members of the public may regard them with indifference, if they do not celebrate them, on the basis of the assumption that most of those killed are criminals.

But disregard of killings by police is not simply a manifestation of attitudes to killing alleged criminals. It also reflects the historically embedded neglect by SA society of the killing of young black men, who account for the vast majority of victims, not only of killings by police but of fatal violence in SA. Policing has a central role to play in establishing respect for the idea that the lives of young black men also matter.

We should remember that the approach police apply to the use of force, and the taking of human life, often comes to define how they are seen. The expectation that police should protect human life should not be seen as an impediment to their effectiveness, but as something they use to build public trust and confidence in them.

Human rights provisions do impose limitations on the police. To overcome these we need a system of policing that is capable of innovating and adapting to respond to the challenges police face. The pronouncements by Cele and Sitole raise questions whether the necessary leadership is being provided in this regard.

• Bruce is an independent researcher. This article forms part of work on policing and public violence on behalf of the Institute for Security Studies.

In July last year, 31,000 GBV cases were on hold, pending the processing of forensic evidence. By May this year, there were 82,000, according to ...
Opinion
9 months ago

By failing to resolve police inefficiencies, government ensures that women continue to live in unsafe and often deadly environments
Opinion
9 months ago

Gauteng health’s chief director of financial accounting, Babita Deokaran, was murdered after giving evidence about corruption involving PPE in the ...
National
10 months ago