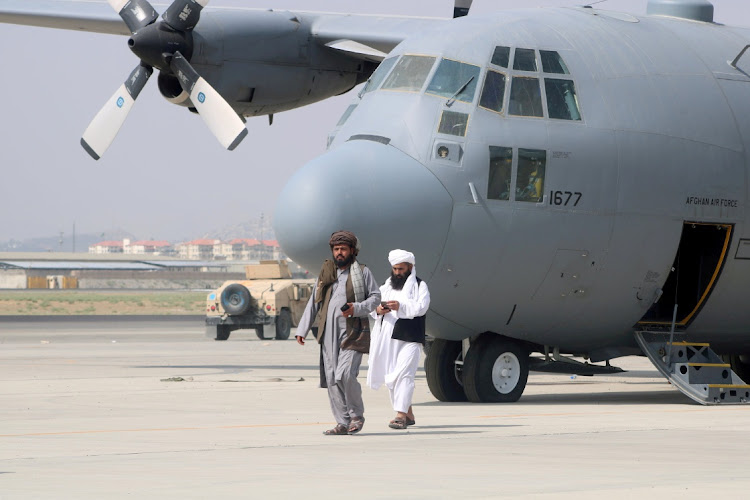 Taliban militants walk in front of a military aeroplane a day after the US troops withdrawal from Hamid Karzai International Airport in Kabul, Afghanistan, August 31 2021. Picture: REUTERS

Ears would have pricked up in Ankara on Monday when a Taliban spokesperson said Turkey and Qatar will help restart operations at Kabul airport.

While Zabihullah Mujahed did not say whether either or both those countries will assume the management of Afghanistan’s main international airport, he did not rule it out either.

For the government of President Recep Tayyip Erdogan, control of the airport is crucial to Turkey’s gaining a foothold in Taliban-led Afghanistan. Ankara offered to secure the perimeter around the airstrip even as the Biden administration accelerated the withdrawal of American troops from the country. The Taliban were less keen. In July, Mujahed warned that Turkey’s suggestion was “ill-advised, a violation of our sovereignty and territorial integrity and against our national interests”.

Turkish officials acknowledged that was a setback, and last week foreign minister Mevlut Cavusoglu said private companies, rather than troops, might provide security for the airport. It will be high on the agenda if Erdogan follows through on inviting the Taliban leadership for talks in Turkey.

Whether in military fatigues or corporate uniforms, Erdogan is anxious for Turks to play the lead role in managing the principal gateway to landlocked Afghanistan. This would be the surest way to build influence with the Taliban-led government, which would serve not only Turkey’s interests but also Erdogan’s own ambitions.

While Pakistan and Qatar compete to be the new Taliban whisperers, Turkey too would like the occasional word in the ear of Kabul’s new rulers. Ankara’s most urgent concern is the prospect of a new exodus of Afghans fleeing tyranny and political instability. While most will make for Pakistan and Iran, which have the largest numbers of Afghan refugees from previous conflicts, a sizeable proportion will head towards Turkey, many of them hoping to cross into Europe.

Turkey is already home to the world’s largest concentration of refugees — upwards of 3.7-million, according to the UN high commission on refugees. The vast majority of those are Syrians; Afghans, numbering about 130,000, are a sizeable proportion. Erdogan has already said he will not allow Turkey to be “a waiting room” for more.

Though Turkey receives billions of dollars in aid from Europe to house refugees, their presence is proving a political liability for the president. Resentment about the foreigners is growing among Turks, leading to spasms of violence in Ankara. Syrians get the worst of it but Afghans who get as far as Turkey can expect a hostile reception.

For Erdogan, whose approval ratings are slipping amid widespread economic anxiety, the political cost of a new wave of Afghan refugees may outweigh any fresh tranches of money from the EU. Far better to persuade the Taliban to ensure, whether by more benign rule or more effective border controls, that Afghans remain in their own country.

Influence in Kabul would also give Turkey valuable capital in Nato and with the Biden administration. Erdogan is in poor standing with Brussels and Washington primarily for his pro-Russian and anti-Western positions, but also for his government’s poor human rights record.

Picking up some of the responsibilities abandoned in Afghanistan by the US and Nato might soften some of the anti-Turkish sentiment. If Ankara can develop good offices in Kabul and persuade the Taliban to moderate some of their attitudes — towards women, for instance — it would spare the West some awkwardness, and earn Turkey some gratitude.

For Erdogan himself, Afghanistan presents an opportunity to extend Turkey’s sphere of influence and his own claim to being the leader of the Muslim world — both at the expense of his old bête noire, the Saudi royal family.

Can Turkey and Erdogan pull off these ambitions in Afghanistan? Much will depend on the role of their allies, the Qataris, who have cultivated close relations with Taliban leaders. Doha can open doors in Kabul, so joint management of the airport, if that is what Mujahed was implying, might not be such a bad thing. But it is too early to tell if Qatar is prepared to share with Turkey the role as Afghanistan’s connection to the wider world — assuming Pakistan does not beat them both to the punch.

Bobby Ghosh is a Bloomberg Opinion columnist. He writes on foreign affairs, with a special focus on the Middle East and Africa.

The attacker, who served in Afghanistan and Iraq, kills a mother and baby and wounds an 11-year-old girl
World
2 weeks ago