Former commander at Nato James Stavridis lists some successes, including advances in literacy and preventing another attack on the US 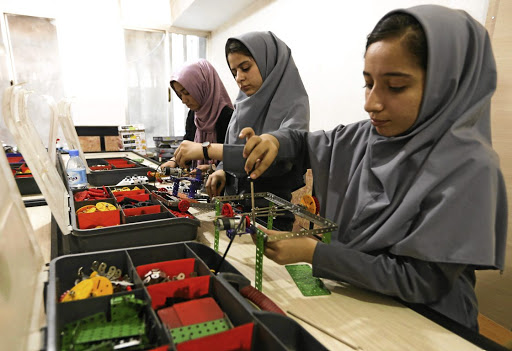 Members of the Afghan robotics team work on their robots in Herat province on July 4 2017. Picture: REUTERS/MOHAMMAD SHOIB

Amid the anger and finger-pointing at the end of the US’s flawed 20-year mission in Afghanistan, it’s easy to conclude that it was all a failure from start to finish. While I broadly agree that the effort failed overall — due to mistakes the US made in training the Afghan army as well as the Taliban’s nimble performance at the end, Afghan leadership failures and Pakistan’s support for the Taliban — certain positive outcomes are worth remembering.

Obviously, for 20 years we prevented another devastating attack on the US from the ungoverned wilderness of Afghanistan. And after a 10-year manhunt, we killed Osama bin Laden. But there were also other, more subtle successes.

The most important of these is literacy. When the US invaded Afghanistan, most of the population couldn’t read, especially girls and women, who had been denied the benefits of even primary school education. Nato struggled to train the Afghan army because the soldiers couldn’t read maintenance manuals, understand the wording on a map or communicate in writing on command and control networks. In 2009, as the supreme allied commander of Nato, I found myself often complaining in planning sessions about how illiteracy made our job difficult.

At one meeting, ambassador Richard Holbrooke, who at the time was a presidential envoy to both Afghanistan and Pakistan, lost patience with my complaining. “Hey admiral,” he said, “stop whining and teach them to read.”

So we did. The basic literacy programme we created, working with various humanitarian organisations, became foundational to the Nato training mission. Non-governmental organisations were also teaching reading, under our protection, in villages, districts and provinces around the country. Eventually, we instructed hundreds of thousands of Afghan recruits in the basics of reading, and our efforts contributed to a significant improvement in literacy in the country. It may be the most lasting thing we did to help Afghanistan.

The US military also helped advance the rights of girls and women. Several generations of female Afghans were provided education, medical care, the ability to work outside the home and other opportunities — leading to profound shifts in Afghan culture, especially in the bigger population centres.

Will these changes survive the return of the Taliban? It’s hard to say. The world has yet to see the real policy direction of “Taliban 2.0”. But I’d bet on at least an improvement over 2001. And if the Taliban leaders of today are serious about entering the international system, accessing the global financial networks and gaining diplomatic recognition from most countries, they will have to show some progress in this key area.

A third success in Afghanistan was the military’s learning to rise above the frustrations of coalition warfare and work co-operatively with other countries. At the time I led Nato operations in Afghanistan, more than 50 countries had troops on the ground, ranging in numbers from the huge US presence to a small detachment from tiny Luxembourg. Troops from Central America, Mongolia and New Zealand fought bravely and well.

The situation was far from perfect, and many countries restricted how Nato could use their forces. But most militaries were engaged in true combat operations, and their soldiers fought and died alongside ours. Some countries had more combat deaths per capita than the US had. Of the roughly 2,000 letters of condolence I signed over four years to the families of Nato troops killed in action, about 700 went to non-American servicemen and women. Special operations in particular was a multinational effort, as was intelligence gathering. The lessons we learnt in Afghanistan about coalition operations will be part of US military doctrine for decades to come.

Measured against all that the US got wrong, perhaps these achievements provide small comfort. In retrospect, it’s clear we built the wrong kind of Afghan army, underestimated the Taliban and overestimated Afghan leadership. We overshot the goal on attempting to build a new nation, failed to prevent cross-border sanctuaries for the enemies of that effort, and staged a messy and humiliating final exit. Even so, the US military has learnt some things that will prepare it to face the next foreign crisis.