The big issue for the three main contenders seeking to replace Angela Merkel is partners, not policies 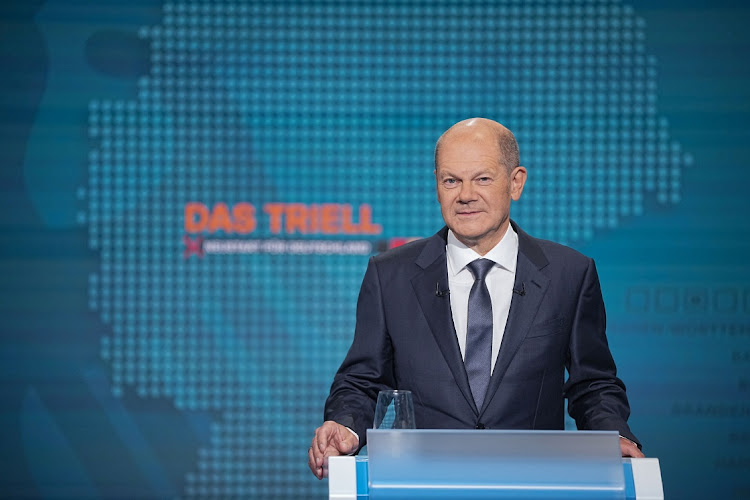 In contrast to the personality-driven American presidential system, German parliamentary democracy isn’t suited for televised duels between the candidates. And yet, in an otherwise banal campaign ahead of the federal election on September 26, what other kind of spectacle is there?

So the three candidates to succeed Angela Merkel as chancellor dutifully showed up on Sunday for the first of three duels, which the German media has amusingly dubbed “truels.”

A flash poll taken just afterwards essentially confirmed other recent surveys. Olaf Scholz, the dry and technocratic finance minister who represents the centre-left Social Democrats, came in first, with 36% of those surveyed. Annalena Baerbock of the environmentalist Greens, trying to recover from recent blunders with feisty taunts, clocked in at 30%. Armin Laschet, the feckless leader of the centre-right conservative bloc that’s been in power for all 16 Merkel years, tried his hardest to land a punch but convinced only 25%.

My overall take is that all three are (a) rather decent and inoffensive individuals who’d make pleasant enough guests at a dinner party; (b) obviously mediocre compared with the standard of chancellors such as Merkel, Helmut Kohl or Konrad Adenauer; and (c) much more similar to one another in their policy preferences than they’d care to admit.

Where does that leave us? If all you care about is who the next chancellor will be, it increasingly looks like Scholz. That’s a surprise in itself after a race that, as recently as this spring, appeared to be between Laschet and Baerbock.

But if you’re trying to divine where German policy is headed, you’re no wiser than before the debate. That’s largely because politics in this culture is a bit like organic chemistry: what matters is less the individual elements than the compounds they create. In this context, those are called coalitions.

In the arithmetically and politically conceivable combinations after September, the Greens are all but guaranteed to have a place, though probably not the one at the helm. In part, this reflects the dramatic lower-case greening of German politics. All mainstream parties now profess to be equally zealous in fighting climate change, and to be haggling merely about how best to do it.

One option would be for Laschet and his conservative bloc to lead a coalition with the Greens and the pro-business and anti-tax Free Democrats. In climate policy, such a government would emphasise market mechanisms such as a high carbon price as opposed to state bans and subsidies. It would also recommit to the transatlantic partnership, re-equip Germany’s army as allies have been urging, and otherwise keep things as stable as possible, in the EU and at home.

But the conservatives are now trailing the Social Democrats in the polls, so the more likely outcome is a coalition led by Scholz. And he has more options than Laschet does.

The one he temperamentally prefers is also to partner with the Greens and the Free Democrats. This would tilt Germany only slightly to the left, with policies such as a higher minimum wage, a fiscally more dovish stance in the EU and a more sceptical relationship with the US. But German policy wouldn’t veer dramatically.

And yet there’s another possibility, poorly understood outside Germany but now the biggest talking point in Berlin. The Social Democrats could also team up with the Greens and The Left, an extremist party that descends largely from the communists who once ruled East Germany.

Such an all-left government would amount to a small revolution. At home, it would talk the talk of modernisation but walk the walk of soaking the rich, with higher taxes and new ones, such as wealth levies that would inundate owners of family businesses and others in paperwork. Within the EU and Nato, Germany would become unreliable, because The Left doesn’t like either. In terms of foreign and defence policies, Germany could potentially go rogue.

It’s obvious that Scholz doesn’t like the sound of this. So why is the spectre alive nonetheless?

It’s because Scholz, unlike Laschet and Baerbock, isn’t formally part of his party’s leadership and cannot call all the shots. He tried to become the SPD’s boss in 2019. But after an undignified intramural free-for-all that resembled a college seminar on Marxism, he lost out to a pair of obscure leftist firebrands, Saskia Esken and Norbert Walter-Borjans, and their youthful Svengali, Kevin Kuehnert, who’s fantasised about collectivising BMW, among other things.

There’s little doubt that Esken, Borjans, Kuehnert and others on the SPD’s left wing would love to partner with The Left as passionately as Scholz dreads that outcome. And it’s a fair question which of them would ultimately hold the most sway.

Using this all-left possibility as a bogeyman is now the best remaining campaign tool Laschet has left. And yet there’s something that Scholz and Baerbock could do to neutralise it. The conservatives have explicitly ruled out even negotiating with either the far-right Alternative for Germany (AfD) or The Left. The SPD and Greens have made that commitment only vis-à-vis the AfD.

If Scholz and his SPD want to stage one of the biggest electoral upsets in postwar German history, and then to govern Germany wisely and well, they could do everybody a favour. They should simply state now that they will never partner with The Left.

Israel, Kosovo, Lebanon, Montenegro and North Macedonia have also been taken off and travellers from these states are likely to face tighter controls
World
2 months ago
Next Article