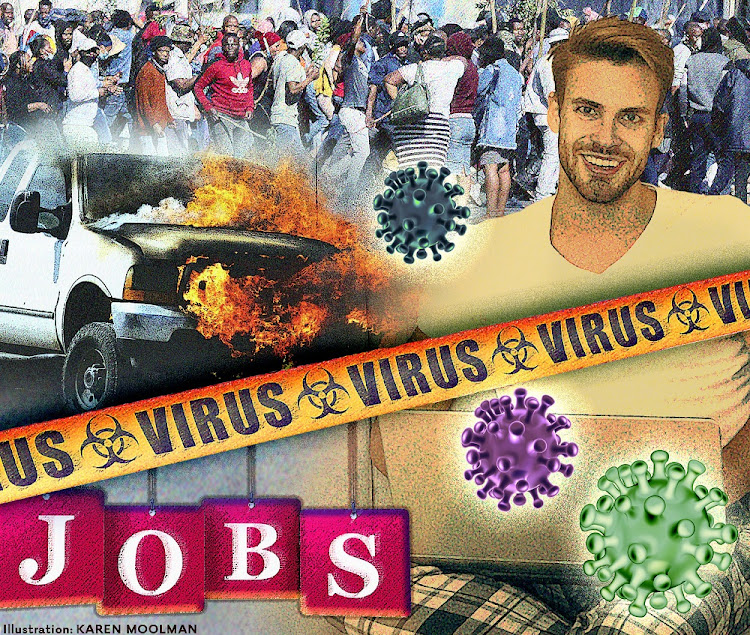 In the space of the past 18 months two mass-scale events have rocked the country — the arrival of Covid-19 on our shores and July’s looting, which caused loss of life and damage running into the billions.

Many have labelled them “black swan” events, after Nassim Taleb’s 2007 book of the same name, because on the surface nobody could have predicted they would occur, nor what effect they would have on the wellbeing of the country and economy.

In truth, that’s not what’s happened here. To qualify as a black swan, an event must meet all of Taleb’s three criteria.

First, it must be an outlier, lying outside the realm of regular expectations, because nothing in the past can convincingly point to its possibility. Second, it must carry an extreme impact. Third, in spite of its outlier status, human nature makes us concoct explanations for its occurrence after the fact, making it explainable and predictable — an “unexpected” event rationalised by hindsight.

Much to his annoyance, Taleb recently told the New York Times that his work was not meant to provide “a cliché for any bad thing that surprises us”. Indeed, Covid-19 fails the black swan test because Taleb himself — alongside Bill Gates, Laurie Garrett and others — predicted it. A paper he co-authored with Joseph Norman and Yaneer Bar-Yam in January 2020 warned how the virus would spread, simply put, because of the way the world is connected and how it relies on those connections to function.

Based on that explanation there’s an argument to be made that July’s violent looting doesn’t qualify as a black swan either — 7.8-million people were unemployed in the country in the second quarter of this year, with millions more classified as “discouraged work-seekers”.

Placed in a pressure cooker steadily heated by more than 500 days of subsequent lockdowns, millions more lost jobs. With such precarious living and economic conditions and apparent incitement by forces bent on political upheaval, it was a question of when — rather than if — the lid would blow off.

The cost of the looting and violence is still being added up. So far, more than R50bn from Gauteng and KwaZulu-Natal’s GDPs, piled atop the loss of 330 lives and with more than 150,000 more jobs threatened after 4,000 stores suffered damage and loss.

All of the actions may not have been preventable, but there’s an argument that big business could have been better prepared to avoid the subsequent disruptions, which crippled supply chains. If anything, business should have learnt its lesson from the preceding Covid-19 lockdowns. Pivoting and agility were the order of the day to ensure survival in the face of being cut off from customers and suppliers.

While more of a struggle for providers of products than services, plenty of businesses were able to take operations online nearly overnight, with work-from-home becoming a reality in as much time. For many, that agility saved entire industries, while those that turned to long-neglected business continuity plans and succession plans found that the dust brushed from their covers and pages revealed no answers in the face of disruption and death.

There’s a place for business continuity plans and succession plans in the business future, where unexpected events are inevitable — but they should be founded in understanding the causes of these events, to allow them to cover more lateral eventualities.

The company that is in touch with economic, social and governance spaces will be better placed to make decisions as the ground shifts beneath its feet. It’s more than lip service to community involvement, staff wellness and protection of livelihoods — it’s a rooting of the business in the world in which it operates, which can have few downsides.

There is an opportunity to introduce lateral thought into the process of ensuring a business’s sustainability of operations during a crisis. Having seen two upheavals take place in the space of 18 months, there’s an argument for planning to explore tangential paths to see how a business could survive the most outlandish challenges and ensure its continuity and sustainability in future. If suit, tie and boardroom can be traded for pyjamas, slippers and kitchen counter overnight, there’s hope for SA businesses to address larger challenges in their longer-term planning.

It’s far easier to take thought to the boundaries of possibility when those boundaries are reframed by reality. These plans then need to be stress tested against left-field challenges. Most business continuity plans cover how quickly a business can get back online in the event of the loss of a server centre, but what about the human element? It’s great that the business can re-establish its IT network operations in the space of an hour, but where is the direction if the chief technology officer is incapacitated by Covid-19 and the warehouse is simultaneously being emptied by violent, desperate people?

Any plan to counter risk also needs to be aligned with the strategic objectives of the organisation. The decentralisation of manufacturing is one path on the cards, along with distributing risk. If a warehouse is likely to be looted it could make sense to keep the stock levels at that warehouse lower, but the stores served by the warehouse still need to cater for customer demand. Instead of holding 45 days of stock, the warehouse declares that it will hold 15 days’ worth and the supplier needs to manage the process of ensuring the other 30 days’ worth is available at a moment’s notice.

If suppliers are unable to store stock they could reduce production and return to a “just-in-time” model. Or they could decentralise their manufacturing processes and seek to establish more plants in more locations, spreading their network, speeding up their delivery and creating jobs in new areas. There are plenty of considerations around what that does to the logistics and transport industries, so it requires a chain-wide shift in focus and approach and a middle-ground agreement that prioritises agility for all sides.

Business continuity planning isn’t about a road map to return to normality — it’s about embracing a changed world with new risks, challenges and nuances to ensure a business is sustainable and can continue to meet the new needs of its customers and staff in an environment in which it never thought it might operate.

• Walker is head of risk advisory services at BDO SA.

SIPHELE NGOBESE: Rebuilding in wake of violence must start with inclusive cities

MAMOKETE LIJANE: Five stages of grieving for the death of an idea

CLAIRE BISSEKER: Why we don’t need an economics Codesa

SIPHELE NGOBESE: Rebuilding in wake of violence must start with inclusive cities

MAMOKETE LIJANE: Five stages of grieving for the death of an idea

CLAIRE BISSEKER: Why we don’t need an economics Codesa