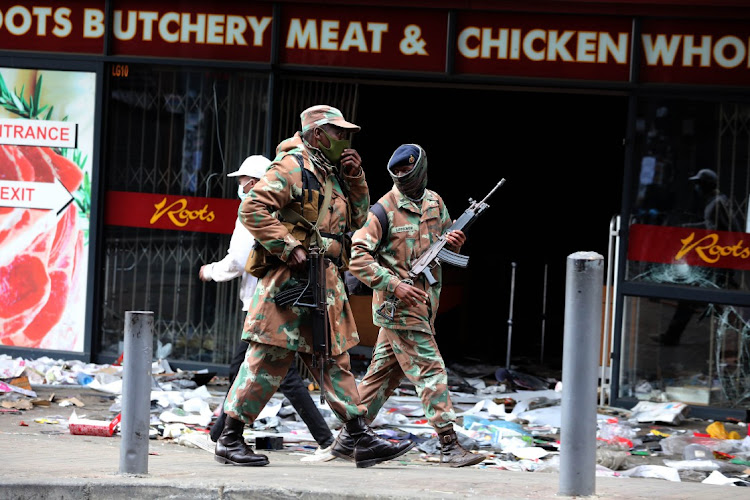 Deploying a military is a serious task, never to be taken lightly or done without good justification. This is as true for missions to augment the police for internal security or support other government departments as it is for combat missions abroad.

It’s a blunt instrument that must be used with care to avoid creating long-lasting damage both to the military itself and the organisations and communities it engages with. This isn’t because military personnel are bad or untrained, but that they’ll never be as well suited to regular civil tasks as the organisations dedicated to it, and these missions will always come second to training and preparation for combat.

Last month’s deployment of the SA National Defence Force (SANDF) to restore calm after days of intense rioting and looting was unprecedented in its size and scope in the democratic era. It was also necessary and unavoidable given the almost total collapse of the SA Police Service (SAPS) in parts of KwaZulu-Natal and Gauteng. However, the consequences of this will be with us for years to come.

First, and most important, is to understand just what a huge and unforeseen escalation this was, as it was the most SANDF personnel deployed for any reason since 1994. Because the promised number of 25,000 troops is far in excess of the number of regular infantry troops the SANDF actually has, getting anywhere close to it also required a general mobilisation of the reserves for the first time since 1994. Even that wasn’t enough troops though, so supporting personnel from noninfantry units such as tank crews, anti-aircraft and artillery gunners, signallers and engineers were pressed into the infantry role in certain areas.

It is a measure of how much government panicked, and how much it had lost faith in the police, that it literally sent out every soldier it possibly could. Pretty much all that was left was the small number of Special Forces and 43 Brigade personnel then preparing to deploy to Mozambique. The deployment was also incredibly quick for a mobilisation of this size, perhaps the fastest in proportional terms in SA military history.

No military is ever ready to send out the entirety of its ground forces in a few days or weeks, because mobilisation on that scale takes time and units are cycling through readiness levels both before and after their regularly-scheduled deployments. In fact, it is normal for even well-funded forces like those of the US and UK to have between a third and half of their ground forces at a non-combat ready level of readiness. It is simply not possible to have all units combat-ready and able to move out at any given time. This is why major military operations require months of advance warning and notice, to have time to send units through predeployment refresher training, build up stores, and issue gear.

That obviously didn’t happen in this case, as inexcusable intelligence failures and poor leadership meant the SANDF was not placed on standby ahead of time, and the collapse of the SAPS meant troops had to be mobilised and sent out without delay. Inevitably, things went wrong and the logistics system, which was funded, staffed and structured for much smaller rapid deployments up to brigade size, buckled under the strain and initially left a handful of units without ration packs and other supplies. There also wasn’t time to properly staff up the provincial Joint Tactical HQs for the influx of units, so ad hoc command structures were created instead, which brought their own issues. That things went as smoothly as they did in the end is the result of hard work from a lot of logistics and unit personnel, who pulled the proverbial rabbit out of a hat.

This won’t be cost-free though. Aside from the mammoth cost of this deployment, which was only partially reimbursed by National Treasury and will therefore cut further into the already severely constrained SANDF budget, it has seriously disrupted the training schedules and rotations of so much of the SANDF. Readiness levels will be negatively affected as a result for months if not years to come.

Moreover, we have not even begun to dig into the impact this deployment may have on civil-military relations and the public’s trust in the police and military as institutions. Using the SANDF for internal operations is hugely risky, both because it dangerously blurs the line between the armed forces and civilian authorities and diminishes the SANDF’s own core capabilities while reducing the incentive for the police to be reformed and improved.

Of course, no discussion of this deployment can avoid the elephant in the room — the persistent myth, promoted by some senior politicians and even large media outlets, that 76,000 SANDF soldiers were deployed in 2020 for the country’s Covid-19 response, and that a similar number should have been deployed now. It’s completely false: at the peak of the deployment no more than 8,200 soldiers, medics and engineers were deployed outside their bases. Last month’s deployment dwarfed that in size.

The reason for the confusion lies in the difference between the terms employment and deployment in SA’s legislation relating to authorisations for using the military. In this context employment refers to the temporary reassignment of an SANDF uniformed member away from their day-to-day job for a specific operational task or mission, whether or not that person actually leaves their home base. Deployment, on the other hand, is the actual movement of SANDF personnel out of their bases and onto the streets, other countries or similar.

Usually the difference between the authorised employment number and how many are actually deployed is small, in the order of 10%-15%, so journalists and analysts have become accustomed to treating both as the same. But that caused confusion when President Cyril Ramaphosa authorised the employment of all 63,000 uniformed SANDF personnel, along with another 10,000-13,000 reserves and auxiliaries, in support of government's response to Covid-19. What this actually meant is that it authorised the SANDF’s commanders to take any uniformed member of the force away from their regular tasks and dedicate them to Covid-19-related tasks, whether that represented deployments in co-operation with the police, medical support to provincial departments of health, engineers helping municipalities, aircrew flying transport missions, and so on all the way down to helping make cloth face masks. It also provided the authority to halt certain activities and send personnel home if necessary to reduce the virus’s spread.

In practice though, only a small fraction of the SANDF’s people ended up being used for any Covid-19 related actions. There were the aforementioned 8,200 soldiers, medics and engineers that deployed around the country, Air force aircraft that provided transport services, and a few others. Most carried on doing their regular tasks as best as possible, keeping the lights on and maintaining the force. Few reserves and auxiliaries were called up.

After all, the SANDF does not have 76,000 troops to deploy. In total, the active SANDF has just 63,000 uniformed personnel and another 10,000 civilian employees. But those 63,000 are not all infantry soldiers that you could use alongside the police — the number includes sailors, pilots, ground crew, technicians, mechanics, doctors and other medics, clerks, divers and dozens of other roles and musterings that aren’t suited for that sort of policing and patrolling work.

There are in reality only about 12,000 personnel inside the SANDF’s 14 infantry battalions, with another 1,500 or so in the Navy’s Maritime Reaction Squadron, the Air Force’s 500 Squadron, and the Special Forces regiments inside Joint Operations. That really isn’t that many, and is an order of magnitude smaller than the number of police officers deployed around the country. We need to keep that in mind each time there’s a call for the military to augment, or worse replace, the police for internal security tasks.

LETTER: US militarism poisons the world

LETTER: US militarism poisons the world