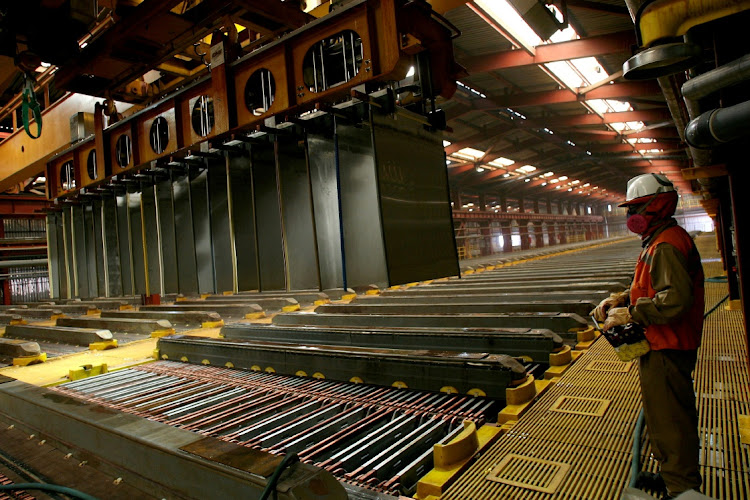 A worker from BHP's Escondida copper mine is pictured inside a copper cathodes plant in Antofagasta, Chile, in this March 31 2008 file photo. Picture: REUTERS/IVAN ALVARADO

Launceston — The market hasn’t exactly cheered BHP Group’s proposed exit from its oil and gas business, with shares of both the mining giant and the acquirer, Woodside Petroleum, tumbling in the wake of the deal.

A point of concern for investors is that BHP may have sold the assets too cheaply and that getting only Woodside shares as payment is less than desirable.

While there is likely some element of truth in this, investors may be missing the wider point of the deal, which will create a $29bn oil and gas company after all.

It’s possible this deal signals that the era of paying premiums to acquire oil and gas assets is over. From now on, companies seeking to offload these type of assets will be forced to accept ever-diminishing prices.

BHP’s Sydney-listed shares dropped 8.4% in the two days after the deal was announced on Tuesday to close at A$47.70 on Wednesday. Woodside slid 4.2% in the same time period to end at A$20.29.

The pullback continued in early trade on Thursday, with BHP down as much as 6.2%, and Woodside dropping as much as 2.6%.

To be sure, there were other reasons for BHP’s stock to retreat. For one, there’s the ongoing slump in the spot price of iron ore, the commodity that generates the most revenue for the world’s biggest mining company. It’s also possible that some investors may have sought to take profits after BHP on Tuesday reported its strongest earnings since 2012.

But if some BHP stockholders are feeling hard done by, perhaps they should reflect on another asset the Melbourne-based miner is trying to sell. BHP has had its Mount Arthur thermal coal mine in Australia’s New South Wales state up for sale for more than a year. It still hasn’t found a suitable buyer.

At this stage it’s likely that BHP might even pay somebody to take the mine, the biggest in New South Wales, off its hands, given the company slashed the value of the asset on Wednesday from about A$550m to a liability of A$275m, the Sydney Morning Herald reported. Just seven months ago the Mount Arthur mine was valued at more than A$2bn by BHP. The massive writedown in value has come despite the price of Australian thermal coal rising to the highest in 13 years.

The Newcastle Weekly Index, the benchmark thermal coal price, has more than tripled since its 2020 low of $46.37 a tonne, reaching $168.71 in the week to August 13, according to assessments by commodity price reporting agency Argus.

While there are costs associated with rehabilitation that any buyer would have to bear, the fact that BHP can’t seem to find a buyer for Mount Arthur in the best market for thermal coal since 2008 is telling.

Coal assets have largely become toxic, with South32 , the company spun out of BHP, ending up paying about $250m to offload its thermal coal mines in SA.

While it’s not a fait accompli that oil and gas assets will travel down the same path as coal, the risks are increasing that they will.

A renewed focus on mitigating climate change and rising concern about the environment among investors will make it difficult for oil and gas companies to attract shareholders and capital, even if the prices and demand for crude oil, natural gas and liquefied natural gas remain strong.

BHP may have exited oil and gas at just the right time. Its investment in the Jansen potash project in Canada shows that the company is more focused on commodities that will be needed in the future.

However, BHP may still battle to win over climate-sensitive investors given its status as the world’s biggest exporter of coking coal, the polluting fuel used to make steel.

While steel is essential to many products vital to transitioning the world from fossil fuels to clean energy, the process of making it is carbon-intensive — and likely to remain that way for some time to come.

Whether BHP will be able to mount an argument that coking coal is good for the energy transition, or at least a necessary evil, remains to be seen. However, it will likely have to commit to offsetting the emissions from the burning of its coal at some future point.