CARMEN NEL: What to make of negative interest rates 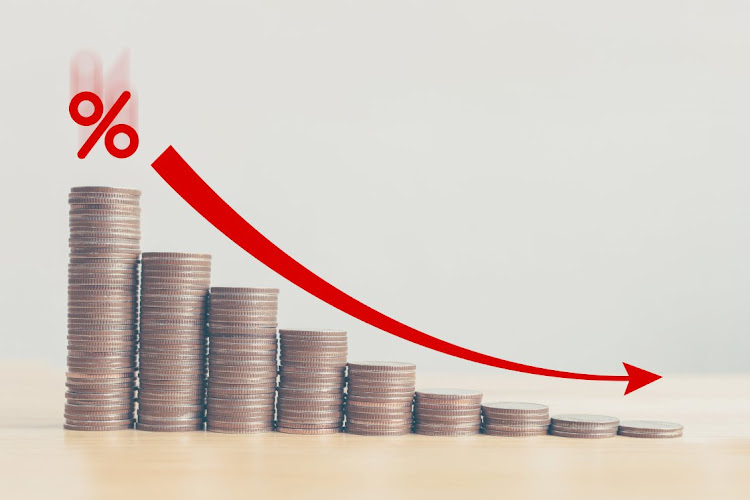 A decade ago few of us would have contemplated the idea of negative monetary policy rates, let alone negative market-determined bond yields.

Yet four of the world’s central banks have negative policy rates, while there is $16-trillion worth of bonds trading with a yield below zero. The entire German yield curve is now in negative territory. Even Greece, with a debt ratio above 200% of GDP and a sovereign credit rating equivalent to that of SA, has seen its yield plummet from 37% in 2012 to only 0.5% today.

The evolution of monetary policy — from zero interest rate policy to negative interest rate policy and quantitative easing — has contributed to the steady decline in developed market bond yields. Many central banks joined the asset purchase party during the Covid-19 pandemic in a bid to lower long-term borrowing costs and stoke risk appetite.

The efficacy of large-scale asset purchases, which over the past year-and-a-half has included not only government bonds but also corporate bonds, is still up for debate. The International Monetary Fund (IMF) is of the opinion that negative interest rate policy has succeeded in stimulating economies without posing a risk to financial stability. Yet this will be tested should bond yields and policy rates return to positive territory.

Since the global financial crisis in 2008/2009 the emphasis has been on the “return of capital” rather than “return on capital”. During times of elevated uncertainty investors prefer the safety of high-quality government bonds to preserve capital. It would seem that this capital preservation has come at an exceedingly high price.

It is perplexing that an investor would buy a bond at a negative yield (the bond yield and price are inversely related — the lower the yield the higher the price). It could be that the investor relies on the “greater fool theory” — an assumption that there will always be someone else who will buy the bond at an even more negative yield.

If our investor held the bond to maturity she would be locking in a capital loss. This is also relevant to retirement funds that would normally buy a bond because it is an income-generating asset and preserves capital. With a low (in the case of the US) or no (in the case of Germany) coupon on offer from developed market bonds, retirement funds have been buying low or negative-yielding bonds in the hope of capital gains or being forced to increase exposure to equities.

Pushing what should be relatively conservative portfolios further out the risk curve surely has financial stability implications. In addition, regulation has resulted in banks having higher exposure to government bonds which, perversely, reintroduces systemic risk.

Counter-intuitively, negative interest rates could be a form of policy tightening on an economy. Buying bonds at a negative yield means you are paying the government for the privilege of funding it — it is like a tax. Lower interest rates are meant to encourage people to spend more now, in effect bringing forward consumption. However, in ageing populations such as in Europe, retirees or those who are nearing retirement could end up saving more because of low or negative deposit rates. This excess saving further contributes to falling interest rates, which then forces other investors to hold even riskier assets.

This brings us to the interpretation of low or negative bond yields, which is sending a very different message to that from the equity market. Extremely low bond yields are signalling falling potential growth rates and falling neutral interest rates (the so-called R-star in economic literature). Yet developed market equities are telling us that the outlook is rosy, with elevated valuations.

They cannot both be right. Yet they are linked via valuation models that use the long-term bond yield to discount future cash flows. The lower the discount rate the higher the valuation, and so analysts can justify elevated multiples.

The crux is that market pricing is distorted. The intersection of demand and supply (the buyers vs the sellers) determines the price of an asset. In the US and Germany we have a case of excess demand for government bonds due to central bank asset purchases. The outsize role of central banks is distorting the fundamental signals from bond yields.

Despite all the talk of the US Federal Reserve slowing its asset purchases — the dreaded tapering — US yields have remained low due to the Fed’s actions. While this imbalance could be remedied by substantial fiscal stimulus and attendant borrowing, there is an incentive to keep borrowing costs low. This is because developed market debt is only affordable as long as interest rates stay well below the growth rate in the economy.

As such, financial repression is likely to continue to distort the market’s message. Unless the bond vigilantes return.

• Nel is economist and macro strategist at Matrix Fund Managers.

Our report urges much greater clarity in devising and explaining future adjustments to QE, writes Mervyn King
Opinion
11 months ago

BRIAN KANTOR: The news on GDP and growth is not encouraging

BRIAN KANTOR: The news on GDP and growth is not encouraging