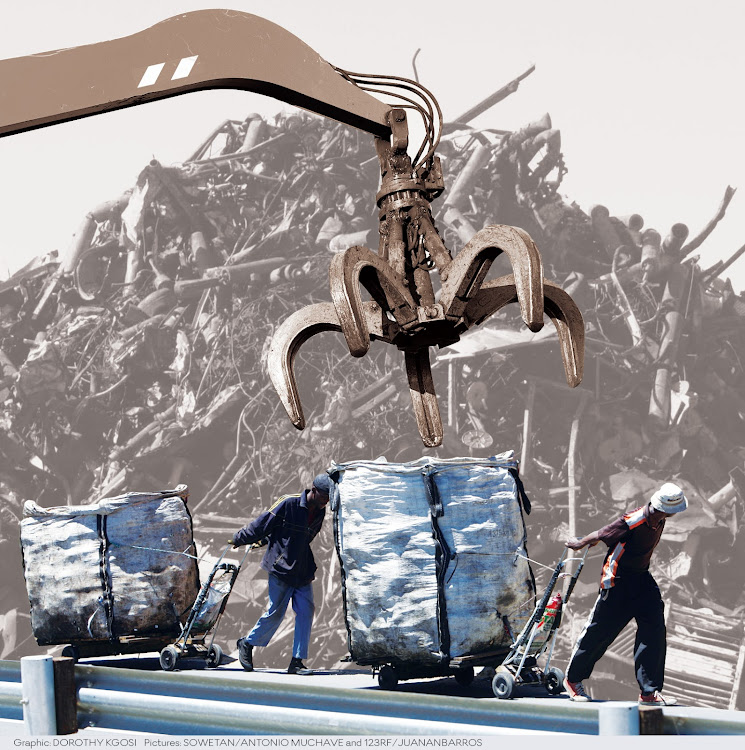 Trade, industry & competition minister Ebrahim Patel has just extended the price preference system (PPS) on scrap metal by two years. This system forces metal recyclers to first offer their scrap to domestic consumers at a large discount before they can get a permit to export. If a local consumer (mini-mill or foundry) makes an offer at the PPS price, the recycler must accept the offer.

This is a double blow for a sector that is bearing the brunt of Patel’s “localisation” policies. But the minister is, perhaps fatally, misreading the scrap industry as a source of feedstock for the new “transformed” mini-mill steel industry he is trying to resurrect in SA.

Scrap is not an infinite resource. It is mostly industrial waste and the manufacturers that produce it are constantly trying to reduce the volume. Patel’s own recently unveiled steel industry master plan believes there “may be an absolute shortage (that is, it is not an affordability issue) of as much as 1-million tonnes [of scrap steel] per year by 2021”.

This alarming note was designed to justify strict controls on the export of scrap, yet it completely disregards the facts on the ground. In 2019, the last year of full economic activity recorded, SA exported 524,000 tonnes of scrap steel worth about R1.9bn. But if the government now wants double the amount of scrap for its own programmes than the entire industry exported in 2019, where does it suppose the extra scrap will come from? Incoherent policy surely has no place here. Do we try to import more scrap? Surely not.

On August 1, in addition to the now-extended PPS, scrap metal will start attracting large export duties too. The plan was always to replace PPS with the export duties, rather than to add PPS to the export duties, yet that is what Patel has done. Now recyclers must sell at a discount locally and at a discount when they export. Don’t worry though: this cost is borne by the waste pickers, arguably one of the worst jobs in the country.

These 300,000 poor people will get paid even less for their scrap so that the shareholders of the 10 mini mills can benefit, an obscene transfer of wealth from the poor to the rich.

Then there is the manufacturing sector, which is in great shape after 15 months of lockdown and can easily cover the cost of subsidising a scrap-consuming sector that doesn’t seem to make money no matter how much support they are given.

Just the other day Scaw was losing R1bn a year and Cisco, a once large mini mill, is in business rescue, having chowed its way through R450m from the Industrial Development Corporation (IDC) in 18 months. Both Scaw and Cisco are beneficiaries of huge investments by the IDC, which is controlled, ultimately, by Patel.

Not only has the PPS extension not been made in good faith (though described in the most anodyne language as “complement[ing] and support[ing] the operation of the export tax”), it is also logically a terrible decision.

The idea to extend PPS did not hatch out of an egg at the department’s offices. No, this recommendation came from a “working group”. Who is part of this “working group” you may be wondering? We are wondering too, because Patel will not tell anyone who they are.

What information did they interrogate before making the recommendation? No idea. Maybe no information or maybe a whole lot. Why do they have special access to this information while competitors and consumers in the market do not? Good question, and perhaps one the Competition Commission should be asking.

The extension of PPS does not just apply to ferrous metals, which you would assume given that the “working group” is a subset of the Steel Masterplan Oversight Committee and you would reasonably expect them to provide policy guidance on ferrous scrap. This clandestine group of “advisers” also recommended the extension of PPS on non-ferrous scrap, even though the master plan doesn’t deal with non-ferrous metals. We are just moments away from the poultry sector providing a policy on pork and beef.

But wait, there’s more. The demand for scrap (ferrous) metal in the master plan is wrong, and the department knows this. It contains demand for 20,000 tonnes of ferrous scrap per month for Cisco (the failed mini-mill in business rescue since 2020). And should you think it reasonable that no-one could know about this, consider that Patel cut the ribbon when it reopened in 2018 but was absent when they closed again in 2019.

It was a heady 18 months of running at a gross loss, with the IDC frantically shovelling vast amounts of cash into the business for the whole period. Since its closure R10m worth of assets have been stolen, including half the vehicles that were on its balance sheet at the time it was placed into business rescue. Should Cisco get started up again, it alone would need to consume almost all the exported ferrous scrap just to turn a profit, if that’s even possible. Perhaps this is why the PPS is being extended?

If the errors are so large in the Steel Masterplan, how is this policy, and other localisation policies, formulated? There is no meaningful consultation. The companies doing the lobbying are unknown, so how can a rational decision emerge from such a process?

It is not clear at all how the recycling sector will remain profitable. And the pain will be most severely felt by the smaller, often black recyclers, which don’t have the balance sheet to ride out the storm. One will fail and then another. Some of the mini mills will buy them up, and others will be absorbed by bigger recyclers.

The industry will concentrate and competition will disappear. It will happen quickly. Lower value scrap will not be collected, with all the economic value having been sucked out of the system. That cheaper scrap will end up in landfills, creating yet more problems. And a few oligarchs will emerge, which I think might be the plan.

If you are not worried now, you should be. Those of you popping Champagne corks, know that you could be next. Today you are the pigeon, but tomorrow you could be the statue.