No matter how you look at it, a shrinking population is bad news 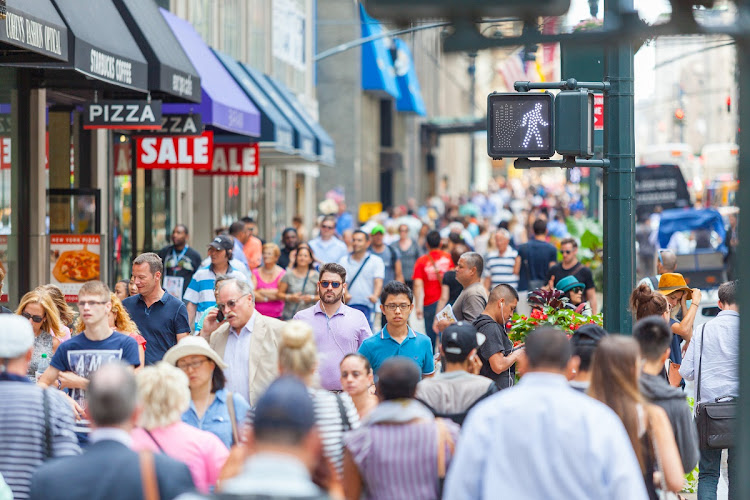 A crowded sidewalk on 5th Avenue in New York, US. Picture: 123RF/WILLIAM87

America’s population may be shrinking. That’s mostly because of Covid-19, but it’s also part of longer-term trends in fertility that show no signs of abating. These trends, which are worldwide, have already caused major economic dislocation and are likely to continue to do so.

First, some data. From 1936 to 1956, the US fertility rate rose from 1.8 to 3.2. At the peak of the baby boom, the average woman in the US was having at least three children who survived until adulthood. (A rate of 2.1 is considered replacement level, holding the population steady over time.)

The result was a huge generation that not only transformed American culture, but also created a market and labour pool for would-be entrepreneurs and growing corporations. From the 1960s through the mid-1980s, net domestic investment by private businesses averaged 5.4% of GDP each year. One dollar of every $20 spent in the US economy was directed towards expanding the size and scope of private enterprise.

After the baby boom, there was a baby bust. In 1978, the fertility rate was about 1.7, a near match for Great Depression lows. The fertility rate rebounded somewhat in the following decades, reaching a high of 2.1 in 2007 before starting its downward march to 1.6 in 2020.

Domestic business investment followed this pattern. From the late 1980s through the late 2000s, only once did it eclipse the previous generational average — just before the dot-com crash, in the second quarter of 2000, when it reached 5.6%.

Demographic shifts weren’t the only things affecting the economy over that period, of course. The rise of the internet, the growth of the Chinese economy and a regime shift in monetary policy all played their part. But it’s hard to overstate the impact of demographics, which were a steady tailwind of the US economy after World War II, then became a steady headwind in the late 1980s and have remained so ever since.

A lot of commentary on the economic effects of an ageing society focuses on the strain they will put on the entitlement system. There will be ever fewer workers to pay the benefits of an ever larger pool of retirees.

But the impact on the overall economy is more wide ranging. Without a growing supply of new workers, new private investment has a harder time generating consistent positive real returns. It’s no accident that market returns over the last 25 years have been dominated by the tech sector, which uses comparably fewer workers, while real interest rates on savings generally have declined.

An ageing, shrinking population creates national quandaries that are more than just fiscal. One is that, as the real return on ordinary physical investment falls, so does the interest rate necessary to keep the economy humming.

The developed world first saw this phenomenon in Japan, which had no postwar baby boom. Despite a technologically advanced, export-orientated economy, the Bank of Japan’s major policy rate fell steadily from 6% in 1991 to just 0.5% in 1995. Japan experienced an infamous “lost decade,” during which neither huge government spending nor persistently low interest rates could fully revive the economy.

That roughly matches the US experience after 2008. Indeed, Japan experienced an enormous property bubble in the late 1980s that burst and brought down the entire economy. This pattern persists because when businesses cannot generate enough profitable investment to match the savings rate of an older population, the excess ends up driving up the price of land.

In the formal economic models of this phenomenon — known as secular stagnation — land prices can theoretically go to infinity. In the real world, they are prone to bubbles.

A propensity for bubbles is another major problem resulting from declining demographics. Though the US has instituted tighter financial regulations in an attempt to mitigate against bubbles, the underlying pressure remains.

So, what can be done about all of this? My Bloomberg Opinion colleague Matt Yglesias collected many of the best suggestions in his book “One Billion Americans,” whose title succinctly expresses what he thinks the goal should be. Yet many of the most politically feasible ideas — such as increased government spending on child care and other support for young families — would offer only a modest boost in population growth. Meanwhile, the ideas that offer the greatest potential for population growth, such as comprehensive immigration reform, are the least politically feasible.

The upshot is that demographics are likely to be a major drag on the US economy over the next few decades. That means a sluggish, bubble-prone environment — and a non-trivial risk of another Great Recession. In other words: No matter how you look at it, a shrinking population is bad news.

Smith is a Bloomberg Opinion columnist. He was formerly vice-president for federal policy at the Tax Foundation and assistant professor of economics at the University of North Carolina. He is also co-founder of the economics blog Modeled Behavior.

‘Antiscience is arguably one of the leading killers of the US people, and yet we don’t … give it the same stature as global terrorism and nuclear ...
World
1 month ago

ICU admissions are high, but scientists caution against premature comparisons between the three Covid-19 waves
National
1 month ago
Next Article