The recent unrest could provide opportunities for remaking the country in a smarter, more sustainable way 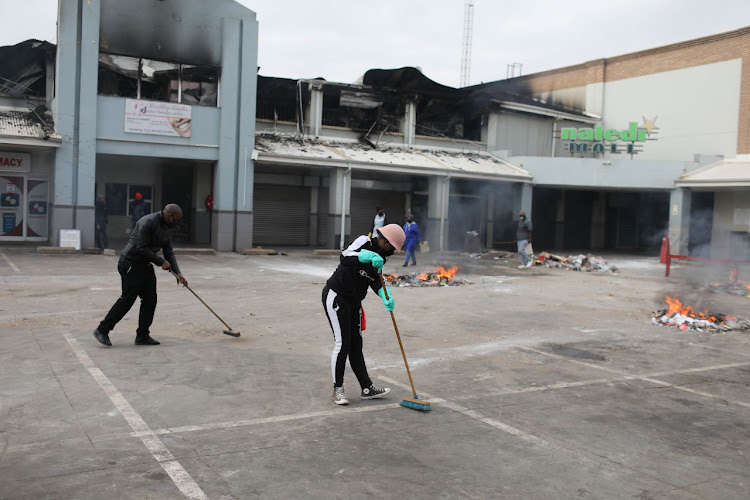 SA has yet to count the full economic and human cost of the devastating week of violent unrest in KwaZulu-Natal and parts of Gauteng. But much as the unrest will have a negative effect on the economy, there are also positives that have come of it. Most encouraging is that civil society stood firm against the looting and thuggery, and with support from the security forces ultimately triumphed. Now, it is up to other stakeholders to do their part to contain the damage.

The looting and physical damage caused to shops, malls, warehouses and production facilities are the direct effects of the unrest. To this must be added the indirect consequences, including the loss of sales and wages, industrial output and supply chain disruptions. One source has put the immediate economic cost of all this at R50bn. But this excludes another potentially deeper harm, which is to business and investor sentiment. If that is not tackled urgently the loss in domestic private fixed investment and foreign direct investment will far exceed R50bn. 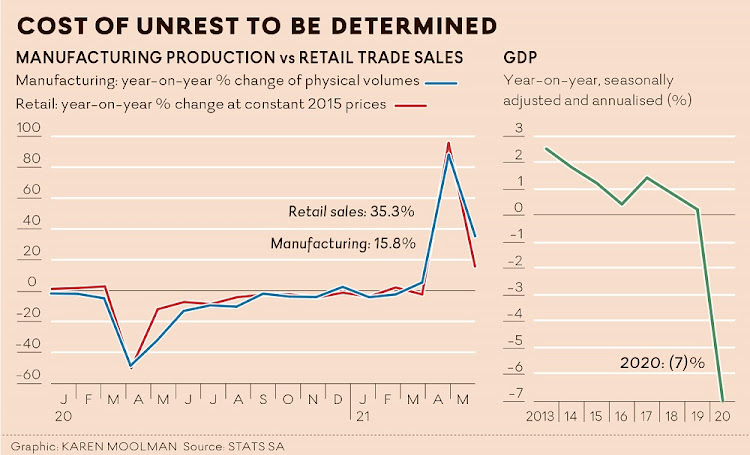 The unrest is a disaster for the country in so many ways. But from an economywide perspective, all is not lost. Though real output has yet to fully recover to its pre-pandemic level in the fourth quarter of 2019, many have been surprised by the speed and strength of the economy’s bounce-back from the height of the Covid-19 crisis in 2020. This reflects the country’s inherent resilience and is the backdrop against which the unrest occurred — of an economy not in recession, as it was just before the pandemic struck, but one that was on the mend.

There are other shock absorbers. The positive effect from restocking, replacement and rebuilding will go some way to cushion the blow of two weeks ago. Combined with the lockdown restrictions associated with the third wave of infections in July, the recent unrest has the potential to knock the recovery hard in the third quarter. But it need not be derailed beyond that, especially if SA can accelerate the vaccine rollout.

Looted businesses that have sustained only minimal damage and can open quickly will not only have to be restocked, but will also have to receive their regular stock. Shops shut for longer will create opportunities for unaffected ones in their areas, which will be busier than usual. Longer operating hours for them mean more profits, more income for existing staff, more frequent turnover of stock, and perhaps even new hires. Manufacturers and transporters of consumer and other affected goods stand to benefit too. All this will offset some of the direct and indirect negative effects associated with the recent mayhem.

A kicker will also come from rebuilding. Destroyed shops, warehouses, production facilities and infrastructure will detract from SA’s capital stock. In theory, this would lower the country’s potential growth rate. In practice, however, when these get replaced, GDP, which measures flows, will benefit from the investment necessary to fix and rebuild, which will in turn support construction and its downstream suppliers. It will also be beneficial if such replacement investment involves new productivity-enhancing technologies, as it likely will.

It is difficult to gauge how much will be reinvested, but early signs are encouraging. Media reports, corporate newsletters, and radio and television messages signal that big business remains committed to SA and is determined to emerge from this temporary setback stronger than before. Its efforts to work with the government to secure critical infrastructure and restore supply chains have also been inspiring. But corporate SA must go beyond replacing what was broken. It now has an opportunity to take its social responsibility even more seriously by helping small business and affected communities.

The fallout of the looting and destruction on small and medium enterprises, and on township economies in general, has been devastating. Most established businesses should have riot cover, and it is reassuring that President Cyril Ramaphosa mentioned in his Sunday address to the nation that state-owned insurer the SA Special Risk Insurance Association will be able to pay out swiftly and in full on all legitimate insurance claims.

The temporary tax relief measures Ramaphosa announced should also help affected businesses’ cash flows, as will the funding mechanism being designed to help the many uninsured smaller and informal businesses to reopen, restock and rebuild. The Treasury, SA Revenue Service, banks and development finance institutions have all seemingly come together to do the right thing.

During the unrest, trade, industry & competition minister Ebrahim Patel again relaxed competition rules, as he did at the start of 2020’s lockdown, allowing companies in essential sectors to collaborate to restore the flow of goods throughout the country. Municipalities in affected areas must now follow his example and relax building permits, licensing regulations and red tape more generally, to help speed up the rebuild.

As for the damage done to business confidence, the first step towards repair has already been taken. Foreign investors often look to SA companies for guidance — why should “we” invest if “they” do not? They will surely draw comfort from the speed with which local firms have stepped up to express their commitment to fix what has been broken and to continue doing business in SA.

But on its own this will not be enough to fully restore the country’s “soft infrastructure” — trust, goodwill and expectations of the future — unless policymakers, now more than ever, also fast-track the growth-boosting reforms they have long promised. The president’s address indicated that he has been motivated by the events of the past two weeks not only to build on the reform momentum already in progress, but also to take further steps. Disappointingly, however, he offered no details, promising only to make further announcements “shortly”.

We trust this will be sooner rather than later. Meanwhile, there are several urgent initiatives he could fast-track. His promise to free up licensing rules to allow companies to self-generate up to 100MW of electricity must be speedily followed up with enabling legislation. The partial privatisation of SAA must become the model to bring private players into other state-owned companies in financial distress.

Opening up broadband spectrum can wait no longer, while initiatives to improve efficiencies of the ports and railways are more critical than ever. It would help, too, to remove the distraction caused by long-threatened policy measures such as expropriation without compensation and National Health Insurance. Both are red flags to investors. And the president must ensure his ministers deliver rapidly on promises to hold to account those who orchestrated the violent unrest. The rule of law must be seen to be sacrosanct in SA.

Do all this and the harm done to investor confidence should be fleeting. Confidence may even improve noticeably, triggering the higher rates of economic growth and job creation SA so desperately needs. This would also permanently expand the tax base, creating the space for the government to fund relief for households and businesses that get left behind — while also managing the fiscus in a way that would support durable economic growth.

A deep recession coinciding with an increase in household savings. What gives?
Opinion
1 year ago

With countries worldwide relaxing lockdown restrictions only gradually, the pandemic could cut global trade volumes by as much as a fifth
Opinion
2 years ago

Hopes that a significant stimulus in China could lift SA from its growth slump are unrealistic. Better to zero in on challenges closer to home
Opinion
3 years ago