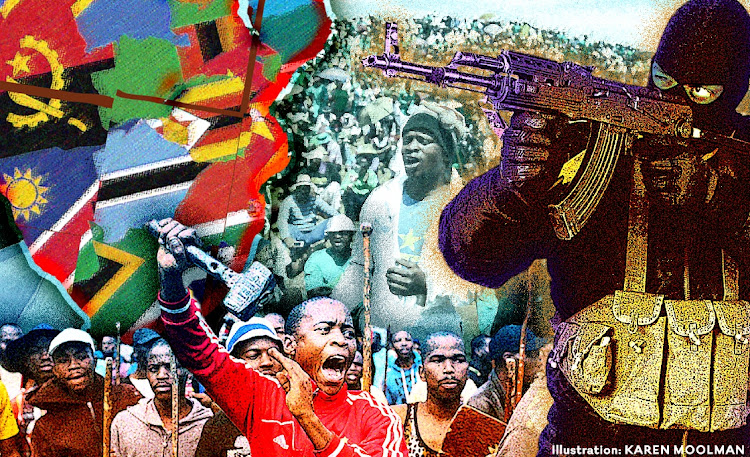 In the wake of violent unrest in SA last week, which followed hot on the heels of antimonarchy protests in Eswatini, alarm bells are being raised over the prospects of a “Southern African Spring” similar to the violent revolutions that rocked North Africa just more than a decade ago. Nevertheless, it is still unlikely that regime change will materialise, this is a region where there have seldom been power transitions. Leadership across the region willing to maintain “power at all costs”, thus prevailing conditions are fertile for continued volatility across Southern Africa. Illustration: KAREN MOOLMAN

In the wake of violent unrest in SA last week, which followed hot on the heels of antimonarchy protests in Eswatini, alarm bells are being raised over the prospects of a “Southern African Spring” similar to the violent revolutions that rocked North Africa just more than a decade ago.

Despite the fertile conditions that could inflame such actions, contagion appears unlikely. Instead of a sharp and sudden “spring” resulting in regime change,  investors should prepare themselves for a longer-term “winter of discontent”.

To be sure, the recent events in SA point to a broader negative trendline in the region, which is set to intensify until governance issues are dealt with. Though the specific drivers of unrest vary from country to country, the common thread is governance failures.

Policy missteps, widespread poverty and rampant corruption have fuelled both economic and physical insecurity. This has created a laggard subregion that is struggling to cope with the demands made by its citizens and the modern world. The implications, though less immediate, are weighty.

Current dynamics make for grim reading. Eswatini recently experienced its most violent antimonarchy protests since 2011, and will continue to face such pressures (despite piecemeal concessions) for as long as it has an unresponsive and uncaring government.

Chronic political instability in Lesotho will continue, and is likely to worsen ahead of the June 2022 elections. This threatens to dampen investor sentiment at a time when the country is seeking to attract capital to emerging industries such as renewables, diamonds and cannabis.

SA, the regional hegemon, has floundered despite the fanfare around the new Cyril Ramaphosa presidency in 2018. Economic reform remains stillborn amid continued policy inertia. Unemployment and inequality sit at record highs, state-owned enterprises are dysfunctional and debt-ridden, while corruption appears to be endemic.

Mozambique continues to battle deadly terror attacks, which threaten its gas boom, while a hangover from the sovereign debt crisis lingers. Zimbabwe’s leadership transition from Robert Mugabe to Emmerson Mnangagwa has flattered to deceive, resulting in an equally repressive regime, if not more.

Meanwhile, Zambia goes to the polls in August amid a democratic regression and having defaulted on its external debt obligations. Even Mauritius, historically lauded for its governance, last August experienced its largest demonstrations since independence, while its reputation as a beacon of transparency is under the spotlight after a string of scandals and blacklistings. All the while socioeconomic pressures continue to build.

To say the region is floundering is an understatement. In addition to underwhelming coronavirus containment responses and poor vaccination strategies, the countries in question exhibit a number of common features:

All of these challenges have established the conditions for conflict and disruptive change. While a  frustrated, jobless youth population with nothing to lose is certainly a key risk to stability, the cocktail of challenges has created opportunities for unsavoury elements to exploit. Where there are power vacuums with weak state legitimacy, organised crime thrives. This has most clearly been the case in insurgent-embattled northern Mozambique.

Given the relatively late independence movements there is still a significant ‘liberation dividend’, which most governing parties can leverage.

Nevertheless, it is still unlikely that regime change will materialise. For a start, this is a region where there have seldom been power transitions. Given the relatively late independence movements there is still a significant “liberation dividend”, which most governing parties can leverage. Though the gaps in popular support between incumbents and opposition are narrowing as the youth display less affinity to the old guard, the trend is still overwhelmingly in favour of parties such as the ANC, Frelimo, the Botswana Democratic Party and Swapo.

Curiously, disillusionment with the status quo does not necessarily translate to votes for opposition parties. Moreover, opposition parties generally do not have the resources or organisational clout to sustain momentum, or are too divided to mount serious challenges to incumbents — which can consolidate the political space by using state resources. Coupled with the strong grip on military power that these leaders maintain, this suggests that any internal threat can generally be managed.

In addition, with leadership across the region willing to maintain “power at all costs” they have not been shy to shut the internet or deploy heavy-handed tactics. Stacking the judiciary with pliant officials while stifling dissent are also commonly used tactics, as both Zambia and Zimbabwe have routinely demonstrated.

Then there are the vastly different systems of government in each country. The freedom, transparency and broad range of avenues for democratic expression available in SA are the exception rather than the rule across the Southern African Development Community region. Regressive politics dominates the broader region, most notably in Zimbabwe. Eswatini is an absolute monarchy, while Lesotho is a hybrid system. This lack of homogeneity in political systems and governance structures — as well as cultural and linguistic differences — make sweeping change difficult to envisage.

Taken together, these dynamics make a “Southern Africa Spring” unlikely, but it is possible that a winter of discontent could morph into something more systemic. To this end the fortunes of the region hinge dramatically on the success or failure of SA. A distracted and dysfunctional regional hegemon will trigger a host of negative consequences for neighbouring countries, whose military, financial and economic dependence on SA cannot be overstated.

For investors, the question is therefore less about the short-term risk and more about the longer-term implications of the current regional unrest. The prevailing conditions are fertile for continued volatility, and there are no clear signs from governments that the root causes are being decisively tackled. Somewhere in between the dichotomous sense of complacency and alarm, a recalibration of the region’s risk profile is required.

• Gopaldas is a director at Signal Risk.

Amid concern over SA yet optimism too, investment is hobbled by continued uncertainty
Opinion
1 year ago

In 2020, the continent was battered by Covid, conflict and a commodity price rout. What lies ahead?
Features
1 year ago