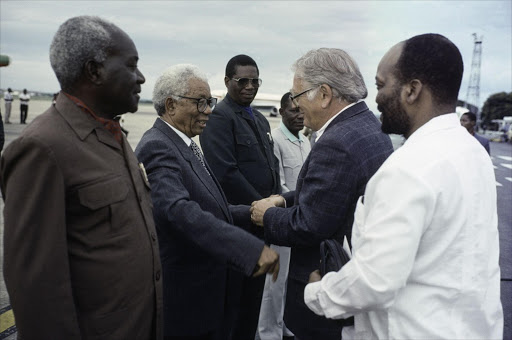 Over the past 27 years, having inherited a mixed bag of challenges and assets, with the world willing us on and open cheque books proffering investment and loans, successive ANC governments have worsened inequality and barely dented apartheid’s spatial arrangements.

It is common cause that our public health infrastructure and capacity is reeling under the pressures from Covid-19, and our education offering is in disarray and decline. The jobless rate has risen to 32.6% in the first quarter of 2021 from 32.5% in the fourth quarter of 2020, and about 18-million South Africans vulnerable to poverty are dependent on social grants.

Add to this the internecine strife in the ANC, which has spilt over into society with disastrous effect, the almost uniform failure of our key state-owned enterprises, the industrial scale of corruption and the raft of failed statist policies, and we find ourselves in the most parlous of places, notwithstanding the slack cut by the commentariat to every ANC government promising nirvana.

And still, inexplicably, national election after national election the ANC holds on to a majority that delivers nothing but diminishing returns. Perhaps, not inexplicably, large swathes of the media have been repeatedly complicit in helping the ANC maintain this madness despite the rational arguments and empirical facts that fly in the face of any cogent analysis.

But there’s more to it, and that involves not simply the debunking of the developmental myth and loosening of the liberation mantra; it requires a reinvention of the opposition to present its own emotional appeal that will allow the rational appeal and utilitarian value to be cemented in cognitive trust.

To this end, I wish to answer the question of why I joined the opposition; why I left the ANC — or why the ANC left me. In doing so, I am careful not to throw the proverbial baby out with the bathwater. The rationale behind this is not expediency. It is instead informed by the complexity of our heritage and warns against the danger of exclusive ideological purity that both the Left and the Right are wont to pursue.

If not throwing the baby out with the bathwater warns against an avoidable error in which something good is eliminated when trying to get rid of something bad, or in other words rejecting the favourable along with the unfavourable, the question arises: what is good?

Take, for example, two communists — Joe Slovo and Ruth First — who I was privileged to know through familial and political connection. Slovo was a doctrinaire communist, tending in my view to what Lenin characterised as “Left-wing communism — an infantile disorder”, while First, Slovo’s former wife, was a reflective Marxist and a deep and practical thinker. Slovo supported the Soviet invasions of Czechoslovakia and Hungary; First was firmly critical thereof. Both gave their entire lives to the struggle for freedom; First was assassinated by the apartheid regime and Slovo lost his battle with cancer.

I flirted with Marxism in my youth but came to the realisation as time went by that freedom and a practical liberal adherence to its essential tenets of individual freedom and individual rights, civil rights and human rights, democracy, secularism, freedom of speech, freedom of the press, freedom of religion and a market economy were the cornerstones of civilisation.

This didn’t mean I discounted the contribution of Slovo and First in helping bring the apartheid regime to an end, though it must be said I had more respect for First’s views even though they were at odds with my own essential view. Therein lies the paradox. It is unarguable that First and Slovo contributed to the essential dignity of black and working people in this country, but the policies championed by Slovo in particular were, in my view, disastrous and responsible for much of which is described in the opening paragraphs of this article.

The evolution of my political ideology does not preclude the welling of tears when I hear the lyrics of Senzenina or Die Stem being sung, when I listen to the plaintive songs with socialist overtones of Victor Jara, who was murdered by the Pinochet regime in Chile. My liberal opposition to statism and its socialist roots doesn’t stop me being moved by the rousing music of Mikis Theodorakis, who was politically associated with the Left and had long-standing ties with the communist party of Greece, or even the emotions evoked by the song Bella Ciao, an Italian protest folk song that originated in the late 19th century, sung by the mondina workers in protest at the harsh working conditions in the paddy fields of northern Italy. Versions of Bella Ciao  continue to be sung worldwide as an anti-fascist hymn of freedom and resistance.

It is, therefore, necessary to learn to embrace paradox and engender a connection with what sits in the emotional breasts of people, their music, their heroes — not just the unassailable Mother Teresas of this world, Nelson Mandela, Steve Biko, Martin Luther King and those of that ilk, but also the more complex repositories of political paradox.

If we continue to rail on high principle, without any understanding of paradox, against the veneration of individuals in history; if we dismiss the emotive lyrics from specific historical struggles; if we are unable to find common cause in the historical contribution of those fashioned in a particular world context, we will find it hard to connect — and connection at a visceral level is what politics is about. It’s not about losing an identity, it’s about finding one.

CHRIS THURMAN: Getting to the heart of what it means to be Orwellian