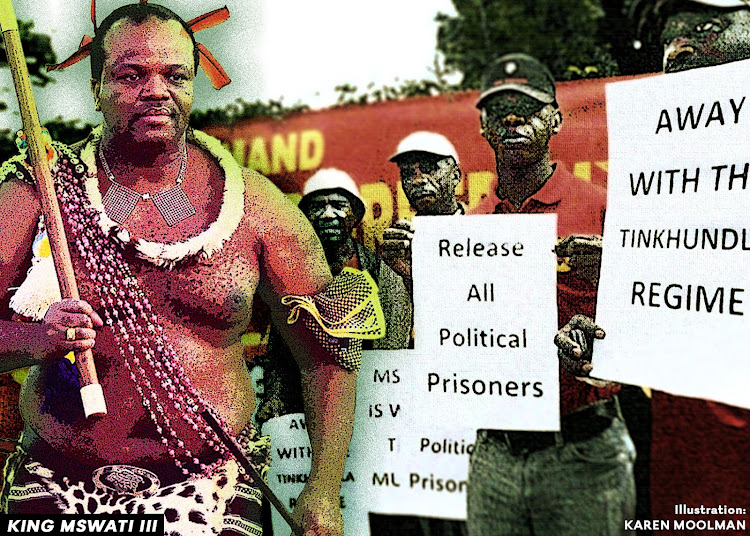 The political tides are changing in Eswatini as the country’s monarchy faces increasing public resistance. Over recent months SA’s tiny northeastern neighbour has been gripped by large-scale street protests, many of which have turned violent. Activists have demanded an end to the monarchical system in which the King, Mswati III, has the power to appoint the prime minister and the majority of the country’s ministers and senators, and can dissolve parliament at will.

These protests can be traced back to mid-May, when activists took to the streets to march against police brutality after a student, Thabani Nkomonye, was allegedly killed by police.

During Nkomonye’s memorial service on May 21 activists organised a peaceful protest. Security forces are reported to have responded by firing rubber bullets and teargas at peaceful demonstrators and mourners alike, putting Nkomonye’s mother, among others, in hospital.

The protests spread, and as they did the organisers made it clear that they were no longer simply challenging police brutality but were demanding democracy.

Events escalated further in mid-June after three dissident MPs advocated for democratic reform in parliament. In response, citizens countrywide marched to the offices of their local MPs to hand over petitions demanding support for the proposed reforms. In response, Mswati issued a decree through the acting prime minister to ban the delivery of petitions. Protesters resisted the order and the situation deteriorated as police responded with increasing violence while protesters began burning facilities owned by businesses linked to the king.

Throughout this period the state’s response to prodemocracy activism has been marked by the use of live ammunition, abduction, torture and other acts of state-sanctioned terror against activists, journalists and dissident MPs. There have also been reports of security forces indiscriminately firing live ammunition at innocent bystanders who were simply near areas where rioting was taking place, and that soldiers have been going door-to-door in certain rural areas assaulting people in their homes.

Despite this brutality the Southern African Development Community (Sadc) has failed to condemn the regime and has shown remarkably little solidarity with activists.

The methods employed by some protesters have involved destruction of property. But their goal of attaining a liberal democratic society in Eswatini is in line with the Sadc’s Protocol on Politics, Defence & Security Co-operation, which explicitly aims to “promote the development of democratic institutions and practices within the territories of state parties”.

On July 2 the chairperson of the Sadc Organ on Politics, Defence & Security released a statement on events in Eswatini that not only failed to express sympathy with the aims of the protesters but appeared to blame them for disrupting the status quo.

The statement read that “disturbances have resulted in widespread destruction of property [and] injuries to people, with at least one death reported”. Consequently the Sadc urged “all stakeholders to channel their grievances through the established national structures”. The statement had a clear pro-regime bent.

Protesters had been using the “established national structures” to “channel their grievances” (specifically that living under a medieval-style monarchy is undesirable). They had done this by handing in petitions to local MPs to demand that they support democratic reforms through parliamentary channels. It was the regime that banned these “established national structures”.

The Sadc statement did not acknowledge this background. It simply started from the point at which protesters began burning property after the ban had been instituted.

The statement also failed to acknowledge how obviously reasonable the protesters’ demands are, and how brutal the state’s response to them has been. It appears to do this intentionally by, for instance, understating the number of people who have been killed by security forces.

On the same day that the Sadc released its statement acknowledging that at least one person had died (without ascribing responsibility to anyone for the death) Amnesty International confirmed that at least 20 people had been killed directly by security forces. Others put the number even higher — according to local opposition group Pudemo the number was already more than 40 by July 2.

After releasing its statement, the Sadc organ dispatched a team to Eswatini, comprising the international relations ministers of Botswana, Zimbabwe and — most importantly — SA, Eswatini’s biggest trading partner.

The team arrived on July 4 and spent the day meeting state officials and apparently handpicked civil society representatives. Critical civil society actors, opposition groups and dissident prodemocracy MPs were excluded (though a few such groups managed to gatecrash the meeting at the end of the day). The mission thus represented a continuation of the Sadc’s acquiescence to the regime.

Despite the Sadc’s pro-regime approach thus far, there are now opportunities for it to change course. The Sadc organ returned to Eswatini on Thursday and is planning to stay in the country for a full week. It is essential that this mission adheres to the Sadc’s own liberal democratic guiding principles.

To do this the Sadc team needs to meet opposition parties and activists, as it has promised to do. It needs to make clear to the king that it supports the aspirations of the protesters that are consistent with the objectives of its own policy documents.

It needs to emphasise that Eswatini will be diplomatically isolated if it fails to make way for a democratic transition.

And it needs to assert that the continued use of live ammunition against defenceless protesters will elicit an arms embargo (this final message would be particularly impactful from the mouth of SA’s international relations & co-operation minister, Naledi Pandor, since virtually all of Eswatini’s arms imports in 2019 came from SA).

Anything short of this will amount to a failure by the Sadc organ to abide by its own liberal democratic principles.

• Copelyn is a researcher now affiliated to the Centre for the Study of Violence & Reconciliation.