Acts of treason and sabotage against people, property and the economy need to be dealt with swiftly and decisively 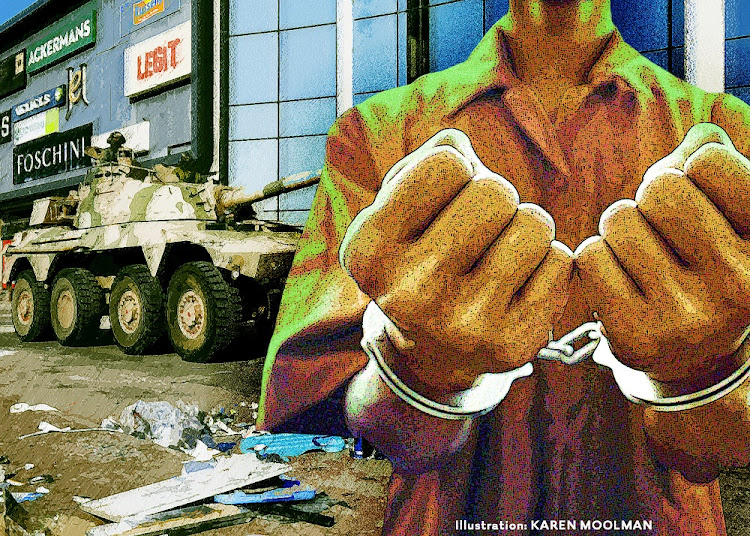 The treasonous behaviour of the “Dirty Dozen” individuals within the ANC, in their attempt to bring the country to its knees by creating mayhem, looting, destruction of property and instability — probably to avoid their day in court — is the lowest point in our 27-year-old democracy.

It is reminiscent of The Guilty are Afraid, a 1957 thriller novel by British writer James Hadley Chase set against the background of a rich gangster-ridden city on the American Pacific Coast. Let us not allow ourselves to be used by known thieves who are running scared, petrified at the sudden realisation that their time of looting is over, and that the time for them too to go to prison has finally arrived. As South Africans who have endured so much we know we are better than this, and certainly deserve much better than this.

Though not totally unexpected, the events of the past week have taken us by surprise and left us stunned, scared, confused, traumatised and afraid. Even though limited largely to two provinces, KwaZulu-Natal and Gauteng, the economic devastation will affect the entire country (and region). The process that culminated in former president Jacob Zuma being sentenced to 15 months in prison took at least three months, thereby giving the security forces more than enough time to prepare for this eventuality.

KwaZulu-Natal has a well-documented history of violence, from the 1980s through to the period leading up to the first democratic elections in 1994. The seeds of violence were sown and have lain dormant; the risk of insurrection has always existed. Of late a precedent has been set of mafia-like groups threatening construction companies, property developers and even state-owned enterprises and either demanding free equity, that only individuals from their group be hired, or that only funeral undertakers from KwaZulu-Natal be allowed to bury people in the province.

There was also the tragic assassination of Richards Bay Minerals general manager Nico Swart, in broad daylight. This precipitated Rio Tinto declaring force majeure. No action was taken when members of the disbanded MK Military Veterans Association defied the national disaster regulations and gathered outside Nkandla, most neither wearing masks nor social distancing.  Upon delivery of the Constitutional Court judgment against Zuma the former president followed suit, marching and singing along with the members of the “Zulu regiments” who converged on Nkandla — without wearing a mask.

There has been just one arrest to date of the 12 known instigators of the looting and destruction, despite intelligence officials apparently being in possession of cellphone numbers, tweets and videos they posted to deliberately inflame tensions and make the country ungovernable. If we are to unite and start rebuilding the economy, such acts of treason and sabotage against people, property and the economy must be met with the full and unequivocal might of the law. The law enforcement agencies must immediately arrest those who have fomented this heinous crime against the people.

These events lay bare the shortcomings of a SA Police Service that is supposedly intelligence-led but is underresourced, ill-equipped and badly trained, its finances and networks decimated by the “nine wasted years” of state capture. Caught off guard, the police soon ran out of essential equipment, cars, uniforms, bulletproof vests, rubber bullets, teargas and ammunition. They had no capacity to anticipate, prepare for and proactively implement preventive measures and were unable to process intelligence shared from multiple outside sources, including the co-operation extended by the private security industry.

It was heartening to witness community policing forums (not vigilantes), members of the community and the SA Taxi Association stepping in to defend shopping malls and warehouses located in their areas. It is also interesting that the malls that survived were those where mall management had cultivated close relations with the communities they served, investing time and effort to engage through community liaison officers, councillors, amabutho and military veterans living in the areas.

There is no doubt that unprecedented economic damage has been done. The focus in the immediate term must be on restoring normalcy, and over the longer term on pre-empting similar challenges to law and order. All social partners should collaborate to the extent possible with government and the security services to thwart further criminality.

The worst affected parts of the country went into the weekend facing the prospect of long queues to buy basic necessities, including fuel and medicines. Distribution channels have been severely affected and in some cases crippled for weeks or months to come. Panic buying can only worsen what is already a dire situation.

Coming in the middle of a third Covid-19 wave caused by the Delta variant, the events of last week were the very definition of a super-spreader event. The destruction of distribution centres and warehouses has also led to visible and regrettable disruptions to the vaccine rollout and deliveries to hospitals. Basic services were already severely compromised in many municipalities, and with critical economic infrastructure now damaged the situation can only get worse.

This has demonstrated beyond any shadow of doubt the intersectionality of ethno-tribalism, rampant criminality and genuine economic desperation among ordinary South Africans. Having been buffeted from all sides by state capture, recession, ratings agencies’ downgrades and the coronavirus pandemic, our resistance and resolve has been severely thinned and hugely compromised.

The task of urgently addressing the stubbornly high levels of unemployment in SA, which has led to increasing levels of poverty and inequality, has become more urgent than ever. As was demonstrated last week, it does not take much to either trigger or instigate insurrection.

SA cannot afford to ignore the events of December 17 2010 in Tunisia, when 26-year-old street vendor Mohamed Bouazizi set himself alight in the dusty provincial town of Sidi Bouzid in protest at the seizing of his vegetable stand by police for failing to have a permit. He had refused to pay a bribe and been slapped by a policewoman.

The outraged reaction to Bouazizi’s desperate suicide sparked a popular revolt behind the slogan “Pride and poverty”. The “Arab Spring” that followed brought down governments and ushered in an era of political chaos and instability in Egypt and Libya, while Syria descended into civil war.

• Mohale is chancellor of the University of the Free State, professor of practice in the Johannesburg Business School College of Business & Economics, and chair of Bidvest Group and SBV Services. He is a former president of the Black Management Forum and author of  ‘Lift As You Rise’.

Despite the destruction that raged through SA's streets this week, there is much that should fill our hearts with hope, writes Marc Lubner
Opinion
10 months ago

PETER BRUCE: State of emergency is too much — unless your wife has run out of petrol

Cyril Ramaphosa blinked, leaving a mall-sized void between ducking the public and a massacre
Opinion
10 months ago

We are in extraordinary circumstances, but the usual employment law and health and safety considerations apply
Opinion
10 months ago
Next Article

CHRIS THURMAN: When the dam breaks, who can stay dry but the wealthy

CHRIS THURMAN: When the dam breaks, who can stay dry but the wealthy