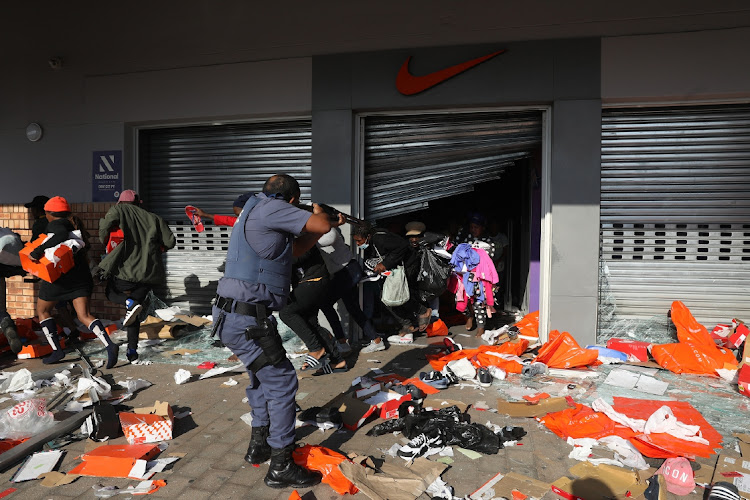 People looting a shop in Durban flee from a policeman on July 12 2021 as riots continue, under the hashtags #FreeJacobZuma and #KZNShutdown on social media, in KwaZulu-Natal and Gauteng. Picture: SANDILE NDLOVU

If the events of the past few days had been a conventional war SA would be in dire straits, grovelling before a victor whose military conquest would have been swift and resounding. The threat this time was internal, inextricably linked to underlying socio-economic issues, worsening inequality and grinding poverty. Compounding the multilayered crises is an overarching crisis of governance which was laid bare before the entire world.

In a dark and hypothetical scenario of war, SA’s national security would have been devastatingly imperilled. The security cluster fumbled for days before convening a press conference that did little to allay national anxiety or assure the citizenry that a well co-ordinated plan would be executed in urgent fashion. The SA National Defence Force, SA Police Service and State Security Agency ministers appeared flustered and rudderless, issuing statements that betrayed poor co-ordination behind closed doors and, at worst, a lack of preparedness when confronted by a crisis of this magnitude.

From a geostrategic perspective SA is fortunate in that it is situated in a region where it is the hegemon and hence a swing state when it comes to shaping the patterns of amity or enmity. The downside of its outsize profile in international relations at the subregional level is that any internal commotion has spill-over effects in the entire southern African region given the interconnectedness and shared risk environment across the region.

Geography may be a saving grace in the case of a hypothetical war. Alternatively, if SA was situated in a volatile region with hostile enemy states of equal or higher military capabilities or hard power resources, the likelihood of invasion would have been veritably multiplied. There has been a plethora of analysis about the dismal state of SANDF for a host of reasons ranging from ageing equipment to a dwindling defence budget and an unwieldy ratio between funding of personnel, operating costs and capital. Similarly, the State Security Agency has seen a hollowing of institutions, shortfall in capacities and increased vulnerability to politicisation at the cusp of state-party configurations and bureaucratic factionalisation.

A stocktaking of crucial lessons is imperative at this juncture, for national security issues and also the primacy of foresight and preparation. The state security minister may have been loathe to admit alleged intelligence failures, but in the minds of national security experts and military strategists the time lag between policy directives and tangible action on the ground points to deeper problems of a lack of strategic preparation, tactical blunders and absence of unity of effort in re-instating rule of law and preserving order in the face of collective failure of the magnitude witnessed.

For a keen observer with nefarious interests the gaps in national security strategy, the slow response of security actors to regain control amid spiralling disorder, and the disconnect between intelligence and operational dimensions are weaknesses that could be exploited in a potential invasion. The hard questions need to be asked: in this scenario where the bulk of the armed forces are occupied with quelling internal unrest, is SA safe from an external invading force?

This is crucial in light of the insurgency that has gripped neighbouring Mozambique, where violent, extremist nonstate actors may be on the lookout for strategic wins and openings to exploit. For the security sector it cannot be business as usual. SA should not allow itself to be ripe for the taking or falling prey to malevolent actors who may gain a tactical upper hand by exploiting vacuums or gaps.

Classical military thinkers such as Sun Tzu and Carl von Clausewitz emphasised the importance of preparation and planning for war, and their lessons remain relevant for contemporary times. In the age of globalised, mediatised and privatised war and transnational challenges, a country’s state of readiness and military clout are open to broad examination and critique. SA’s state security policymakers should view the unrest as a forewarning and prime moment to remedy exposed shortfalls and flaws in the national security strategy and capacities, or risk losing domestic legitimacy and respect in the international arena.

• Mabera is a senior researcher at the Institute for Global Dialogue, where she oversees the foreign policy analysis programme.