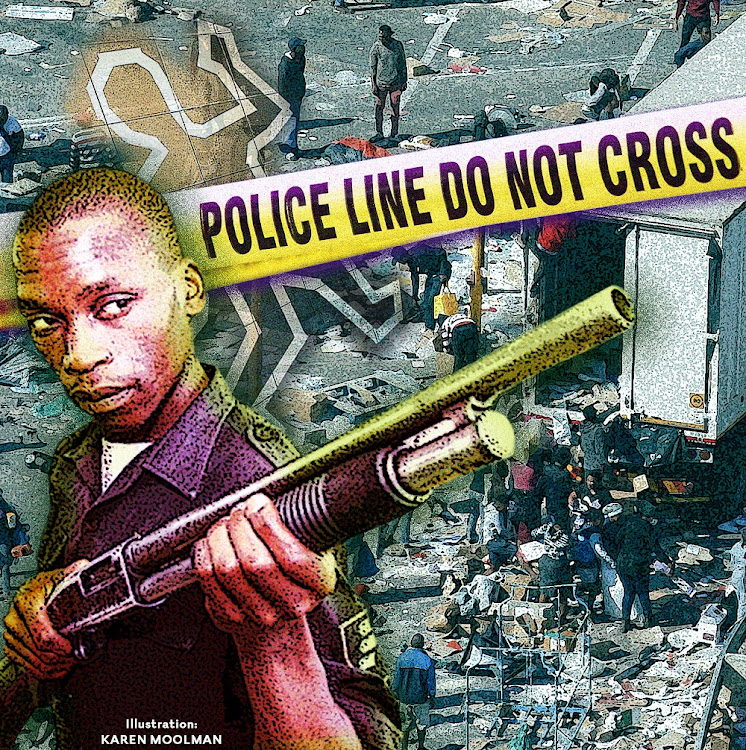 Many people are offended by any characterisation of the violence and looting unleashed in SA this week as poor and hungry people taking advantage of the chaos to grab food and other basic necessities they ordinarily have limited access to. They point to the visuals of flat-screen TVs and other luxury items being stolen, and the obvious evidence that opportunistic criminality has hijacked the unrest for its own motives.

But the “poverty/criminality” binary is a false debate. The violence can be driven by both legitimate desperation and criminal opportunism. We are after all a society beset by both. Acknowledging that there is legitimate anger in SA about our scandalous levels of poverty and inequality, and that hunger leads millions towards desperation and not caring about the broader consequences of violent looting, is not the same as excusing violence. Nor does tarring everyone with the “criminals” brush make the reality of economic desperation go away.

We have seen enough of this in SA over so many years that we should have learned by now that it is our reality, and we should be asking and answering the bigger questions around why we are here, and why it is getting worse, not better. Today the anarchy is triggered by the incarceration of Jacob Zuma (whose fate is irrelevant to the bitter resentments of most of the looters), but months ago it was the “influx of foreigners”, and below-living standard wages before that, and a breakdown of services to local communities before that.

What this tells us, again, is that we are living not so much in a democratic republic but a powder keg, a place of indescribable tragedy and sorrow. This is a place where inordinate wealth exists cheek-by-jowl with grinding, dehumanising poverty. Barring a radical change from its current political and economic trajectory, SA is a wholly inviable society. That is the reality neither our governing party nor our elites generally seem able to grasp.

Knowing this, President Cyril Ramaphosa’s response to the crisis, while understandable, is wrong-headed. While there is lawlessness (an all too present reality in SA) that must be addressed, Ramaphosa is wrong to treat the problem only as a security challenge. Military deployment is risky for the following reasons:

It is not too late to bolster this response with other, more sustainable long-term solutions, even now. In the main, the people who are calling for a political as opposed to securocratic response do not mean we should negotiate with looters and agents of lawlessness. Nor do they mean Zuma should be released from prison (which is legally untenable and wouldn’t stop the looting anyway, since it is not about the short-term incarceration of a geriatric delinquent).

At its most cogent, the call for a political response is a plea to our political authorities to deploy what little moral, political and economic capital they have left to address the long-standing grievances of the majority of South Africans, who yearn for a democracy that not only protects their civil rights as guaranteed in the Bill of Rights, but fulfils the promise of 1994 in its entirety. We cannot glibly assert the primacy of the rule of law while ignoring the rule of justice (in all its manifestations, political and economic).

What we are seeing play out in SA is widespread societal desperation. Sadly, nothing said by Ramaphosa would have soothed that desperation. In fact, nothing that is in the government pipeline will do anything to stem the desperate anarchy of people who no longer trust that their elected (as well as unelected) leaders care about their fate.

But it can still be stopped. The deep wounds can still be bound and salved. The question is, do we have the vision, the boldness, the original solutions, and the courage to do so? Personally, and I don’t say this lightly, I don’t think the ANC can. I doubt any of our current political class can. But what about the rest of us?

• Mde, a former journalist, spokesperson for the trade & industry minister and consultant to Telkom, is a founder of LEFTHOOK, a Johannesburg-based research and strategy consultancy. He writes in his personal capacity.

Police have arrested 1,234 people in Gauteng and KwaZulu-Natal in connection with the riots
National
11 months ago

ANC’s deputy secretary-general says violence that has erupted in the wake of former president Jacob Zuma’s imprisonment is a ‘bid to delegitimise ...
National
11 months ago