By the end of Tuesday the unrest in parts of SA had claimed 72 lives, with hundreds of people injured, countless businesses and jobs looted out of existence, vehicles burnt and buildings razed to the ground. The televised images of the unrest looked all too familiar to some and apocalyptic to others.

With heightened anxiety among those who have lost so much — and those who still stand to lose a lot if the violent unrest continues — some in the business community and civil society organisations have started to motivate for the president to blow the dust off section 37 of the constitution and declare a state of emergency.

It is unclear whether the proponents of this course of action want this to be a regional or national state of emergency. However, they appear to believe a state of emergency will give the president miraculous powers and access to more resources to bring the situation under control. Unfortunately, this call is both misleading and misplaced.

Seemingly, those calling for a state of emergency imagine and hope it would mean more military and police boots on the ground and perhaps, for good measure, a stay-at-home order. Essentially, a kind of politically charged lockdown level 5. But this could clearly be achieved without having to resort to a state of emergency. We are already in lockdown level 4 in terms of the pandemic state of disaster restrictions, after all. If more military boots on the ground is all that’s needed to quell the unrest, the call could be limited to pressuring the president to deploy more soldiers to hotspots. In this context a call for a state of emergency is simply unnecessary.

For a state of emergency to be effective President Cyril Ramaphosa will need the full confidence of the governing party, along with social and political consensus. If he had all those he would not need to declare a state of emergency to begin with. But as we know, any social and political capital Ramaphosa had at the start of 2020 that might have allowed him to govern through consensus has been squandered.

Ramaphosa addressed the issue of violence and unrest on three different occasions between Sunday morning and Monday evening, mainly through lengthy, platitudinous speeches. They were spectacularly ineffective. He either said the wrong things and has no idea what to say to meet the moment, or he no longer has any compelling authority. Both, unfortunately, point to a leadership vacuum that a state of emergency won’t fill.

So what would bring calm if not a state of emergency? The answer lies in the root causes of the unrest. What is playing out stems from a multiplicity of complex issues. Trying to deal with it solely and primarily as a security issue through a state of emergency declaration is reductionist at best and lazy at worst. That is not to say we don’t have a security crisis on our hands — we clearly do. But that crisis is unfortunately foreshadowed and overshadowed by SA’s ubiquitous inequality and poverty problem, which manifests in hunger and indignity that inspires desperation and opportunistic looting and vandalism.

Coupled with that is chronic political opportunism, with ANC factional battles undermining executive authority and a state security and intelligence outfit that is clearly actively working against Ramaphosa. This has been a problem for him from before he became president and has not been resolved in the years that have passed. But it needs to be dealt with now if we are to prevent a repeat of the past few days. While this cannot be achieved overnight, there are some interventions that can be made to calm tensions on the ground.

The president should immediately announce the reinstatement of temporary relief grants, and more generous than the last round if at all possible. Many unemployed and destitute South Africans who relied on those R350 grant payments to feed themselves during the initial pandemic-inspired restrictions and lockdowns are now without any form of income, with no prospect of attaining any form of employment in the foreseeable future. For people in this predicament the opportunity presented by chaotic unrest is hard to resist, and looting becomes inevitable.

Once you give people a valid reason not to loot you can more clearly identify those who are participating not out of desperation but due to political factionalism or to actively attack the state by destroying key infrastructure through what are increasingly obviously co-ordinated attacks. In that way security resources can be optimised and used more efficiently than at present.

But even if that is done and the dust settles, the country, collectively, needs to think long and hard about the leadership crisis that has been exposed through this eruption of anarchy. What is required to deal definitively with poverty and inequality is decisive leadership that is focused on the task at hand rather than factional manoeuvring.

With about 70% unemployment among young South Africans we are sitting with a generation that is so deeply downtrodden they feel they have no stake in the country and therefore nothing to lose and nothing to protect.

As things stand there is no shortage of potential catalysts that could spark similar outbreaks of lawlessness anywhere in the country and again push the national supply chain and businesses to the edge.

More than 2,500 soldiers have been deployed to Gauteng and KZN to quell violent looting, but SA is not yet considering a state of emergency, says  ...
National
2 weeks ago

Riots have cost retailers R5bn, while logistics companies have lost R300m in the carnage
National
2 weeks ago

Ramaphosa concedes violence is being fuelled by economic grievances 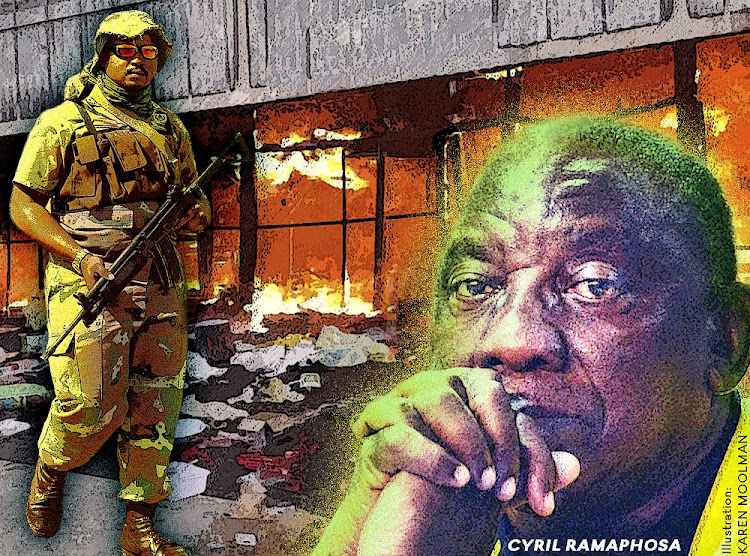