Underfunded defence force will be able to head off some challenges with good, timely intelligence and focused, quick response 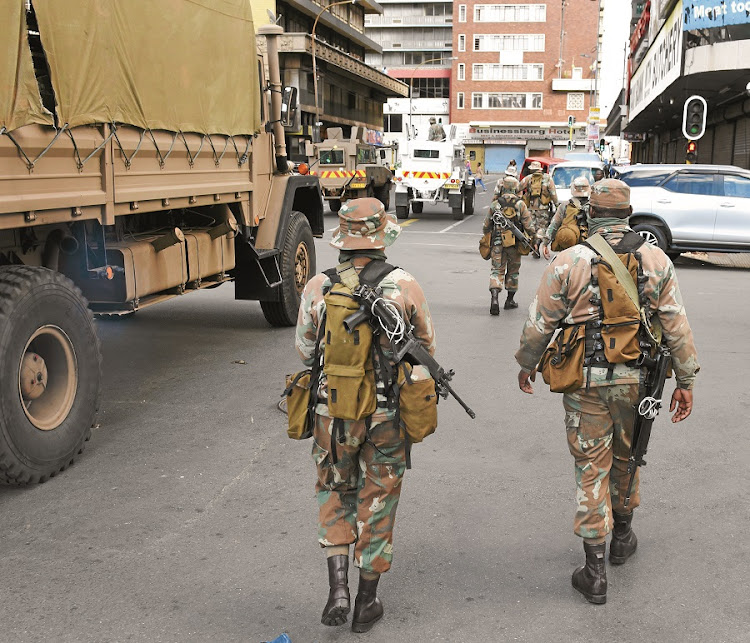 Members of the SA National Defence Force were deployed around the country during the initial hard lockdown. Picture: FREDDY MAVUNDA

It seems highly likely that for the foreseeable future SA will find itself with a serious mismatch between strategic developments and military capability. Even if the government were to wake up to the developing risks and threats, it would take a decade to reach a capability level that would allow an effective response to those that might arise — or escalate if we consider Mozambique — in our neighbourhood and region. Even then, given the economic situation it is highly unlikely that the necessary funding would be made available to the defence force.

There is, therefore, a clear need to hedge our bets. One urgent step should be to strengthen and expand defence intelligence and special forces. A combination of good, timely intelligence and focused quick response capability can head off some challenges before they become crises, and make it easier to deal with those that cannot be headed off.

That does not mean entirely neglecting the rest of the defence force, but these two areas should enjoy priority, together with the acquisition of maritime surveillance aircraft and maintenance of existing equipment. Beyond those, the defence force should consolidate its force elements to form an operationally capable core, as the basis for expansion back to realistic minimum levels when funding allows or an emerging threat demands.

Accurate and timely intelligence is essential to effective decision-making in respect of defence and, indeed, foreign relations, enabling optimal decisions. To be forewarned is to be forearmed. Defence intelligence needs to operate in four distinct but mutually supporting domains:

The great advantages of special forces include their ability to deploy quickly and unobtrusively, the wide range of integral skills, and the experience and maturity of operators, able to function effectively in uncertain, confusing and rapidly evolving situations. Linked to accurate, timely intelligence they have capability out of all proportion to their personnel strength and cost. Apart from their ability to execute autonomous missions they are also a valuable capability and force multiplier for the intelligence services and the conventional forces.

SA’s special forces have an established reputation, but are too small, arguably lack some specific capabilities and are constrained by the lack of dedicated air support. There are two existing special forces regiments, 5 SFR (airborne and land operations, similar to the British SAS and in some respects the American “Green Berets”) and 4 SFR (maritime operations, similar to the American Seals and British Special Boat Service). In addition, there are dedicated intelligence and communications elements and research & development capabilities.

Both regiments have demonstrated their capability, but there is a case to be made for restructuring to provide greater focus on particular types of operations, allowing 4 SFR and 5 SFR to focus entirely on airborne and seaborne missions. Units should be established, perhaps initially as wings within the existing units, to focus on urban and counter-terrorist operations; small team operations (long a particular skill of the SA Special Forces); long-range/endurance reconnaissance/surveillance; riverine/lake operations (quite different to seaborne operations); and special forces-specific intelligence collection.

There should also be a special forces support regiment to supply added “muscle” when required, without time-consuming and inherently risky ad hoc integration before or during a mission as it evolves. This could be 1 Parachute Battalion, integrated into the special forces community, given that the SA Air Force lacks airlift for parachute operations beyond company level, robbing that unit of its normal airborne role.

Finally, the air force should establish a dedicated special operations squadron with a mix of suitable aircraft fitted with additional specialised equipment, and a training flight to train crews of other types for when they are needed to support a special forces operation. This would ensure cohesion among all involved in special forces operations, again to avoid inherently risky ad hoc integration.

While all of this might look like a wild expansion, enhancing intelligence and special forces capabilities would be a cost-effective way of at least partly offsetting the decline in overall defence capability.