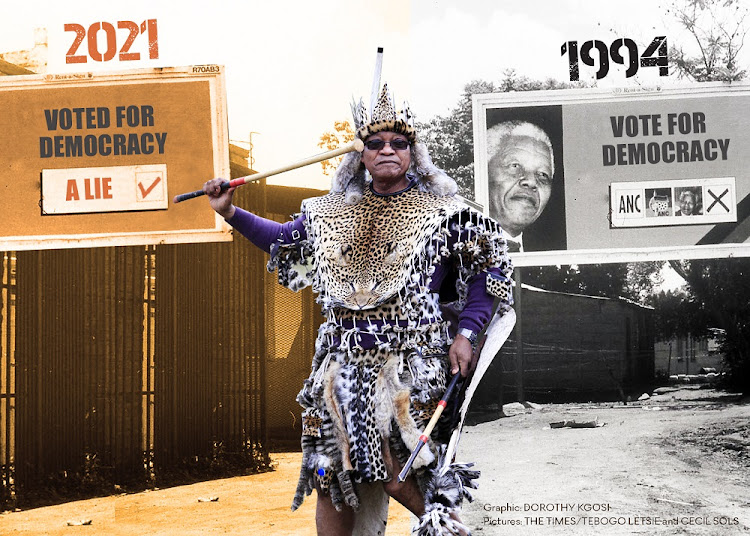 Amankengane are foreigners, a reference to white colonial settlers. And when King Shaka said “ngeke nilibuse” he was telling his brothers, his killers, that they will not rule over his kingdom because the amankengane would rule them. But he was also talking to future generations of Zulus and black people in general. He was telling us that the day would come when colonial rule — being ruled by amankengane — would be a thing of the past.

In reality our “postcolonial” and “postapartheid” period really will be the manifestation of his curse. King Shaka was telling us that the day will come when a former liberation movement will be in government but not in power, because real power will be in the hands of amankengane. The day King Shaka was talking about is now 27 years old.

Another thing King Shaka was telling us is that with the coming of that day will come the illusion of a postcolonial and postapartheid order that, in social, political, economic, cultural and other terms, will be created in the image of those who conquered what we now call SA.

The Zuma moment, a moment that was delivered through the triumph of the ANC in the 1994 elections and was visited upon us when Jacob Zuma ascended to the “throne” as president in 2009, is an integral part of the illusion of power and democracy in our post-colony. In other words, the battle to defend Zuma and attempts by his supporters to prevent the implementation of the decision of the Constitutional Court to incarcerate him for 15 months illustrate the extent to which with each passing year since 1994 neo-apartheid is being reinforced, and therefore the extent to which power continues to shift away from the interests, wishes, desires, aspirations and dreams of those on whose behalf the ANC claimed it was prosecuting the national democratic revolution.

Therefore, the Nkandla imbroglio and all the legal, political and other things that have attached themselves to it, including the many agendas that come to us disguised as a commitment to democracy, is but one more example of things through which our attention is being diverted from that which is really important — the fact that the ANC is not in charge.

Those who stand to benefit most from our narrow focus on the dramas surrounding Zuma are those who, eternally, want to benefit from the fact that our political class is a Trojan horse in which their interests are embedded. While the sabre-rattling of Zuma supporters is a threat to what we call democracy, it is not much of a threat to their interests as a dominant reality in our neo-apartheid and neocolonial order.

Does this mean the political storm around Zuma and Nkandla should be dismissed as a non-event? In my view, it would be the height of stupidity to do that. While I have argued that the country is moving towards a perfect storm of political, social and economic instability because of the injudicious choices of the Zondo state capture commission, the Constitutional Court and Zuma himself, my interest in this article is limited to the man from Nkandla.

When Zuma last appeared outside the high court in Pietermaritzburg to address his supporters, and when he spoke to them and the media at Nkandla last Sunday, I became seriously concerned. “What is happening here”, I asked myself. There are many things that were happening. Let me mention a few.

Zuma is a medium through which, since June 2005 when he was removed as deputy president of SA by then president Thabo Mbeki, people have been transmitting their political and leadership preferences, as well as their opportunism and dishonesty. Some have done this in his defence while others have done so as detractors. In debates about his position in SA politics, the middle ground between these two tendencies — uncritical joy on the part of his detractors when he is in trouble, on the one hand, and uncritical support on the other — is almost nonexistent. This he uses as a weapon to create support and destroy opposition.

When it comes to his supporters, especially those who think of themselves as the most advanced among the masses who support him, he operates on the bases of concentric circles, with all of them thinking they are either the centre or are at the centre. Some of these concentric circles are occupied by political actors who are resident in networks and political parties outside the ANC, including the IFP and EFF. Since I am of the view that for Zuma instability in the country, violent or otherwise, is an option, these concentric circles may mutate into different flashpoints, particularly in Gauteng and KwaZulu-Natal.

Since Zuma is a wily fox when it comes to political communication, he understands very well how to deploy it to alter the political environment to his advantage and to the disadvantage of his political enemies, real and imagined, including the judiciary. Symbolism at a spiritual, cultural, religious and political level is an essential component of his political repertoire.

The presence of izangoma (healers) and priests sends the message that abaphansi (the ancestors) and uMvelingqangi (God) are with him, and to be one of his supporters is to be part of an army of light in the battle against the army of darkness, which consists of his detractors, political enemies, the media and political commentators as well as the judiciary and police. When he tells us he is a member of amabutho (the regiments of the Zulu king), he is sending the message that an attack on him is an attack on him as a Zulu man, and is therefore tantamount to attacks on the Zulu nation itself.

The effect is mobilisation of support inside and outside the ANC. But he does not need huge support to impose a climate of social, political and economic instability on the country. One bullet, one death may be enough. Is this going to happen? We will find out in the days, weeks and months to come.

As I said, to focus narrowly on the Zuma drama is to divert our attention from two critical realities. First, the ANC is not in charge. I need to be persuaded that the ANC is the place where the popular will of the victims of neo-apartheid and neocolonialism resides. Second, the dominant social, political and economic reality in our postapartheid setting lies in the fact that SA still belongs to those who conquered it, 27 years after the advent of what is, by us, called democracy, but which in its liberal incarnation and as it is experienced by our people is both a lie and a fraud. King Shaka’s curse remains firmly in place.

• Matshiqi is a sangoma and independent political analyst.

BUSI MAVUSO: Section 25 change is not an essential step in addressing land reform