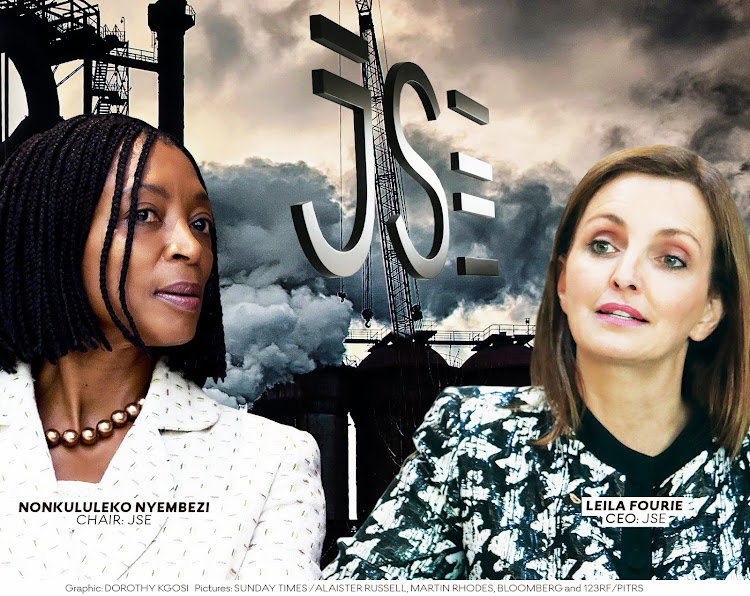 In its public reports and at public events, the JSE repeatedly trumpets its “sustainability credentials”. However, regarding action the exchange has not taken even some of the most basic steps required by the many grand global initiatives in which it plays a role.

The JSE has been a signatory to the Principles for Responsible Investment since 2009. It is a founding member of the UN Sustainable Stock Exchanges (SSE) Initiative. The JSE co-chairs, with the London Stock Exchange Group, the advisory group for two SSE Initiative publications launched on June 29: a new Action Plan to Make Markets Climate Resilient and Model Guidance on Climate Disclosure.

JSE CEO Leila Fourie is part of the UN secretary-general's Climate Action Advisory Group. She co-chairs the Global Investors for Sustainable Development Alliance (GISD) of 30 CEOs, who are “committed to drive investment and its impact to scale for the achievement of the [sustainable development goals]”.

The JSE is also part of SA’s Financial Sector Climate Risk Forum and chairs its Sustainable Finance Working Group. But despite all of this impressive-sounding involvement in world-leading initiatives related to climate change, its claims to be a trailblazer in sustainability are not matched by its actions.

In July 2020 the GISD — as part of its report on “Urgent Actions to Harmonise and Scale Sustainable Finance” — recommended mandating sustainability reporting requirements and disclosures, including the recommendations of the Task Force on Climate-related Financial Disclosures (TCFD), for financial and nonfinancial institutions.

At the JSE’s June 3 AGM Just Share asked the exchange, as we did at its 2020 AGM, when it would require its issuers to report in terms of the TCFD recommendations, and when it would publish environmental, social and governance (ESG) reporting guidance for issuers, as required by the SSE Initiative.

JSE chair Nonkululeko Nyembezi’s reply referred to the importance of a “co-ordinated response”, and to work under way by the National Treasury “to fashion a country-level response”, and by the International Financial Reporting Standards (IFRS) Foundation “to devise what could be a globally acceptable IFRS sustainability standard”.

Nyembezi said the JSE is “too small to lead on this” and “we believe that it would not be the right thing to do for us to go off ahead of all of these activities having reached a consensus position and mandate something that may turn out to not actually be the right thing, and have to turn around and change all of that again”.

Fourie said that the JSE is “guiding strongly” and playing a “strong, meaningful and leading role on the global stage in shaping climate change and TCFD or other disclosures relating to climate change”. She said that IFRS standards could be expected “imminently”.

However, the IFRS climate disclosure standards will, at the earliest, appear in the middle of next year; if they do at all — the process of standardisation is still a highly contested one. The comment period for the treasury’s draft Green Finance Taxonomy is still open, and there has been no word on any revision to its draft Technical Paper on Financing a Sustainable Economy since the comment period closed in the middle of last year.

Waiting for the government to act, or for global standardisation, seem to be simply weak excuses for failing to take action. In many public forums — and on its website — the JSE calls itself a leader in emerging markets. It states that it can “have a great impact if we use our voice and platform to influence the sustainability practices of others”.

Yet, of the 108 stock exchanges tracked by the SSE Initiative, the JSE is one of 48 that do not provide written ESG guidance. Stock exchanges in multiple emerging markets have done so, including Bangladesh, Botswana, Brazil, China, Chile, Colombia, Kazakhstan, Kuwait, India, Indonesia, Malaysia, Mexico, Nigeria, Turkey and Vietnam. Many emerging market stock exchanges are also supporters of the TCFD. The JSE is not.

It is time for the JSE to back up its claims of sustainability leadership with action at home. Financial markets require clear, comprehensive information on the risks and opportunities of climate change to inform decision-making, and the TCFD recommendations are globally accepted as the most useful mechanism for disclosure of climate change’s material financial risks.

The recommendations are more than four years old and only 17 SA entities have publicly expressed support for them, despite SA being the 12th-largest emitter of greenhouse gases and facing severe risks from global heating. Without regulation it is clear that companies will continue to delay and avoid assessing their climate-related risks and opportunities as long as possible. In the interim, our already-small window to prevent the most severe impacts of climate change continues to narrow.

The JSE should, at a minimum, publicly support the TCFD recommendations, and recommend that issuers align their reporting with them, as Just Share has been calling for at least three years.

Ideally, it should make TCFD reporting mandatory under the listings requirements. At the very least, the JSE should also align its own disclosures with the TCFD recommendations. Until it does so, its claims to be a sustainability leader will continue to ring hollow.