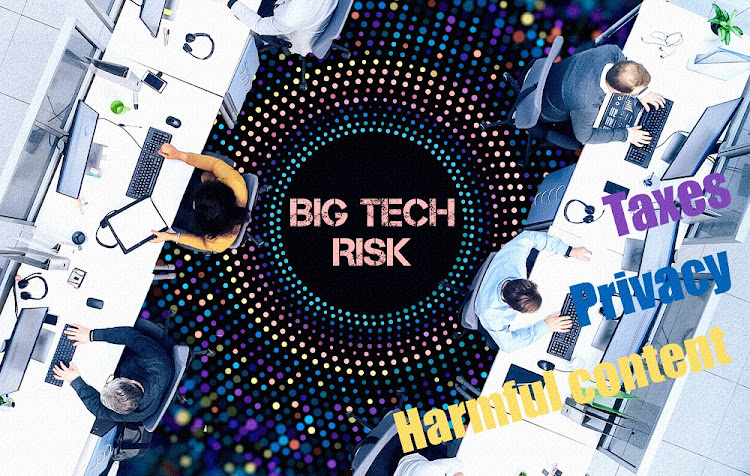 The desire to rein in Big Tech has achieved what is these days a rare level of consensus, though actual efforts to regulate the world’s digital oligarchy are rapidly diverging along ideological fault lines.

Several Western governments are heeding progressive calls by demanding these companies pay more in taxes and resolve issues around privacy and harmful content. A report by the Fair Tax Foundation released in May suggests the six leading US tech companies — Amazon, Apple, Alphabet (Google’s parent company), Facebook, Netflix and Microsoft — in effect paid a 3.6% tax rate on combined earnings of $6-trillion over the past decade. The Organisation for Economic Co-operation and Development global minimum corporate tax deal agreed to by 130 countries on July 1 includes a 15% tax floor proposed largely with these online giants in mind.

Yet whether it will materialise is uncertain — a large number of legislative hurdles lie ahead. And even if it does, the 15% rate is lower than many experts and campaigners say is necessary. Wealthy transnational companies have also shown they possess the resources and motivation to reliably find new legal means of tax avoidance anyway.

The EU’s strict digital privacy law passed in 2018 — the General Data Protection Regulation — could have a more immediate effect by placing restrictions on the sharing of users’ data with third parties. Ireland’s data protection commission is examining if Facebook can continue to send the data of its 410-million European users back to servers in the US, concerned the information is vulnerable to mishandling and US government surveillance. But threats to Europeans’ privacy are apparently closer to home. For example, the first year the regulations came into effect city officials in Portugal’s capital, Lisbon, shared the data of protesters 52 times with the local embassies of China, Israel and Russia after they were targeted by demonstrations.

At the national level, in 2019 France adopted a 3% digital services tax; Canada intends to enact its own levy beginning in January 2022. The UK government is crafting legislation to fine social media companies 10% of their annual turnover if they don’t sufficiently crack down on illegal content such as child pornography or terrorist propaganda. Australia garnered global attention in February when it passed a new law requiring Facebook and Google to pay domestic news organisations for using their content on the platforms.

Canada’s minority Liberal government is also attempting to pass a controversial new bill that aims to prioritise Canadian content on streaming services such as Netflix, YouTube and Spotify, thwart online abuses and help support domestic news outlets by making social media companies share a portion of their ad revenue, similar to Australia. Proponents of the bill say it’s necessary to promote Canadian culture, support independent media and curb rising hate speech — especially after the recent heinous murder of a Muslim family in London, Ontario, by a 20-year-old white male who ran them over with his vehicle in broad daylight. Prime Minister Justin Trudeau denounced the killings as an act of terrorism.

Conservative and libertarian actors are focused on different issues: the rise of digital monopolies and preserving freedom of expression amid an alleged tyranny of liberal political correctness. Critics of the Trudeau government, for example, argue its proposed law is dangerous over-reach, pointing out how a revised version of the bill quietly dropped an amendment that sheltered individual users’ content from government oversight.

Google, meanwhile, faces a torrent of antitrust lawsuits in the US, and on June 22 the EU launched its own open-ended probe into Google’s domination of online advertising. Brussels has hit the US tech giant with close to $10bn in fines between 2017 and 2019 for various illegal practices. A sizeable sum, but inconsequential when considering it amounts to 2.4% of Google’s website ad revenue of $407bn during the same period. And the fines haven’t even been paid while they remain under appeal.

Elsewhere, at the end of April Florida’s Republican-led state legislature passed a bill barring social media companies from unilaterally banning users the way Facebook, Twitter and others shut down Donald Trump’s accounts after his loyalists stormed the US Capitol in January. Poland’s right-wing government drafted similar legislation months ago, which would prevent users from being “deplatformed” over posts that may be contentious but don’t break any laws.

Then there are authoritarian regimes seeking to silence criticism and dissent by pulling the plug altogether. In early June the federal government in Nigeria — home to one of Africa’s burgeoning tech hubs and most digital-savvy populations — blocked access to Twitter for the country’s nearly 40-million users after the company removed a tweet from President Muhammadu Buhari seemingly promoting violence against separatist groups in Nigeria’s oil-rich southeast.

India’s government is likewise threatening Twitter with “consequences” after tweets by leading members of the governing Bharatiya Janata Party condemning opposition groups contained information Twitter labelled as “synthetic and manipulated media”. In November 2020, Vietnam’s communist government vowed to shut down Facebook if domestic political content wasn’t more heavily censored. Similar strong-arm tactics against social media companies have been used at one point or another by governments in Egypt, Iran, Myanmar, Russia, Sudan, Tanzania, Turkey and others.

Yet none of this splintered action truly strikes at the real danger arising from the attention economy, specifically via social media platforms: the entrenchment of a global information ecosystem built upon sensationalism and outrage. Business models deploying artificial intelligence-driven algorithms — programmed to maximise data-producing user engagement — perpetuate digital pathologies such as misinformation, disinformation, conspiracy theories, radicalisation and dog-whistle politics. Institutions are being undermined in the process and societies across the world are descending into hardened tribalism.

Left unaddressed, this will be accelerated by advances in deep-fake content — digital forgeries of audio and video content powered by machine learning. Deep-fake generator apps are still in their infancy, but future versions may produce false material nearly impossible to distinguish from reality. These could be weaponised in limitless ways for any number of personal or political reasons.

But one nation may have found a preliminary solution. Taiwan’s digital minister has helped foster a more constructive online public sphere in that country by creating digital tools to identify and promote content where users from different political backgrounds converge in their views and find common ground. Some observers suggest this has been an unheralded factor in the island nation’s profound success in suppressing Covid-19, by mostly mitigating the rampant partisanship and misinformation that have frustrated public health efforts nearly everywhere else in the world.

Perhaps if more governments took Taiwan’s approach — rather than using the regulation of Big Tech as cover to further their own underlying agendas — our shared reality could begin to mend. That would make it easier to then tackle other issues societies and nations are grappling with, technological and otherwise.

• Hiebert, former deputy editor of the Africa Conflict Monitor, is a researcher and analyst based in Canada.

Nigerian ban should be a warning to US lawmakers and activists, too. Their efforts to rein in US-based social media giants such as Twitter and ...
Opinion
1 year ago

Tech giants' ceasefire has ended as competition in cloud computing, web searches and AI intensifies
Companies
1 year ago
Next Article