As Mswati’s kingdom burns, SA calls for restraint by security forces and for political actors and civil society ‘to engage in meaningful dialogue’ 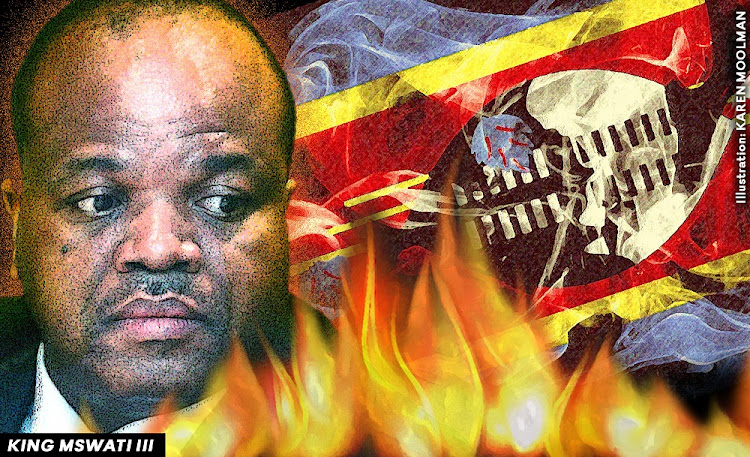 Flanking him were finance minister Neal Rijkenberg and commerce, industry & trade minister Manqoba Khumalo. They talked business and modern monarchies. Foreign journalists — the only ones allowed to attend — were told the three cabinet members were from corporate backgrounds and they wanted to attract investment to the country.

“We want the world to know eSwatini is open for business,” Khumalo said during the session, which was aimed at convincing the outside world the tiny kingdom was being misunderstood. “It is time for eSwatini to define itself,” he said. The argument was that even though it is “different” — one of only a couple of absolute monarchies left in the world — that didn’t mean it was deficient.

Many subjects of King Mswati III differ with that, and activists and workers have been calling for political and economic reforms for years. They point out how the lavish lifestyle of the king and his family contrasts with the poverty of his subjects. In March, NGO Save The Children estimated that a third of the 1-million-strong population of this mainly rural country was going hungry due to Covid-19 lockdowns, erratic rainfall and high food prices.

Even the AU electoral observer mission, usually conservative in its criticism of member countries, in its report of the 2013 eSwatini elections urged the kingdom to iron out contradictions in its constitution of 2005 so that political parties would be  allowed to participate. This hasn’t happened yet — the 2018 elections again saw mostly individual candidates competing to be part of a relatively powerless House of Assembly.

In its Covid-19 economic recovery plan released a year ago, subtitled “Carving the path to a private sector-led economy”, the government said it was “empowering the private sector to engage in high value and high impact projects that will increase the economic base by creating jobs and increasing economic activities that will grow the country’s GDP”.

The plan was to invite foreign investors to tackle big projects to create jobs and stimulate the economy. But it is unclear whether ordinary people ever bought into this. Sporadic unrest and simmering discontent have continued unabated, and some say the more serious protests of the past few days — led by vocal and angry young people — are the worst in 25 years.

The death of law student Thabani Nkomonye in police custody in May reportedly set off the first riots. The Times of Swaziland reported that the intensity increased when the government banned political gatherings and the delivery of petitions of grievances to MPs in their constituencies last week.

By Monday the country was burning, but in contrast to apparently untrue claims by opposition activists that King Mswati III had fled, fearing for his life, it is shops that were targeted, a large number of them South African.

One of the first videos to surface on Monday night showed a building next to an OK supermarket burning, and there were reports that Shoprite Checkers was targeted too, that Nedbank, Pick n Pay and Standard Bank closed their businesses as a precaution, and that FNB, Woolworths and Spar have also been affected.

On Thursday, when the mobile networks were switched on again after a 24-hour outage (SA’s MTN is one of the biggest players there), James Hall, who lives in Manzini, tweeted that small community shops were completely burnt down and that people with knobkieries and machetes were setting up roadblocks and extracting “tolls” from motorists.

Trucks have been targeted, and some were burnt by protesters. “No deliveries are currently able to cross the border,” Pick n Pay spokesperson Tamra Veley told Business Day. There was also looting at Eswatini Beverages, in which King Mswati III also has a stake. There is no bread as bakeries had been shut since Monday, The Nation editor Bheki Makhubu said via WhatsApp. He added despondently that the looting was subsiding “because there isn’t much left to loot, I suppose”.

Opposition activists are claiming that more than 20 people were killed by law enforcement officials. SA hasn’t shown much urgency to intervene, not in this week’s protests nor in the discontent that has been simmering for years. This despite the fact that the economies of the two countries are closely interlinked — 90% of eSwatini’s imports come from or via SA.

The EFF issued the first local statement on this week’s protests on Wednesday afternoon after its leader there, Nombulelo Motsa, was apparently taken in by soldiers. The eSwatini government apparently believes the EFF played a central part in organising the protests and that the party smuggled weapons into the country in the build-up to the protests.

The EFF demanded that SA “summon the ambassador of eSwatini and register the condemnation of SA of the state brutality occurring in the country”. It’s unlikely that this will happen. Soon after that, the ANC issued a statement expressing concern about the “growing instability” in eSwatini, followed by a statement from the department of international relations & co-operation in which spokesperson Clayson Monyela called on eSwatini’s security forces “to exercise total restraint and protect the lives and property of the people”.

It also called on political actors and civil society to “engage in meaningful dialogue to resolve the current political challenges facing the country”. This is probably as far as Pretoria’s public intervention will go, even though the department is supposed to have both “economic diplomacy” and an ubuntu, or human rights-based, approach to its foreign policy. The economic diplomacy objective is contained in the White Paper on SA’s foreign policy of 2011.

Subsequently, a Framework Document on SA’s National Interests was drafted which is supposed to guide its foreign policy vision, and though a cabinet statement in June said it had been finalised, efforts to obtain an actual copy have thus far been unsuccessful. Government sources say it was sent back to the department by cabinet to be improved.

Thus far SA’s strong belief in human rights hasn’t yielded much action in the southern African region in terms of its foreign policy, for a variety of different reasons, and an economic diplomacy approach has a chance of achieving some reforms in a continent that has chosen to become more business-minded.

With a clear foreign policy vision, SA’s efforts to support its businesses abroad and thus contribute to its own economic growth could even amount to more than mere words.

• Du Plessis is a freelance journalist specialising in SA politics and foreign policy.

Correction:July 2 2021
An earlier version of this story said Vodacom had operations in eSwatini, which it does not.

Industrial capacity, capabilities and competence vary across countries and regions, which can open countries to uneven trade dynamics
Opinion
1 year ago

The tangled warp and weft of the textile industry

Rebates, tariffs, markets, permits — the list of hoops required to be jumped through is long, with criminal charges as a possible coda
Opinion
1 year ago

What are the threats to our interests in the region and what firepower does the SANDF need to meet them?
Opinion
1 year ago
Next Article