Frank dialogue is needed between government, international partners and gas investors, and a starting point should be open access to facts about conditions in Cabo Delgado 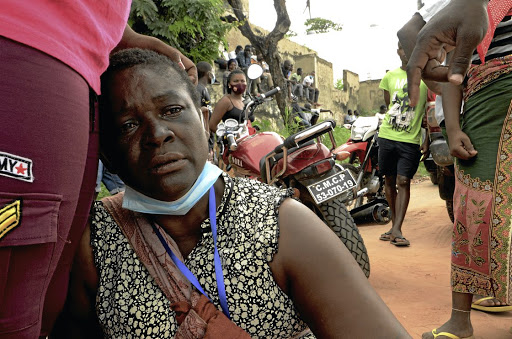 A woman is comforted after a ship carrying more than 1,000 people fleeing an attack on the town of Palma by insurgents linked to Islamic State docks in Pemba, Mozambique. File photo: REUTERS/ERNIDIO JOZINE

French multinational Total’s declaration of force majeure in northern Mozambique in the aftermath of the sacking of the gas project site and neighbouring town of Palma by Islamic insurgents, has underlined the failure of country risk strategies at the highest levels. Mozambique’s incipient energy boom is now on hold, halted by an insurgent group that was unknown four years ago.

Previously a success story for post-conflict recovery from the mid-1990s with impressive rates of economic growth, poverty reduction and democratic development, the country has lost all its gains over less than a decade. A country once lauded for peace and reconciliation now features two active insurgencies, violent intimidation of civil society and legendary corruption by state agents and the governing elite. Something had clearly gone amiss long before the insurgency.

Important inflection points fuelled Mozambique’s downward trajectory. The governing Frelimo party’s revanchist wing has been ascendant since 2004, undoing the peace-building that had been the basis for ending the civil war. Political and personal freedoms, economic governance and co-operation with Western donors have all been casualties.

Since 2016, Mozambique has been cut off from most development assistance after revelations that the government contracted sovereign loans worth $2.7bn in secret to fund shadowy companies owned by the intelligence services, which ultimately precipitated a sovereign default. The International Monetary Fund (IMF) halted its lending programme in response, followed by Western bilateral donors with decades of qualitative in-country experience.

Mozambique could easily have recovered from this catastrophe the way it once did — through engagement with international donors. But Frelimo had lost interest. Bedazzled by the prospect of unimaginable wealth from gas, it calculated it need only wait out a few short years of austerity before a $500bn energy bonanza delivered protection from any accountability indefinitely.

The aid embargo has not brought the government to the table, but has removed what was previously the main driver of transparency and accountability. The government has since let economic growth decline to near nil and debt explode from below 40% of GDP in 2010 to a forecast 120% in 2021.

When jihadists announced their presence in Cabo Delgado in October 2017 they were but a rag tag group of radicalised, excluded students. Three years of hapless governance and mindless repression turned an insurgency rooted in local grievance and rights into an Islamic State-affiliated organisation controlling the destiny of Mozambique, revealing the tragic gamble that was Frelimo’s plan. It has failed, and with or without foreign military assistance, the situation can only worsen.

To get the country away from failed state status will require that the decline of economic and political governance, and the related issue of the domestic origins of the insurgency and its escalation, be addressed. Frelimo, opting for the rewards of illiberal rule, will not be an easy partner, showing until now scant regard for either. But both party and government are running out of options.

Frelimo is consumed by infighting over spoils and factional manoeuvring to succeed President Filipe Nyusi, who is serving his final term. A party previously known for discipline and strategic choice has never been so directionless or so hostile to outside influence from long-standing allies in the regional and international community — the Southern African Development Community (Sadc) included.

Fiscal space is almost nonexistent; the government is struggling to pay salaries. Frelimo desperately wants the energy wealth. The government desperately needs it. But it cannot provide the minimum levels of security required for energy investment to continue. Economic crisis will inflict more pain, and with it greater political risks.

Self-interest should by now be making evident the need for international assistance to contain a situation its own misrule created. Local drivers and avenues for engagement still exist and must be pursued consistently. New ones will appear as the crisis worsens. A party with a five-decade long experience of adept international relations and the use of external assistance needs to return to that tradition.

Internal coalitions for reform involving moderates and technocrats as well as civil society in alliance with external donors, have been assembled by the party before, delivering the end of the civil war in 1992 and exit from the central planning failures of the 1980s. But realism is demanded of all sides. Frank dialogue is needed between government, international partners and gas investors about the true state of the country.

A starting point should be open access to facts about conditions in Cabo Delgado, which is desperately needed and can only be generated by opening the province to independent media, social researchers and humanitarian organisations. These are currently banned and harassed by the authorities.

Engagement, prompted by the extent of Mozambique’s deterioration and backed by the offer of a donor’s conference to fund recovery, will need to consider carrots and sticks — otherwise Frelimo risks opting for the path most destructive. The Group of Seven (G7) foreign ministers’ meeting in London in May indicated that new thinking may now be coming forward.

The gas majors also have a critical role to play. Eni, Exxon, Total and their partners have more than just capital sunk and revenues foregone at stake. International tolerance for energy companies is at an all-time low due to climate change. Funding illiberal governments carries enormous reputational, financial and criminal risk. They thus need to rethink the strategies that have until now be based on exclusive dialogue with the authorities.

Instead, they need to join with civil society and bilateral donors to create the conditions that can make their own investments viable and deliver Mozambique from a prolonged, worsening period of failure.

• Mason, a Mozambique analyst, is a Eunomix associate. This is the third article in a four-part series. The series has been produced by a team of expert associates from Eunomix, with deep experience in Mozambique, resource economics and fragility, supported by extensive data analysis and consultation.

The government might think it has control over SA’s energy mix, but it will get harder to keep control in coming years
Opinion
6 months ago
Next Article