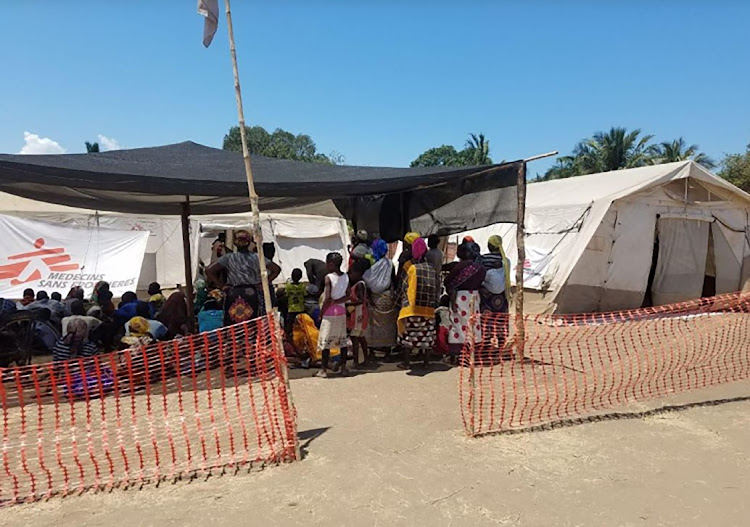 A decade ago, Mozambique was a poster child for the African Renaissance. With economic growth in double digits and a reform-minded government, the country was already a strong performer when it discovered huge gas reserves. Energy majors began huge investments that promised to multiply the country’s GDP several times over. Africa’s own Qatar stood to arise on SA's doorstep, promising a regional economic bonanza.

Instead, Mozambique snatched defeat from the jaws of victory and is now fast approaching failed-state status. Islamist insurgents control northern Cabo Delgado province, the site of gas riches that stood to benefit the domestic and regional economies while solving their energy conundrums. Most of the projects are on hold. The insurgency, now affiliated with the Islamic State, threatens to spill over. The governing elites having cornered themselves and their citizens in a position with few good options. 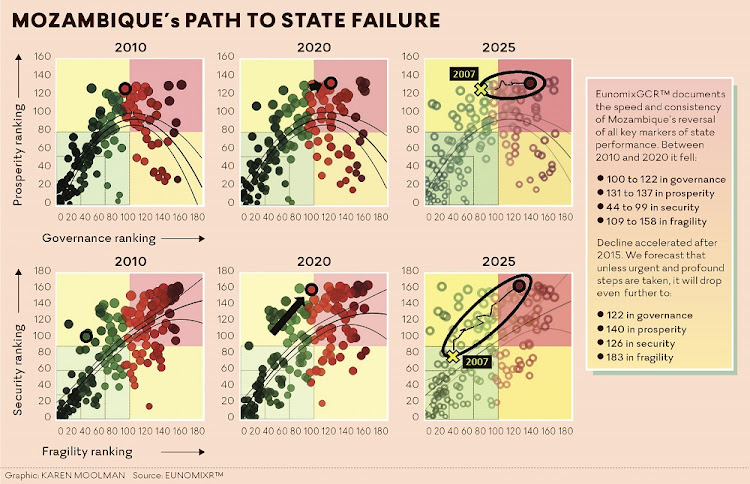 The graph above shows the scope and extent of decline measured by our global and country risk database, EunomixGCRTM. All markers of performance since 2010 are affected, but decline is especially pronounced in security and fragility. Remarkable is the country’s shift from non-fragile in the mid-2000s to fragile now. With accelerated decline since 2016 we forecast rapid deterioration, high fragility and non-democracy by 2025. This would make Mozambique’s fall one of the worst.

What started with misrule must be corrected through the end of misrule. Return to non-fragility can only originate from politics. This places Frelimo and the country’s elites front and centre of resolution. Their goal should be obvious: bring a rapid end to the downslide, and then turn to sustainable development. Mozambique has one advantage: it did it before. Those who led the peace process of the 1990s are still around, the civil service carries “institutional” memory and civil society is far stronger now than then. Donors are more willing to support a country with a record of past success than a basket case. But deep obstacles stand in the way.

First, the 1990s and 2000s enabled resolution of regional conflicts — from Namibia to SA — and rapid economic growth. Now, the great powers compete, military tensions are rising, and economic instability is pronounced. The region no longer stands unified. SA has lost confidence in its conflict resolution capacity, its own growth stunted, its focus inward. This reduces international and regional pressure.

Second, and by far most damning, is the transformation of Mozambique’s developmental elites into anti-developmental rent-seekers. This is hardly surprising: the paradox has long been observed that resource wealth can hinder national development. The government of a resource-rich country can build the accoutrements of progress while skimming off the rents of resource exploitation. The country’s per capita income goes up, but the wellbeing of most citizens does not as inequality explodes. The political elite becomes entrenched and unaccountable.

We demonstrated in a 2019 essay that “economic development almost perfectly correlates with human development for a staggering 90% of countries in the past two decades”. The 10% exception? Oil-rich countries: they “do not need their people to generate wealth, which is produced in capital-intensive enclaves [...] Absent oil, durable development depends entirely on human capital”. Governments must instead dedicate themselves to the long and arduous task of raising their people’s productivity.

Mozambique is the latest victim of this resource curse — with one, extraordinary, difference: it happened before a single dollar of gas revenues was generated. Worse still, natural resource rents decreased from 13% of GDP in 2015 to 11% in 2019. Frelimo gambled on the mere prospect of gas riches — a unique example of a “pre-resource curse”. The $500bn question is whether the security threat and revenues on hold are incentive enough for a turnaround.

Afghanistan, Libya, Mali and Syria have shown that governing elites can insulate themselves from military defeat, economic crisis and unpopularity when protected from total collapse by geopolitical rent provided by donors and foreign powers. The international community, investors and the majors may either contribute to making the crisis worse or use their considerable leverage towards sustainable resolution. To do the latter they must resist piecemeal interventions, military and economic, that play into the elite’s power calculus. There is no evidence that the Southern African Development Community intervention will avoid this pitfall.

The over-riding risk is that Frelimo, to secure funding, agrees to a budget rescue deal conditioned by a new commitment to transparency and reform, but instead directs funding towards military repression and the maintenance of power. Engagement and support must therefore, imperatively, put the political economy front and centre. The structuring goal should be to realign, through carefully calibrated, progressive and reversible incentives and sanctions, the many interests that now stand far apart. Focus should be on initiatives that build security and developmental alliances rather than solely rely on party and government. Support should be directed towards progressive, tangible steps that transversally address the causes of conflict while delivering immediate shared benefits that do not undermine the elites.

We can think of a few such steps. One would be to attach support to setting up a sovereign wealth fund capitalised with gas revenues as insurance against the Dutch disease (the increase in the economic development of a specific sector and a decline in other sectors) and towards a post-gas economy. Another would be to reduce the insurgency’s hold by delivering security, development and governance. A gas-producing special economic zone at the locus of crisis would at once unlock gas revenues and demonstrate the benefits of co-operation and accountability. Donors and majors would fund it on condition that their public investment is repaid through future gas revenues. Local success may then progressively spread. Independent, representative supervisory boards would ensure accountability. Most important, military assistance would be conditional on acceptance of these or other such steps.

It is far easier to wreck a country than build it back, even with determined political will and vast resources and support. Experience demonstrates, as we at Eunomix often observe, that there are no technical solutions to political problems. Only political solutions.

• Baissac, Mason and Rapley are associates at resilience advisory firm Eunomix. This is the final article in a four-part series. The series has been produced by a team of expert associates from Eunomix, with deep experience in Mozambique, resource economics and fragility, supported by extensive data analysis and consultation

Frank dialogue is needed between government, international partners and gas investors, and a starting point should be open access to facts about ...
Opinion
10 months ago

The government might think it has control over SA’s energy mix, but it will get harder to keep control in coming years
Opinion
10 months ago
Next Article