Given the will by the cabinet, additional Rooivalk and Oryx helicopters could be manufactured locally, as could Mokopa missiles 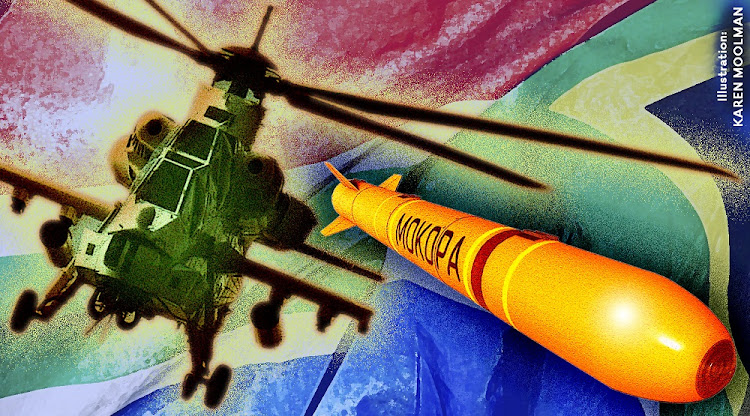 For its primary role the air force has Gripen C and D “swing-role” fighters that can conduct air-to-air and air-to-ground missions, which are well suited to the air force’s needs, with a better combat radius than the previous Cheetah C and much better suited to deployed operations from austere locations.

It is complemented by the Hawk Mk 120 as a lead-in type that also has ground attack and reconnaissance capability in its own right and can serve as a force multiplier “bomb truck” for the Gripen and the Rooivalk, striking targets they identify. Both types are nearing midlife but will remain effective for some time yet, given maintenance and upgrades.

But combat aircraft are only as good as the weapons they can deliver, and the SA Air Force lacks any beyond-visual-range air-to-air missiles and stand-off air-to-ground weapons, and has only a small number of short-range Iris-T air-to-air missiles and laser-homing bombs. Delivery of the local A-Darter air-to-air missile and development of the beyond-visual range Marlin are in doubt given the problems at Denel, and the air force lacked funds to acquire the local Umbani guided/stand-off bomb system, which is now also in doubt. In addition, it does not seem to have any antiradar weapons for air defence suppression.

The Gripen is further restricted by the lack of any in-flight refuelling aircraft, a constraint in a large theatre. Thus, for the 2013 deployment to Kinshasa on standby if needed at Bangui, they had to refuel at Ndola; a problem that delays deployment and telegraphs intentions. Air defence and air policing are hampered in turn by inadequate radar coverage of the borders, projects to acquire new radars having stalled for lack of funding and airborne radar systems being no more than a distant dream.

None of this would be difficult or particularly costly to address, be it by importing the weapons and radars or funding the completion of local weapons projects. The latter depends on Denel Dynamics surviving, which seems less likely by the day. Tanker aircraft would have to be imported, but that could be combined with a new heavy-lift transport fleet.

As a force multiplier for the army, the air force has the Rooivalk attack helicopter and Oryx tactical transport helicopter, outstanding aircraft ideally suited to the theatre, complemented by A-109 light utility helicopters that could, suitably equipped, serve as scouts for the Rooivalk.

But here too there are challenges: The Rooivalk fleet is far too small, with only 11 aircraft, and has no precision weapons, despite the Mokopa missile developed for it being produced for export. The Oryx fleet is also rather small given the range of tasks falling to it. Both also date from the 1990s and so should undergo a midlife upgrade. Another gap is the lack of heavy lift helicopters.

As with the fighter force, none of this would be insurmountable given the will at cabinet level: additional Rooivalk and Oryx, preferably upgraded Mk 2s, could be manufactured locally and, assuming Denel Dynamics survives, so could Mokopa missiles, while a new sight sourced from Hensoldt Optronics would enable the Rooivalk to also use the beam-riding Ingwe missile.

As an enabler for the army the air force is woefully underequipped, with just seven 1960s vintage C-130 Hercules that also lack the payload/range performance to be effective in crisis response operations along the Southern African Development Community periphery and cannot transport medium combat vehicles, required to counter the heavily-armed “technicals” used by many guerrilla groups.

The intended acquisition of A400M transports that would have provided regional airlift was cancelled on the basis of deficient advice from senior officials. Those aircraft could also have provided the in-flight refuelling capability. As an enabler for special forces the air force is similarly limited, lacking suitable aircraft, though its light aircraft — Casa 212 and Cessna Caravan —  have some utility in this role.

As a force multiplier for the navy, the air force is scandalously ill-equipped, with just three 1940s vintage C-47TP Dakotas to monitor SA’s 1.5-million square kilometre exclusive economic zone along the 2,798km coastline and the 1,600km long Mozambique Channel, which carries much export trade and imported oil. Those aircraft were fitted with new engines in the 1980s but lack search radar and optronic sensors, and lack the range to cover the Marion Island waters 1,750km to the southeast, or to meet SA’s search and rescue commitments.

For direct support to the navy there are only four Super Lynx helicopters for the four frigates, when they should really embark two each for serious operations. The Super Lynx also lack any precision weapons for them, despite the Mokopa being integrated with the similar Super Lynx of the Algerian Navy, nor do they have sonar or antisubmarine torpedoes.

This creates difficulties because maritime aircraft and helicopters would have to be imported, though the air force could lease coastal surveillance aircraft to at least monitor the exclusive economic zone and Mozambique Channel. They could be complemented later with a few maritime C-130 Hercules that would have the range/endurance to cover the island waters and the Southern African Search and Rescue Region. Maritime patrol aircraft could be acquired later.

The immediate and near-term requirements are primarily weapons for the Gripen, Hawk, Rooivalk and Super Lynx, a Rooivalk upgrade, coastal surveillance aircraft and, ideally, additional Super Lynx. Apart from the latter two, this could mainly be handled locally.

The other immediate need is to increase the funding for flying hours and maintenance: the best aircraft and weapons are only as good as the crews that fly them and the maintenance put into keeping them operational.

• Heitman is an independent security and defence analyst. This is the final article in a series on the capability of the SA National Defence Force’s three combat services.

Government has neglected the army, which is now understrength and handicapped by obsolescent equipmentt
Opinion
1 year ago