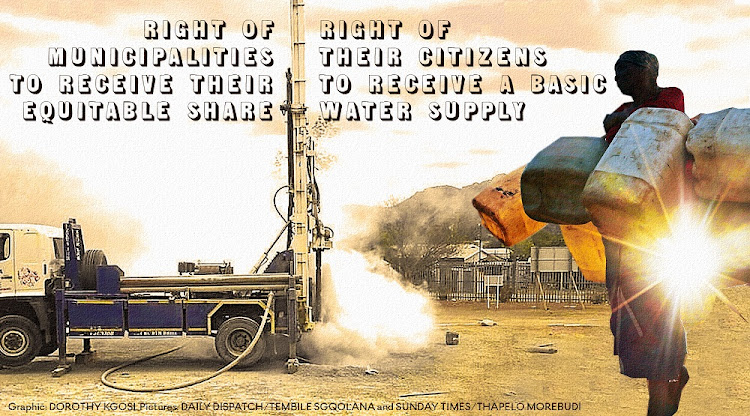 Twenty-five years ago proposals to allow communities to provide their own water were blocked because the priority was to establish municipalities that would be responsible for service provision.

It has now been established that many municipalities have failed. Dry taps and the stench of sewage flowing down the streets are forcing South Africans to look for alternatives, which challenges some of the “sunset clauses” in our constitution.

Here I am not referring to the clauses that protected property rights and guaranteed the jobs and pensions of the officials of the outgoing regime. These are the constitutional provisions that give an extraordinary degree of autonomy to our municipalities.

That autonomy has allowed municipalities to fail, while in plain sight local politicians use money intended to provide basic services for patronage appointments or worse. But now, both bulk service providers and communities themselves are taking action — and winning support from the courts.

This may see an unused section of the 1997 Water Services Act come into play. Section 51 allows communities in smaller towns and rural areas to establish local water committees to take responsibility for their own water supply and sanitation services.

Its application has been blocked by a clause that requires municipalities themselves to approve such alternative supply arrangements. However, as courts appear increasingly willing to overrule municipal autonomy, that may change. But for local water committees to provide a viable alternative, some difficult challenges remain to be addressed.

The cost of municipal failure to maintain safe and reliable services is well known. In Makanda, Eastern Cape, the municipality’s inability to provide safe and reliable water has hammered Grahamstown’s education and culture economy. In Lichtenburg in the North West, the closure of Clover’s cheese factory due to multiple service failures has cost the town hundreds of jobs. In Gauteng, Emfuleni’s sewage disaster has sunk the area’s efforts to promote tourism-based activities on the Vaal river.

National and provincial government have often proven unable to intervene effectively. They have been hamstrung by the protections provided to local government by the constitution. The administrative requirements for intervention are onerous. And there are political costs, since local government leaders provide a political power base on which many provincial and national politicians depend.

Now it seems the issue may be taken out of the hands of the politicians as well. The precedent was set when, earlier this month, the high court in Pretoria ordered the Maluti a Phofung municipality to hand over its electricity distribution and revenue collection functions to Eskom for a period of five years. The will enable Eskom to recoup some of the R5bn in debt owed to it by this Free State municipality.

While Eskom’s financial crisis has received national attention, municipal debt to bulk water suppliers — principally the water boards — actually exceeds that of municipal debt to Eskom. But unlike Eskom, water boards do not have established retail operations that can, if allowed, take over the distribution business of local municipalities.

Some communities have tried to fix their water problems by taking direct control of their services. For example, residents of the small town of Koster in the Kgetlengrivier Municipality took over the new R100m sewage plant, which stopped working shortly after it was completed because the municipality provided neither funding nor qualified staff to operate it.

So community management is back on the table, not just in Koster but in other municipalities across the country. Communities in municipalities such as Lekwa/Standerton (where the largest poultry processing plant in the country faced closure because of water supply problems) have sought to repair broken equipment. Similar efforts have been made in many other towns and rural settlements.

Where there is no institution that can easily step in to fill the gap, section 51 of the 1997 Water Services Act might offer an option. It allows the minister responsible for water to establish a water services committee “to provide water services to consumers within its service area”.

But besides the municipalities’ legal monopoly on service provision, money will also be a problem. In Maluti a Phofung, Eskom can tap the large, relatively creditworthy business customers that underpin a significant proportion of the municipal electricity business. But most municipal water supply goes to poor households that struggle to pay for water used over and above their free basic allocations. And funds for those free allocations are paid by the Treasury to municipalities as part of their “equitable share” grants, even though it is often used for other purposes.

It will be difficult for community organisations to access the water and sanitation component of that equitable share since it is directed to municipalities by the constitution. Even though it is explicitly intended to enable them to perform their constitutional duty of providing basic services, attempts to divert it to other organisations would be vigorously opposed.

This is the consequence of one of the constitution’s lesser known “sunset clauses”. A generation ago, in 1993, National Party constitutional negotiators wanted to establish strong regional governments, which they hoped would become future spheres of influence. They also had to be seen to protect the property, jobs and pensions of their white constituencies. “Sunset clauses” in the 1993 interim constitution provided those protections.

But both ANC and National Party negotiators had to find a way to keep smaller, more extreme, parties in the fold long enough to make the transition from apartheid to democracy. As legal academic Hugh Corder wrote, “it was at the local level that a great degree of resistance by right-wing whites was being experienced, particularly in the rural areas”.

To meet their demands, a transitional model was adopted that gave “minorities” extra representation in new local government bodies. And the principles that guided the final 1996 constitution in effect guaranteed continued local government autonomy, though the minority white privilege of the transitional arrangements was ended.

So it is ironic that the groups that were among the strongest advocates of local government autonomy are now among the loudest voices calling for national government intervention where municipal service provision has collapsed.

In 1997, the challenge was to establish municipalities, not to provide alternatives to them. So, before establishing a local water committee the minister of water is still required by the Water Services Act to get the agreement of the municipality concerned, as well as the provincial and national officials responsible for local government. However, given recent precedents it would be a small step for a court to rule that a community could establish its own water committee.

The legislation empowers the minister of water to set the supply area for such committees and requires them to supply all people in that area to established norms and standards. So poor communities could not be excluded, an obvious concern. However, for such committees to be viable they would have to get access to equitable share funding. Although that is intended to enable basic services to be provided, it will be difficult.

The challenge for the courts will be to balance the right of municipalities to receive their equitable share against the right of their citizens to receive a basic water supply. The courts’ approach could help reset the balance between citizens and the local governments that are meant to serve them.

• Muller is a visiting adjunct professor at the Wits School of Governance. As director-general of water affairs he helped draft the 1997 Water Services Act. He writes in his personal capacity.

Manufacturers and mines are being hard-hit by unstable water and power supplies, social discontent and badly maintained roads
Companies
11 months ago

Root out corruption and factionalism from the ANC, says Ramaphosa