SA in a diplomatic quagmire over impeached mayor, blessed water and invading Angola 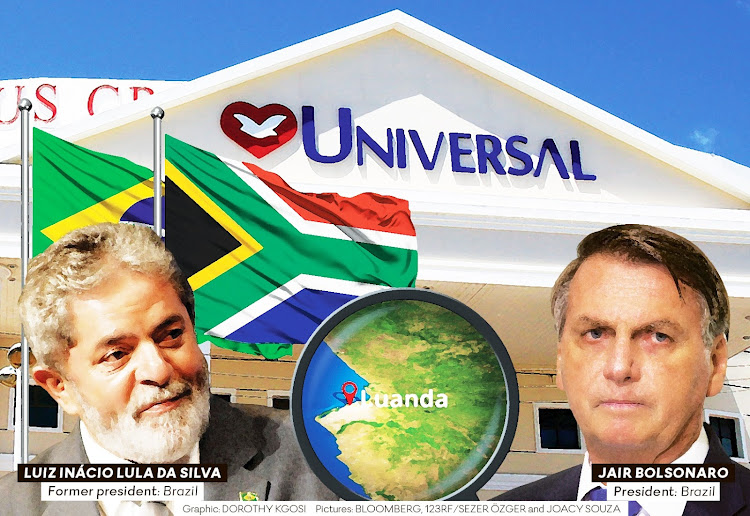 Usually the comings and goings of foreign ambassadors to SA hardly make the news, let alone headlines. However the nomination by the Brazilian government of a new ambassador to Pretoria has caused an uproar in Brazil.

This is not only because the current ambassador, Sergio Danese, a highly experienced and respected career diplomat who only arrived here in December, has already made great strides in bringing Brazil and SA closer again and is not due to be replaced for about three years. It is also because the new nominee, disgraced former Rio de Janeiro mayor Marcello Crivella, is mired in controversy and awaiting trial on myriad corruption charges stemming from his truncated mayoral term. He was impeached and arrested in December 2020.

The question is why the Bolsonaro government wants to send an awaiting-trial suspected criminal to one of its most high-profile and strategic embassies. The answer is complex, and starts in Angola.

Crivella is a bishop of Brazil’s Universal Church of the Kingdom of God and a nephew of Edir Macedo, the billionaire founder of the church, which has a strong presence in Africa, especially in fellow former Portuguese colonies Angola and Mozambique. It also has several properties in SA, though the church’s presence here is more low-key than elsewhere.

While the Universal Church claims to do a lot of charitable work, its presence in Africa is controversial. I have heard complaints from people as diverse as a taxi driver in Maputo to airline pilots in Luanda about the church preying on the poor and vulnerable in those countries. Charges range from claiming a congregant’s whole first salary as compensation for prayers to get a job, to selling “blessed” water — ostensibly from the River Jordan — that can cure all known illnesses. Failing to tithe regularly results in threats of blacklisting by local credit bureaus. Collection plates often carry a credit card machine to make it easier to comply with the flock’s financial obligations to the church.

The Universal Church has been a huge financial success. That the upper echelons of the church fly in private jets while the faithful remain poor, despite continued tithing, has understandably raised questions about the sincerity of the church’s intentions. In Angola, where substantial revenue is sourced, a distinct unease has arisen over its presence in the country. After an investigation into its affairs Angola in effect nationalised the Universal Church’s buildings, and in April expelled 50 of its pastors for tax evasion, racketeering and breach of visa conditions.

Brazilian president Jair Bolsonaro enjoys substantial support among evangelical voters in Brazil. The Universal Church is the largest and most visible group among those, and thus a constituency Bolsonaro cannot afford to alienate. It has been reported in Brazil that the Universal Church actively pressured him to intervene in the expulsion of the pastors from Angola.

Brazilian media giant Globo reported that when confronted by a senator about what he intended to do about the Angola crisis, Bolsonaro replied: “What do you want me to do? Invade Angola?” Since the expulsions were a sovereign act by Angola there was little he could do, but a threat of war — even in jest — can hardly be considered diplomatic.

Enter Crivella who, despite the criminal charges against him, remains a highly respected figure in the Universal Church. His nomination as ambassador to SA has been widely interpreted by the Brazilian press as a way for Bolsonaro to appease the church. By placing such a senior member in SA, the reasoning goes, Crivella would be in a position to smooth things over with the Angolan government while persuading Bolsonaro’s faithful evangelical voters that he has not abandoned them.

This is crucial for Bolsonaro with next year’s presidential elections looming, since former president Luiz Inácio Lula da Silva looks to be a formidable challenger. Lula has recently been cleared of all corruption charges after the Brazilian Supreme Court found that his convictions were baseless and that the judge presiding over his case had been biased, having actively worked with prosecutors to secure his conviction.

Crivella has previously worked in SA as a missionary, and wrote a book on how to evangelise Africans called Mutis, Sangomas and Nyangas: Tradition or Witchcraft? In his book he criticised African religions as backward and demonic, writing: “In misery and poverty [in Africa] we see the hatred of the devil and his demons that work unashamedly by means of all these sects and religions.” He later tried to justify this position as being the result of his time living in Africa in an environment of “war, superstition and witchcraft”.

He has also called homosexuality a “terrible evil”, labelled Catholics “demonic”, and said Hindus drink children’s blood. He has tried to distance himself from those statements by saying they were the work of his immature younger self.

Crivella’s appointment as ambassador to SA depends upon the approval (called agrément in diplomatic parlance) of the department of international relations & co-operation. Traditionally, SA does not take a position about other countries’ choice of ambassador, and with a crucial ally such as Brazil it is difficult to see a situation in which it will decline the agrément. But SA is in the unenviable position that if it approves Crivella it risks souring relations with Angola.

The outcome of next year’s election in Brazil is up in the air, and if there is a change of leadership in Brazil Crivella’s appointment as ambassador here will prove awkward. Influential Brazilian newspaper A Folha de São Paulo has reported that Lula had visited the new SA ambassador to Brazil and had an hour-and-a-half meeting with him. It was apparently only a courtesy call, and no further details have been released. But it does indicate that SA wants to remain friendly with the former president, who made huge strides in cementing relations between Africa and Brazil when he was in office. This benefited businesses on both sides of the Atlantic and resulted in several of Brazil’s biggest companies setting up African headquarters in Johannesburg.

All of that aside, SA does not need a suspect in a criminal case with such an outspoken racist and homophobic background here, especially when the motivation is political rather than diplomatic, with suspicions that the goal is to promote the Universal Church rather than relations between SA and Brazil.

• Myburgh is an attorney and member of the Brazilian Law Society.