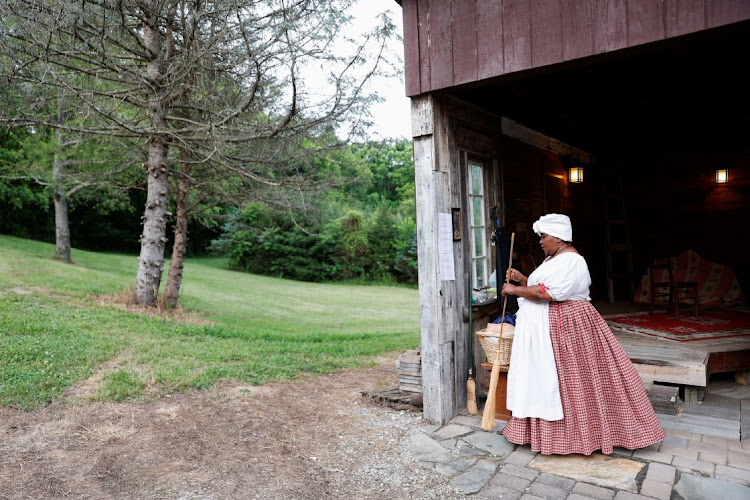 To commemorate Juneteenth, Ubunibi-Afia Short portrays Nancy, who in 1820 was enslaved to Elihu Embree, the editor of "The Emancipator" an abolitionist newspaper, on the grounds of the Embree House Historic Farm, said to be part of the Underground Railroad, in Telford, Tennessee, US,on June 19 2021. Picture: REUTERS/CHRISTOPHER ALUKA BERRY

The announcement in Texas that all slaves were freed, made on June 19 1865, came more than two years after the Emancipation Proclamation took effect, and more than two months after Abraham Lincoln was assassinated.

But it has become a unifying symbol of the final fulfilment of freedom for America’s officially enslaved population. It certainly wasn’t the end to racist violence, discrimination or a seemingly never-ending list of shameful disadvantages thrown at black people. That day still lies in the future.

However, it stands for hope, and for another step forward in the nation’s relentless effort to live up to its own ideals. The Texas slaves were the last to be freed as Union armies moved through the Confederacy.

Last week the US Senate unanimously passed a measure that would make June 19 — “Juneteenth” — a national holiday. We are aware of the arguments that such a holiday would cost millions as workers take the day off.

However, the holiday — already observed in many states — would be an important step towards healing a nation’s wounds. It would simultaneously acknowledge the pain and mistreatments of the past, while directing Americans’ gaze towards a better future. That is worth the cost.

Why June 19, and not January 1, the day in 1863 when Lincoln’s Emancipation Proclamation took effect? The difference lies in the details and the practical effects.

The Emancipation Proclamation applied to confederate states, not to loyal border states that still practised slavery. In the South, it had no practical meaning at all, as rebellious states didn’t consider themselves bound by anything coming from Washington.

Its greatest effect was to allow black soldiers to fight for the Union, which eventually led to a force of about 180,000 men, according to the Library of Congress.

But even after the end of the war, the Union states of Kentucky and Delaware continued to allow slavery until the ratification of the 13th Amendment on December 6 1865, nearly six months after Juneteenth. /Salt Lake City,  June 16

The French president was visiting the Gisozi genocide memorial, where more than 250,000 victims are buried
World
1 year ago
Next Article