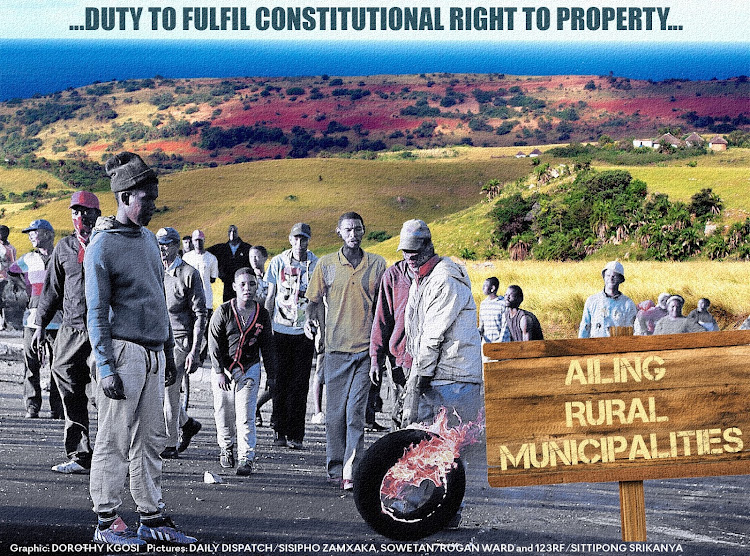 The ad hoc committee tasked with amending section 25 of the constitution was due to submit its report to the National Assembly on May 31, but obtained an extension until the end of August. The reason? Political parties on the committee asked for more time to deliberate on what the amendment bill should look like.

The bill that was published for public comment stuck to the committee’s original mandate, namely to make explicit that just and equitable compensation for expropriation can be nil. However, there have now been calls for an amendment that would place all land under the custodianship of the state — hence the need for further deliberations. This is problematic, and we illustrate here why.

The concept of state custodianship comes from the “doctrine of public trust” contained in US law. It is rooted in the logic that natural resources such as navigable rivers and other areas of exceptional natural beauty and value are so central to the wellbeing of all people that they should not be privately owned. Such natural wonders belong to the people at large, it holds, and the state is required to manage them in trust for the good of all. However, the US public trust doctrine is largely confined to environmental law and was never meant to mean nationalisation of land. After all, the doctrine comes from the same country that is seen as the global champion of capitalist thinking.

The concept of a “trustee” or “custodian” is critical because it does not mean the trustee/custodian is entitled to use the property for its own benefit. Our courts recognised this as far back as 1921 when they stated: “Where one man stands to another in a position of confidence involving a duty to protect the interests of that other, he is not allowed to make a secret profit at the other’s expense or place himself in a position — where his interests conflict with his duty.” The state is not the “owner” in the classical sense, but instead has a duty of care to ensure it is protected for the benefit of the population at large.

To some extent it can be argued that this form of custodianship is closer to the manner in which traditional councils allocate land under customary law. The land does not “belong” to the traditional council but to the people, and the traditional council has a duty of care to protect the interests of the occupiers who use the land. This traditional form of tenure was, to a large extent, corrupted and misused by the colonial and apartheid authorities. With that in mind, there is a temptation to make this connection between customary land governance and the concepts of “custodianship” or “public trust” as a vehicle to restore traditional land governance, but there are a number of challenges with this approach.

First, property rights cannot be read in isolation from the rest of the Bill of Rights. Our constitution does recognise customary property rights, and they should receive the same legal recognition as common-law property rights. However, both systems must be administered in a manner that is consistent with the constitution. This means systems of administration may not be arbitrary, must be transparent and must be accountable. Unfortunately, SA does not have a great track record in this regard.

Indeed, on June 11 the high court in Pietermaritzburg set aside the controversial “PTO Conversion Project” implemented by the Ingonyama Trust. According to the project, the trust stopped issuing permissions to occupy (PTOs) in 2007 and started systematically replacing all PTOs with lease agreements. The effect was that occupiers now had to pay rent to the trust, failing which they would lose their land rights and could face eviction.

However, according to the Ingonyama Trust Act the land must be administered for the benefit of the communities and residents residing on it. In a damning judgment, the court held that the leasehold scheme violated this relationship as “the trust has effectively become a landlord rather than a trustee”. The court held that the trust acted unconstitutionally as the programme erased legally recognised land rights in a manner that was arbitrary and inconsistent with the constitution.

This example highlights the dangers inherent in a system of state custodianship where one relies on the state to act in your best interests. State custodianship would also place an impossible burden on the state. As mentioned earlier, property rights should not be seen in isolation. The constitution provides for the right to administrative action that is lawful, reasonable and procedurally fair. Even traditional, customary forms of land governance have to be transparent, accountable and procedurally fair to pass constitutional muster.

To use the same example, on Friday the court not only ruled against the Ingonyama Trust board but held that the agriculture, land reform & rural development minister “breached her duty to respect, protect, promote and fulfil the constitutional right to property of the holders of [Interim Protection of Informal Land Rights Act] rights vested in respect of the trust-held land”. In other words, the court found that the minister failed to exercise adequate oversight over the conduct of the board. If this seems like an unfair burden on the shoulders of the minister, imagine the burden if all land fell under the custodianship of the state. This is simply an impossible burden and no government would ever be able to meet this requirement.

An effective land tenure system should also allow the government to levy funds or raise taxes for projects that benefit the public at large. Ironically, one of the arguments raised by the Ingonyama Trust was precisely that it needed to raise funds for the management of the trust, which is not possible under the PTO system. The court rightly held that the act does not allow the trust to do so, and that there was no evidence that the rent was used on projects that would benefit the community.

This does, however, raise an interesting question: how would municipalities raise revenue if all land was held by the state? The ailing state of rural municipalities has featured strongly in the media of late, and a situation whereby they could not tax landowners would only serve to weaken these institutions further.

Finally, in a time when SA is desperately seeking international investment to boost its economic recovery, is it really practical to implement a system of land tenure that is only accessible to those who live by that custom? We live in a globalised world where economies are interlinked. It is for this reason that several developing countries similar to SA are adapting their tenure systems to make them predictable and understandable to international investors.

We can only hope the ad hoc committee critically considers these points before a final recommendation is made at the end of August.

• Boshoff is head of legal intelligence research and Sihlobo chief economist at the Agricultural Business Chamber of SA. Kirsten is professor of agricultural economics at Stellenbosch University.