Consultation is vital before the policy on sin taxes is changed

​In February, the Treasury announced an 8% increase in alcohol and tobacco excise duties. This excise increase appeared to be driven by a desire to grow government revenue, after a year in which the economy — and government coffers — had taken a battering from the Covid-19 crisis.

At the same time, the Treasury announced plans to amend its excise policy on cigarettes and alcohol. In particular, the Treasury noted it was considering levying higher excise duties on cigarettes and alcohol in future. In his budget statement, the finance minister Tito Mboweni said the government would review so-called “sin taxes” as part of the country’s public health agenda, to reduce consumption through higher retail prices.

Current excise policy limits the excise to 40% of the retail price of the most popular price category of cigarettes. The targeted excise incidence for spirits is 36%, for beer it is 23% and for wine it is 11%.

During the past couple of years, the Treasury has been setting excise outside the prescribed boundaries of its own excise policy. For example, before the February budget, cigarette excise was at 43.5% of the retail price, which is apparently ultra vires to the government’s own excise policy. The 8% excise increase took the incidence on the most popular category of cigarettes to 45%.

The responsibility of advising on tax policy and designing new tax legislation rests on the minister of finance, working closely with the Treasury. But there needs to be a proper consultation process where the voice of businesses and their customers are invited to be heard.

The constitution is premised on the principle that SA is a representative and participatory democracy and provides for public access to, and involvement in, the legislative process.  The Constitutional Court and Supreme Court of Appeal both say that policymakers have a constitutional obligation to facilitate public participation in the taxation law and policymaking process.

Further, SA — together with Benin, Liberia, Nigeria and Senegal — recently accepted an invitation to be part of a pilot project sponsored by the International Budget Partnership and the Global Initiative for Fiscal Transparency to help build the technical capacity for governments to implement effective mechanisms for public participation in fiscal policies, while providing an open dialogue between civil society and public finance authorities on the use of public resources.

Consultation with alcohol and tobacco manufacturers at an early stage of the pending excise tax policy review is imperative. But, as things stand, no announcements have been made about how the consultation process will run, what it will entail and how long it will take.

Given the country’s constitutional obligations and its aim to build a better fiscal policy technical capacity, it is important that the Treasury lays out clear and transparent plans for consultation on the excise policy as soon as possible, so that all interested parties can make a proper contribution.

This is especially important given recent developments in the legal alcohol and tobacco industries. The alcohol and tobacco industries were both severely affected by government policy during the pandemic.  During the 2020 national lockdown, the government imposed an unprecedented total trading ban on alcohol from the end of March to the beginning of June, with further restrictions in place for the rest of 2020. Cigarette sales were banned between March and August. This resulted in a drastic drop in legal sales of these products, a corresponding fall in tax revenues, and a rapid rise in the consumption of tax-evading, illicit alternatives.

According to the University of Cape Town, the illicit cigarette market grew 104% during the lockdown period. And a recent Ipsos study shows that more than 60% of the cigarettes consumed in SA are now illicit, up by 33% compared with before the sales ban. Consequently, in the 2020/2021 financial year, excise duties from legal cigarettes were a staggering 60% lower than the R14.46bn the Treasury expected to collect.

The alcohol industry also reported large losses. The SA Liquor Brand Owners Association says the sales bans cost the legal alcohol industry R36bn in lost revenues and the Treasury R29bn in lost tax receipts. It estimates that 15% of the alcohol market has continued to operate illegally, without paying any taxes.

There are signs that the supply chain for illicit products has gained substantial ground, with more sophisticated distribution models having been formed during the sales bans. Even after sales restrictions were lifted, the consumption of tax-evading alcohol and tobacco products was higher than they were before Covid.

The alcohol and tobacco industries argue that the supply of illicit alcohol and cigarette should be curtailed before any changes are made to the policy on excise duty rates.  This will include addressing the failures of enforcement and curtailing illicit sales. Only then, they say, should large tax rate increases be looked at. All this should be considered in the tobacco products and alcohol excise policy consultation.

We should not forget the contributions made to the history of this country by these industries, from job creation through to fiscal contributions and innovation. Let us not give multinational companies a reason to exit a country where illegal business practices are becoming the norm.

• Subban is partner and head of indirect tax at Baker McKenzie Johannesburg.

The industry now wants the government, and even health groups, to conduct their own research, too
National
1 month ago

Those South Africans who do drink, do so to excess, as measured against international standards. Would tax increases solve the problem?
Features
4 months ago 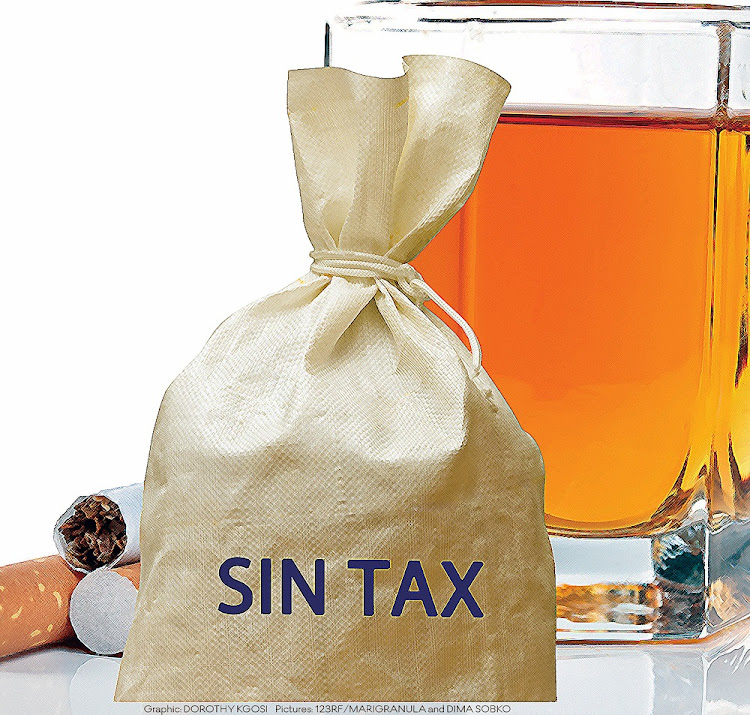