Had new premier stayed in business, some say, he would have been one the richest Israelis 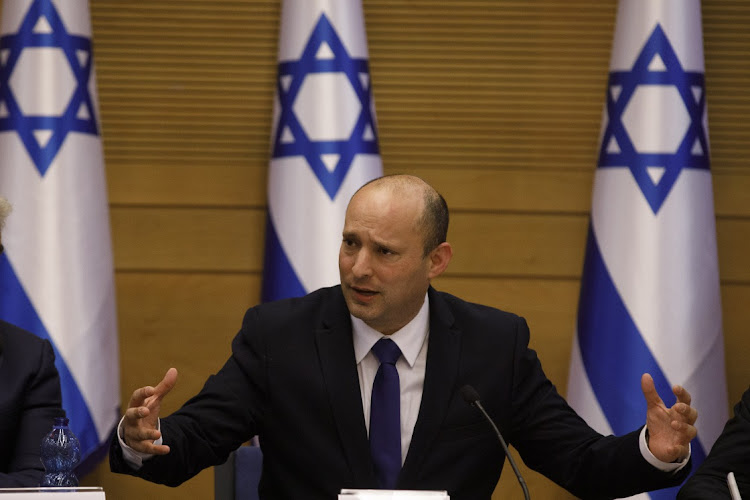 Naftali Bennett, Israeli's new prime minister and leader of the Yamina party, speaks during a meeting of the new government at the Knesset in Jerusalem, Israel, on June 13. Picture: BLOOMBERG/KOBI WOLF

Most Israeli premiers arrive from the public sector or the military. Naftali Bennett is the first to enter politics from the world of tech. Fresh out of the army in 1999, he cofounded antifraud company Cyota, which was bought out by security company RSA in 2005 for $145m. Eight years later, as an investor and CEO of Soluto, he led another exit; this one valued at $100m.

Those may sound like small numbers now, but that was before Israel was dubbed the “start-up nation”. Had he stayed in business, some in Israel’s tech sector now say he would be one the richest Israelis.

He was still celebrating his new victory when news came that Payoneer, an Israeli company in which Bennett was an early investor, is merging with a US special purpose acquisition company (Spac) and will be listed on Nasdaq with a $3.2bn valuation. Forbes Israel estimates that Bennett’s share will reap $5m. Local insiders say it could be much higher.

Clearly, he will not enjoy the almost unfettered power of his former boss and bitter rival, Benjamin Netanyahu. Bennett will be leading a government in which his Yemina Party is only the fifth-largest coalition faction.

His coalition, composed of eight parties across the ideological spectrum, will be incapable of big-ticket foreign policy initiatives. Bennett’s foreign policy aims will focus, as all Israeli prime ministers do, on Israel’s relationship with the US. Here he has some advantages. He speaks American (he relinquished his US citizenship in 2013, when he was elected to the Knesset). He is boyishly charming when he wants to be, unpretentious and pragmatic when necessary.

Bennett will deploy these skills to make friends in the anti-Netanyahu mainstream of the Democratic Party, even as he works to improve and expand the nuclear deal the US is negotiating with Iran (stronger inspection, limits on ballistic missiles and restrictions on Iran’s support for terrorist groups); and to nudge the administration’s two-state diplomacy in the direction of the peace plan introduced by the Trump administration.

He will maintain ties with the Republican Party and evangelical Zionists while charming liberal Jewish leaders with his orthodox-lite tolerance, symbolised by a skull cap the size of a bottle cap. Beyond that, his main goal will be to stay on good terms with US without getting sucked into its battles with China and Russia.

Bennett’s campaign was focused on avoiding a fifth election, so how he will prioritise policy areas is an open question. At home, Bennett’s success will depend largely on his ability to calm the rancorous political atmosphere brought by Netanyahu, keep his disparate fellow ministers on board, deliver post-Covid-19 prosperity and push reforms of the legal system, social welfare and digital infrastructure (oddly enough, the “start-up nation” has one of the world’s slowest internet speeds).

Bennett proclaims himself a believer in Israel’s right to sovereignty in all of Jerusalem as well as the whole West Bank, which the Israeli government refers to by its Biblical name, Judea and Samaria. But given his broad government and his narrow slice, it is a moot point.

Bennett may have a Biblical vision, but he has the foresight of a tech investor. As minister of education in a previous Netanyahu government, he substantially increased the number of high school students majoring in math and physics.

He is also a firm believer in the power of the marketplace. In a 2013 interview, he cited as a model the response of President George W Bush to the 9/11 terrorist attacks on New York and Washington. “He told the public to go out and shop,” Bennett recalled. “Very patriotic.”

Of course, Bush also declared war on Iraq and Afghanistan. Bennett, who served as an officer in an elite combat unit, is no dove. If Israel is attacked again by Hamas, he will respond harshly. National security is the one issue for which he will have the broad support of his coalition as well as the Likud opposition.

Short of war, he will have a hard time getting much done in the two years of his term, or even keeping the coalition together that long.

“Bennett is smart and determined,” says Roy Katz, host of the daily Free Market radio show, “but he will have comparatively little power. What he does have is the opportunity to change the national vibe. And that’s something Israel badly needs right now.”

• Zev Chafets is a journalist and author of 14 books. He was a senior aide to Israeli Prime Minister Menachem Begin and the founding managing editor of the Jerusalem Report Magazine.