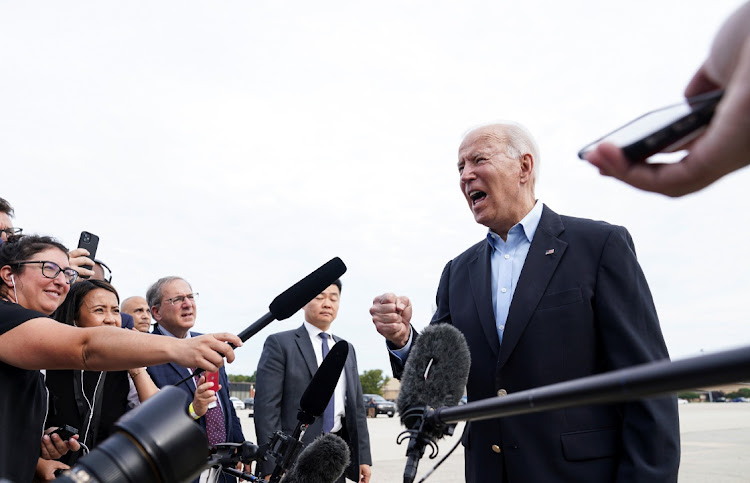 US President Joe Biden talks to reporters prior to boarding Air Force One as he departs on travel to attend the G-7 Summit in England, the first foreign trip of his presidency, from Joint Base Andrews, Maryland on June 9 2021. Picture: REUTERS/KEVIN LAMARQUE

Whether Joe Biden’s presidency will be as transformative as many are hoping remains to be seen. But if it does turn out to be one of those pivot-of-history kind of presidencies, like that of Ronald Reagan or Franklin D. Roosevelt, what will be the big economic policy idea that comes out of it? For Reagan, it was tax cuts. For Biden, it will probably be cash benefits.

America’s traditional government welfare programmes, mostly developed during Roosevelt’s New Deal and Lyndon Johnson’s Great Society, were meant to reassure a nation that was deeply sceptical of government support. Some programmes required people to search for work, or only phased in once people started earning a bit of income. Others were restricted to the old or disabled. Still others were in-kind benefits such as health care, housing vouchers and food stamps. All of the restrictions were meant to ensure a distrustful public that healthy, able-bodied people would not laze around on the government dole or spend government money on vices such as alcohol.

But these precautions left the US welfare state a highly complicated mess. The thicket of programmes is so dense that people who qualify often don’t even apply for many of them. The blizzard of work requirements and complex incentives bamboozles poor people who are already mentally overloaded from the trials and tribulations of their difficult lives. Many fall through the cracks.

In the pandemic of 2020, circumstances forced the US to try a different approach. Pandemic unemployment benefits went to a much broader cross-section of the populace than traditional unemployment insurance, and there were several rounds of cheques mailed to anyone making less than $75,000-$100,000 a year. These cash benefits were a smashing success — income and consumption actually rose despite the huge wave of unemployment, and the programmes didn’t entice people into quitting their jobs.

Now the pandemic relief programmes are ending, but the idea of cash benefits has remained as a central element of Biden’s economic plans. Most importantly, the monthly child allowance of up to $3,600 a year per child, if it becomes permanent, is projected to reduce child poverty by half.

Meanwhile, the idea of cash benefits was catching on in various regions and corners of the political spectrum, even before the Covid-10 pandemic. Basic income has been a centrepiece of Andrew Yang’s presidential and mayoral campaigns. A pilot programme in Stockton, California, found that regular cash payments actually increased full-time employment.

Cash benefits have several advantages on top of being far more convenient and simple than America’s traditional approach to welfare. Instead of telling people what to spend their money on, cash lets people decide for themselves. Though there are some exceptions, in general people know what they need better than government policymakers do. Some people might need to pay to get their car out of the pound; others might spend the money on night classes; still others might cover an emergency medical expense, or pay for child care or help out an ailing family member. The government can’t anticipate all of these needs; cash covers them all.

And the less conditional cash benefits are on income, the less they discourage people from working. The complex phase-ins and phase-outs of existing programmes often create high implicit tax rates for working. Simply mailing everyone a cheque removes these counterproductive incentives. (Of course, unless they’re truly universal, cash benefits will be phased out at higher levels of income, but this does less damage than phasing them out at low levels.) Economic research confirms that cash benefits don’t tend to reduce employment much — if at all.

Cash benefits have many of the advantages that tax cuts have. Republicans were drawn to the idea of tax cuts in the 1970s for many of the same reasons — they were simple, they put money in people’s pockets and let them decide what to spend it on.

But unlike tax cuts, which mostly benefit the rich since the rich pay a lot more taxes in the first place, cash benefits are far more balanced in terms of who gets the money. In addition to seeming fairer, that means cash benefits will have macroeconomic advantages as well. Since low-income people tend to spend a higher percentage of the money they get from the government, cash benefits will be better than tax cuts for boosting demand in the economy. And the payouts could be increased in a recession to provide rapid stimulus.

So in many ways, cash benefits are a best-of synthesis — they combine the Great Society’s compassion for the poor, the New Deal’s focus on providing security to the middle class, and the simplicity of Reagan’s tax cuts. Mailing people cheques might feel like a revolution, but really it’s just one more evolution in America’s long-running quest to find better ways for the government to provide for the general welfare. If there’s one enduring idea to come out of Bidenomics, it’s a good bet that cash benefits will be it.

• Noah Smith is a Bloomberg Opinion columnist. He was an assistant professor of finance at Stony Brook University, and he blogs at Noahpinion.