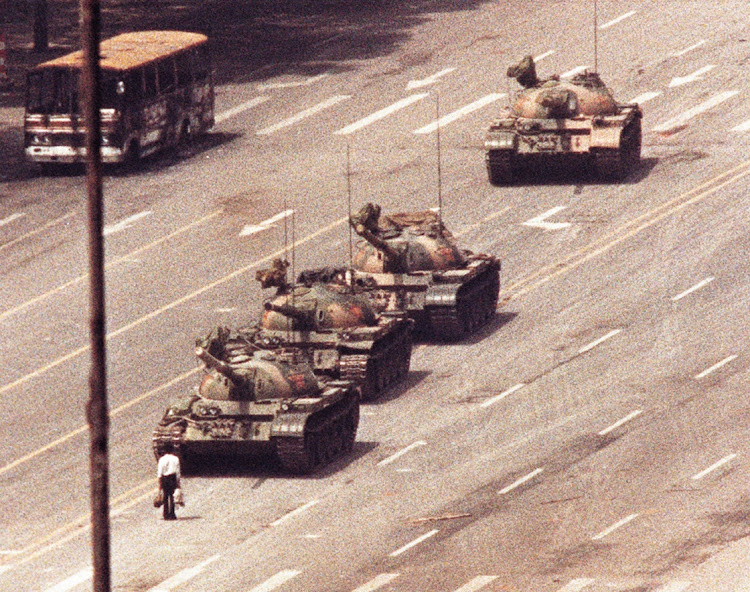 A man stands in front of a convoy of tanks in the Avenue of Eternal Peace in Tiananmen Square in Beijing in iconic picture taken on June 5 1989. Picture: REUTERS/ARTHUR TSANG /Files (CHINA - Tags: CIVIL UNREST TPX IMAGES OF THE DAY) ATTENTION EDITORS - THIS PICTURE IS PART OF PACKAGE '30 YEARS OF REUTERS PICTURES' TO FIND ALL 56 IMAGES SEARCH '30 YEARS'

When forgetting is compulsory, remembering can be a lonely business. Zhang Xianling’s 19-year-old son was shot in the head as Chinese troops bloodily suppressed the student-led protests that began in Tiananmen Square, Beijing, in 1989. In the 32 years since, she and other Tiananmen mothers have campaigned in vain for an honest reckoning of the events of June 4, while the Communist Party’s imposed amnesia has made the subject utterly taboo on the mainland.

“So there is hope after all!” she exclaimed, when the scale and passion of Hong Kong’s annual vigil was described to her a few years ago. The event, attended by up to 180,000 at its peak, was the largest in the world and kept the memory of the killings alive on Chinese soil. But there was no mass vigil on Friday, and perhaps it will never happen again. The authorities have banned it for a second year running, purportedly due to coronavirus concerns though other mass events continue, and authorities warned that anyone who tried to participate could face five years in jail. Macau acted similarly.

The Chinese Communist Party’s erasure of 1989’s killings has been so comprehensive and effective that many young people on the mainland are unaware they happened, and others have come to believe that perhaps the crackdown was necessary. The silence grows. The right to remember what happened in 1989 is also the right to know the truth more broadly: as one Hong Kong lawyer put it: “Defending the memory of Tiananmen is the first line of defence.”

What we should recall, however, is not only the slaughter 32 years ago but the huge support for the protests that preceded it. There were marches in more than 300 cities; officials including police and judges participated in demonstrations calling for freedom and reform. Many of the hundreds, possibly thousands, who died in Beijing and elsewhere were not students but ordinary residents attempting to protect them.

To remember 1989 is to remember that there is an alternative, however impossible it might seem now: that Hong Kong could have kept its freedoms; that octogenarians could be allowed to mourn their slain children without harassment; that Uyghurs could live in dignity in Xinjiang; that human rights could be protected in China and its people trusted with the truth and the freedom to debate them. /London, June 2

A recent ruling sought to define who counts as a reporter, as the nature of news rapidly evolves
Opinion
1 week ago