ANC seems on track for a strong ‘midterm’ election performance 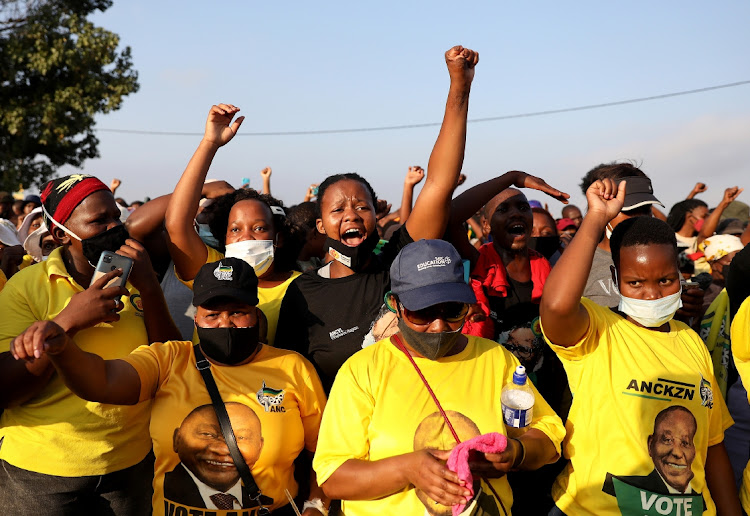 ANC supporters during a rally ahead of recent by-elections. Picture: SANDILE NDLOVU

SA’s local government elections are our equivalent of the US midterm elections.

Midterm elections typically serve as a reminder to the governing party that voters can teach them a lesson. In 2016, voters punished the ANC as the party fell to 54% from 61%. At the same time, the DA won 27% of the vote. It was a breakthrough for a party whose forebears got less than 2% of the vote in 1994.

The party emerged as the largest in Nelson Mandela Bay and Tshwane. The increased faith of South Africans in the DA saw it bring the ANC under 50% in places such as Metsimaholo (Sasolburg), Mogale City (Krugersdorp), Rustenburg and Thabazimbi.  There were euphoric scenes outside the Gqeberha City Hall and Freedom Park in Pretoria where the DA celebrated their historic first-place finish.

The crowds at these events were a far cry from the small voting pool that voted for the party in 1994. It included young black activists who were proud to associate with the party. It included Afrikaans-speaking voters who seized upon the opportunity to vote for a party that could challenge the ANC in almost all of the metros. It included coloured, Indian and Muslim voters who were not drawn to parties whose chief appeal was to their specific communities. 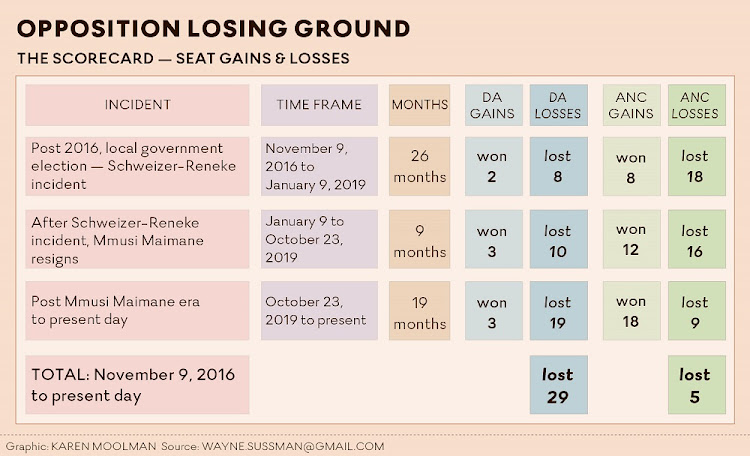 Fast forward to early 2019, and there were signs that some of the supporters who backed the party in 2016 were unhappy about the direction of the party, and unhappy about the lack of change occurring in the metros where the party was governing with its coalition partners and the outside support of the EFF. Our midterm election equivalent has the DA scrambling while the ANC seems well on track for a strong performance.

In the first period under review, between the 2016 local government elections and the Schweizer-Reneke incident, in which a school was accused of racial segregation, the majority of ward losses were seats, which were marginal. There were, however, three warning signs. DA voters in Metsimaholo were not enthusiastic about voting when the municipality had a rerun of its elections after the governing coalition collapsed. Voters did not see the “DA difference” they expected. Another alarming setback was the loss of a safe seat in eThekwini (Shallcross), where unhappiness over the previous ward councillor saw voters desert the party in an Indian community stronghold. There were also signs that voters in the sparsely populated west coast region of the Western Cape were not content, as the ANC had two impressive ward gains there.

Afrikaans supporters of the party were dumbfounded by Mmusi Maimane’s handling of the Elana Barkhuizen incident at the school in Schweizer-Reneke. Barkhuizen, a teacher at the school, had sent a photograph depicting the alleged classroom segregation to a WhatsApp group. The DA was seen to be siding with the EFF rather than learning the facts about the matter at hand. The DA was soon smashed by the Freedom Front Plus in Matlosana (Stilfontein) and in JB Marks (Miederpark Potchefstroom). It was clear that more conservative supporters of the party were not happy with the direction of the party. Towards the end of Maimane’s reign, the party fell from first to third in a Govan Mbeki (Bethel) by-election as its voters opted for the Freedom Front Plus over the DA and the ANC sneaked in to win the seat.

Indian and Muslim voters left the party for the ANC in an Endumeni (Glencoe) and Ekurhuleni (Actonville Benoni) by-election as there were more signs that all was not good in the DA house. Muslim voters in Marlboro Gardens were critical to the ANC bumping the DA off their perch in a ward that straddled a big chunk of Sandton and a section of Alexandra township. Voters were unhappy with DA mayor Herman Mashaba’s handling of land invasions and informal settlements in the area.

Also alarming for the DA was a by-election in Msunduzi (Allandale, Pietermaritzburg). This was a safe ward, and the party had the faith of the voters when they went to the ballot in 2019. Yet, a few months after the election, the predominantly Indian community of Allandale did not show up to vote. Voters from Copesville did, and the ANC produced a stunning upset. The party under Maimane was losing conservative Afrikaans-speaking voters, Indian voters and Muslim voters. It was also battling to generate enthusiasm among its voters who were not keen to put their cross next to the ANC. This was the party which mastered the turnout differential in elections and was now unable to perform this core strategy optimally.

It was clear the party needed to take action. The remedies the party employed saw the quick resignation of Mashaba, Maimane and Athol Trollip. The party failed to curb its losses to the Freedom Front Plus. It would lose two more wards to that party in the North West, in Mamusa (Schweizer-Reneke) and, more worryingly, in JB Marks. The Freedom Front Plus just had to show up in a North West by-election to beat the DA.

The south of Johannesburg took their wrath out on the DA as the party lost three wards in Johannesburg on one day. Coloured voters supported Gayton McKenzie’s Patriotic Alliance (PA) in Riverlea and Muslim voters in Lenasia lent their vote to Al-Jamah-ah. There was anger at Mashaba, there was anger at the DA not stopping land invasions when it controlled the city, and at the same time coloured voters in the south of the city found a home in the PA as it was unambiguous of who it represented. This southern Johannesburg nightmare repeated itself on Wednesday when the PA won two safe seats off the DA in Eldorado Park and the ANC was able to win a ward in Ennerdale and Finetown because of the PA and DA splitting the coloured vote, with the DA coming a distant third in the ward.

In this period, the party also lost wards in the Garden Route district of the Western Cape to the ANC and Good party as its appeal among coloured voters in rural areas of the Western Cape waned. The new leadership and new direction of the party has not triaged its by-election battle wounds.

The party does have a prototype of how to do well in by-elections and elections. There are good examples in Walter Sisulu (Aliwal North) and Matjhabeng (Welkom) since the last local government elections. The party has recruited popular candidates within the community. In Walter Sisulu, hardworking MP Annette Steyn has overseen the DA winning two wards off the ANC since 2016. In Matjhabeng, the DA won a seat back in Henneman and came close to beating the ANC in Odendaalsrus on Wednesday. In April, the Ratings Afrika Municipal Financial Sustainability Index (MFSI) announced that the five best municipalities in the country are all governed outright by the DA.

The party is also out of the 2021 local government election campaign starting blocks well before its competitors. It seems to have a giddy optimism for these elections. The recent by-election results suggest the party might be seeing something I am not.

• Sussman is an independent election analyst.

Committee is considering a hybrid system like that used for local government, says Valli Moosa
National
1 month ago
Next Article