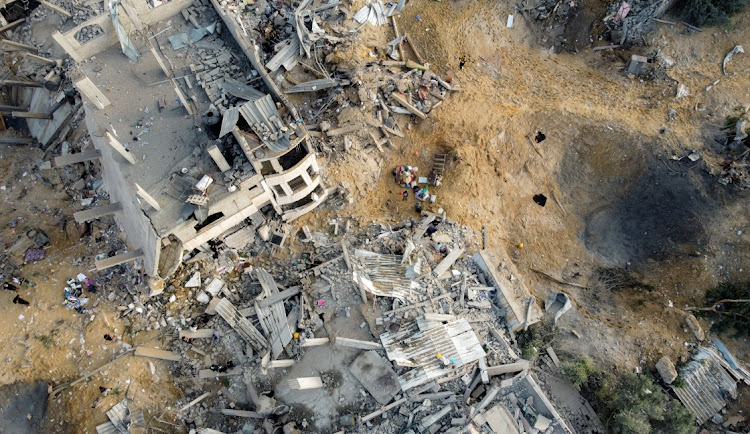 Last weekend, Israel massed troops and tanks on its border with Gaza. As the noise of their engines echoed across the strip, an Israeli military spokesperson appeared to confirm to reporters that a ground operation was under way.

But that was not the case. Israel wanted Hamas militants to believe a ground incursion was coming so fighters would be rushed to battle positions in tunnels where they could be targeted by Israeli drones and aircraft. Bloodied in several previous incursions in Gaza since the Hamas takeover in 2007, Israel would rather wage its war remotely.

As US troops prepare to withdraw from Afghanistan after 20 years, Israel’s own “forever war” in Gaza offers disconcerting clues as to what a long-running, nonground troop based campaign can look like.

At its best, Israel’s supporters say its campaign is among the most accurate in modern history, with the body count of about 200 mainly Palestinians remarkably low given the amount of firepower used.

At its worst, however, the campaign offers an alarming look into a nihilistic future, in which powerful states strike at enemies remotely, with little regard for the situation on the ground. Perhaps more worryingly still, it points to an era of unending conflict, with periodic bouts of violence with no prospect of a conclusion.

Israel withdrew its forces and settlements from Gaza in 2005, before blockading the strip two years later after Hamas seized it from its Palestinian Authority rivals. Since then, Israel has effectively besieged Gaza, strangling its economy and waging wars in 2008-2009, 2012 and 2014 against militants firing rockets into Israel.

While the present death toll is lower than in those previous Gaza wars, the ferocity of “remote warfare” from both sides has been dramatic. Hamas has  launched long-range rockets into central Israel on a scale not seen before, though most were intercepted by Israel’s “Iron Dome” defences.

While Israel’s previous large-scale military campaigns in Gaza included a ground element, such campaigns have been costly, both in lives and Israel’s reputation. This time, Israel appears to believe it can achieve what it wishes by air, though few think this will be the last such campaign.

Israel and Hamas appear resigned — or perhaps more accurately, committed — to repeated bouts of violence, with Hamas building up its ability to strike Israel and Israel periodically smashing Hamas in Gaza to degrade its capability.

It’s an approach aided by new technology — including Israel’s “loitering” suicide drones that hover over the battlefield seeking targets — and with political advantages. It’s the sort of approach the US might well choose to take on Afghanistan, particularly if the Afghan government loses further territory — or the country — to the Taliban.

So far, the US in Afghanistan, like France in its battles against Islamist extremism in West Africa, remains largely focused on working with local forces and advisers to push back groups such as Islamic State. It is far from impossible, however, to imagine them switching to a more Gaza-style approach, containing enemies in an area, then ruthlessly striking them in continuing or intermittent campaigns.

While Israeli accuracy appears to have improved — and many buildings are struck only after warnings, such as that which housed the Gaza headquarters of Associated Press and Al Jazeera — the consequences for the population of Gaza remain dire.

While hopes are rising for a ceasefire under international pressure, that will do little to improve the lot of Gaza’s population. The 14-year blockade has devastated its economy, while paradoxically entrenching Hamas in power.

For all the physical risks on either side — including to the Hamas leadership from Israeli strikes — this approach more broadly serves those at the top on both sides. Appearing strong on defence is one of the few trump cards remaining to the Netanyahu government, while Israel’s actions entrench support for Hamas in Gaza over its Palestinian Authority rivals.

International pressure to resolve the face-off more broadly has been almost entirely ineffective, and Israel appears to believe it can be increasingly insensitive to foreign opinion.

Sometime this week, the guns are likely to fall silent. But it will be only a temporary pause. Within a matter of months, or more likely years, a similar confrontation will erupt again. If that is the pattern for other world wars in years to come, that would be a tragic trend.