An apparent Islamist insurgency has terrorised the north of Mozambique and sent locals and foreign oil companies running. But being thousands of kilometres from SA, the violence won’t likely reach here. Moreover, amid a toxic combination of inept security services, corrupt governance, crime, and tribal and religious tensions, the situation in our northern neighbour looks like a quagmire best avoided.

Except that we’ll all pay a price. Mozambique has discovered gas and investors would soon have been producing huge volumes from the reserves of this natural resource, whose scale dwarfs anything the region has seen before — about 150-170 times larger than what it took for then Mossgas (now PetroSA) to produce for decades.

The scale of investment this discovery was meant to unleash could have grown Mozambique’s GDP output by six or seven times. Beyond the huge expansion of the regional economy, from which we’d all benefit, the added global supply could have helped keep a lid on global gas prices. 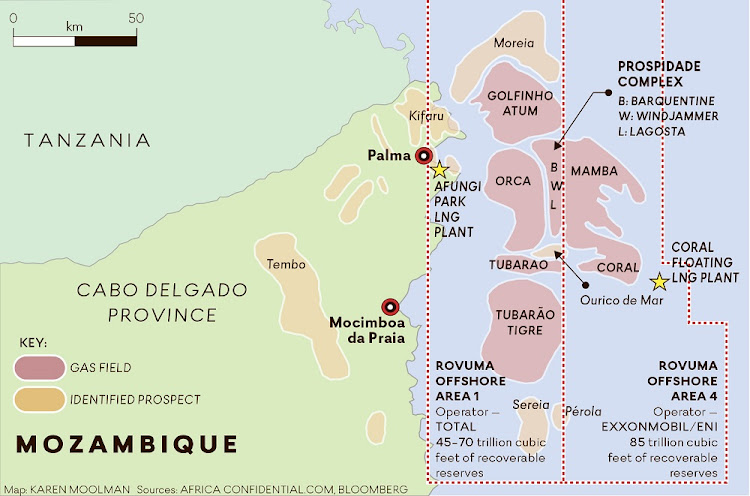 That’s because even if we in SA don’t use natural gas for power (yet?), energy prices are set on global markets. When a major supplier is cut off, it sets off a chain reaction. Moreover, natural gas will only grow in importance in the global energy market due to the vital role it will play in supporting renewables in the transition from fossil fuels. Oil majors are shifting focus to gas and renewables worldwide, and demand for gas will increase substantially.

Natural gas can smooth the transition from resources such as coal, allowing developing producer countries to accumulate the capital needed to develop their economies and living standards, and to support and transition to renewables. In addition, while their share of the total energy mix will diminish over the longer term, fossil fuels will continue to supply a significant part of the planet’s energy needs — particularly for heating and electricity — well into mid-century.

The reality is this isn’t a global “oil or gas or renewables” equation — it’s “and/ and”, not “and/or”. Natural gas will complement renewables when the wind’s not blowing or the sun’s not shining (and while there is inadequate battery capacity for storage at industrial scale). The fact is different jurisdictions have different drivers at different times and the energy future is not a one-size-fits-all equation. The differences between, say, Norway and Mozambique, could not be greater. Nor could their stages of development and motivations.

It’s not only Total and the onshore liquefied natural gas (LNG) facility in Mozambique, and the offshore floating platforms like Coral of Exxon and partners, but also the Mozambican fiscus that will benefit from gas revenues. And so will global gas markets, especially as demand is rising. Without this supply, as a recent analysis by Rystad Energy found, global gas prices will rise. Already contracted customers are having to lock in other supply, Mozambique’s budget will have to be revised to account for lower revenues, suppliers to the industry (including SA companies) will suffer, and locals will miss potential job opportunities. Like it or not, we all have an interest in what happens in Mozambique.

These gas finds are on such a scale that ultimately the commercial imperative to produce them will prevail. The US, Russia, Norway, Qatar and Saudi Arabia produce most of the world’s natural gas. The largest LNG producers are Qatar and Australia, followed by the US and Russia. LNG earns about two-thirds of Qatar’s export revenue, with Australia next in line having exported about $50bn of LNG in 2018/2019. The size of the prize is appealing, but is Mozambique really ready to enter this league? Looking on the bright side, Mozambique now has a gap to regroup and prepare. But from a global perspective, as per Rystad Energy, this missed opportunity could mean about 9-million tonnes per annum (mtpa) being taken out of global supply between 2026 and 2030, and given global demand growth, prices will inevitably increase.

If the countries mentioned above comprise the Champions League of energy production, Mozambique, with its weak security and policy environment, low value-chain business readiness, corruption and poor bureaucracy, skills and regulatory framework, looks like an inept pub team after an all-night bender. About twice Mozambique’s annual output has already been invested in the gas plays to date, which is a sort of limitless bar tab. It also suggests the investors are fully on the hook and won’t exit easily. For a poor country like Mozambique, which has low administrative capacity, to say nothing of experience managing such a complex major new investment influx, the result has been predictable: indigestion ensued and responsible fiscal and governance evaporated.

As the biggest industrial economy neighbour with the most to offer, SA will undoubtedly need to step in and lend a mutually beneficial hand. A gas partnership with SA already exists in the form of the Rompco pipeline, and we will still likely receive LNG via the southern port of Matola (not SA ports, oddly). But with jihad extremists, an inept military, corrupt officials and ruby, heroin and rhino horn traders all complicating the security situation, it will be difficult for SA, even in conjunction with the Southern African Development Community and global forces, to avoid putting the squeeze on Mozambique to accept intervention to stabilise the region.

Failing that, the projects won’t deliver full value, and that will hurt everyone. As in Maslow’s hierarchy, security is a foundation. Peace and guaranteed security will be preconditions to further investment, which could help fund the region’s development if underpinned by good policy and a strong social contract.

Mozambique and its investors may now have a gap in which to address that social contract business readiness and avoid Dutch disease. Majors such as Total and Exxon are highly mobile and have global suitors elsewhere. Given their concerns over the social licence to operate and the effect on their reputations and stock prices, they will want to see Mozambique improve its governance and opportunities for its citizens. But their non-negotiable will nonetheless be security.

Among the likely options being discussed to restore stability quickly will be creating a guaranteed secure zone, calling on foreign military assistance, hiring more mercenaries or creating a Cabinda-style enclave. If the West and its regional friends don’t step in, it’s a safe bet that other global players such as China and Russia will offer to fill the vacuum. When Mozambique President Filipe Nyusi and French President Emmanuel Macron met earlier this week at the Africa financing summit in Paris these options surely prompted robust discussion.

The attacks in Mozambique have resulted in an incendiary geopolitical mix, including issues of global energy, securing large areas such as sea routes, and ideology. However, the bottom line is that Mozambique matters. And it matters as much to Southern Africa as to the world. Without swift effective action by Mozambique and its partners, victory is by no means assured.

• Kramer, a retired SA oil and gas executive, is a global energy consultant.