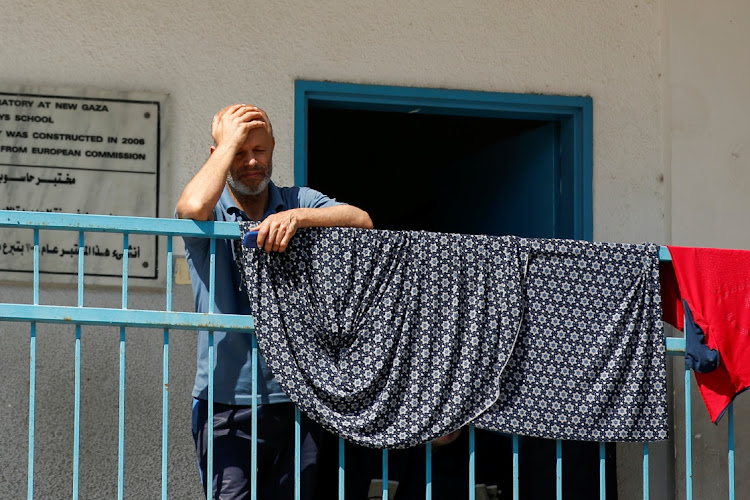 A Palestinian man, who fled his home due to Israeli air and artillery strikes, puts his hand to his head as he stands at a United Nations-run school where he takes refuge, in Gaza City on May 18 2021. Picture: REUTERS/SUHAIB SALEM

The horror unfolding in the Middle East is both old and new. There is a terrible familiarity to the destruction the Israeli state is raining down upon Gaza, and the lethal missiles fired from the strip by Palestinian militants. Three wars and numerous battles have taught everyone what to expect: indifference to civilian lives on both sides.

The unexpected and chilling development has been the outbreak of intercommunal violence, with mob attacks upon both Palestinian citizens of Israel and Jews. An Arab motorist was lynched in a Tel Aviv suburb, while in the city of Tamra a Jewish man was stabbed in the neck.

Prime Minister Benjamin Netanyahu, has described such incidents as the biggest threat to Israel, while its president, Reuven Rivlin, said that “a civil war would be a danger to our existence, more than all the dangers we have from the outside”. On one point Netanyahu is unquestionably right. “Nothing justifies the lynching of Arabs by Jews and nothing justifies the lynching of Jews by Arabs,” he said.

However, these events did not spring spontaneously from society. To win elections Netanyahu warned that Arab voters were going to the polls “in droves” and that opponents were “plotting with the Arab parties to form a government”.

The implicit message has been that Israelis can have safety without needing to concede anything to Palestinians. But this week’s events show that there can be no peace and security while Palestinians live under Israeli control with no prospect of a meaningful state of their own, and Palestinian citizens of Israel live without the same full rights and benefits as their Jewish compatriots.

Such rhetoric and tactics have alienated Israel’s Palestinian citizens and identified them as a target. If the rallies that brought Arabs and Jews together across the nation last week showed the aspiration to peaceful coexistence, the violence that prompted them pointed to the ugly reality.

The heaviest cost, as ever, is likely to be borne in Gaza. But the Israeli military and Hamas are at least used to finding their exits eventually. Resolving intercommunal violence could be far more complicated, lengthy and uncertain. /London, May 14

Israel could be fighting ground battles on its southern, northern and eastern fronts and the death toll would be very high
Opinion
4 months ago