Despite all their efforts since 2019, the combined discount to their underlying net asset value is still 42% 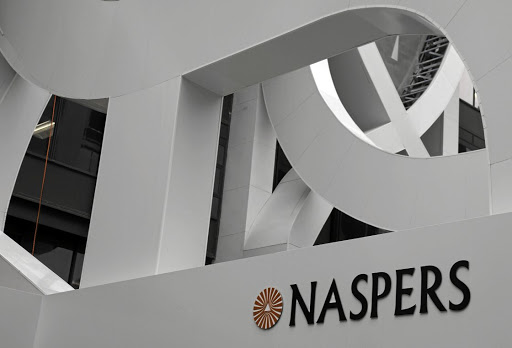 Financial markets did not react well to the Prosus announcement in April that it would sell a further 2% of its shareholding in Tencent. Investors may have recalled the previous Tencent share sale — by Naspers — three years ago, when subsequent Tencent share price gains led to the disposal being viewed as value-destructive.

Similarly, there was mixed market reaction to the recent news that Prosus intends to acquire more of Naspers in a share swap scheme later this year. What are investors to make of the latest moves by Naspers and Prosus, especially the Tencent sale? Are they likely to create or destroy value for shareholders?

There’s little doubt that the decision by Naspers to buy a stake in Chinese internet start-up Tencent back in 2001 was the event that had the single largest impact on the SA equity market over the past two decades. Naspers paid $32m for its stake in Tencent, which is now worth about $220bn, even after Tencent shares to the value of $24bn were sold by the group over the past three years. 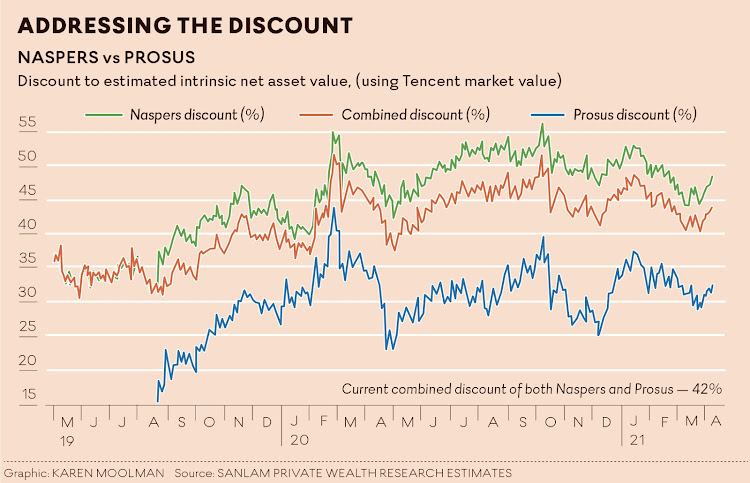 Tencent’s strong performance has clearly benefited the Naspers share price, creating enormous wealth for Naspers shareholders. However, the market value growth of Naspers has failed to keep up with that of Tencent, resulting in the stubbornly large discount Naspers has been trading at relative to the underlying market value of its investments in recent years. The likely reasons for the discount include portfolio concentration issues for SA investment managers and uncertainty around the valuation of and value creation in the remainder of the Naspers unlisted portfolio, the so-called rump.

The Naspers management team has been actively trying to address the discount by attempting to prove to the market that they are in fact adding value in the rump portfolio (which is difficult to do for unlisted investments that are high growth but often still loss-making). Events include corporate actions such as the unbundling of MultiChoice in February 2019, the listing of non-SA assets under Prosus in Amsterdam in September 2019 and a $5bn share buyback between November 2020 and April 2021.

Despite all this effort we calculate that the combined discount of Naspers and Prosus relative to their underlying net asset value is now 42%. There has been no improvement relative to the 35%-40% range back in 2018, as can be seen on the graph.

The extent to which the recently announced Naspers-Prosus share swap scheme will be successful in addressing the discount remains to be seen. Prosus is offering to acquire 45.5% of Naspers N shares via a share exchange at a ratio of 2.27 Prosus shares for every Naspers share — a ratio calculated to ensure that the expected benefits of the transaction will accrue equitably between Prosus and Naspers.

Naspers shareholders may question whether the 2.27 share ratio on offer is fair, considering that they indirectly own Prosus through Naspers at a ratio of 2.75 times, so the transaction would in effect be locking in a 17% discount relative to Prosus and is likely to trigger a capital-gains tax event.

However, the ratio is 11% above the 2.03 average Naspers has traded at relative to Prosus since the Prosus listing in 2019, while potential tax leakage that limits the clean distribution of Prosus assets to Naspers shareholders justifies a structural discount of Naspers relative to Prosus. The transaction should also increase the net asset value per share for Prosus, which will indirectly benefit Naspers shareholders.

The transaction, which will be a voluntary option for Naspers shareholders, still has to be approved by Prosus shareholders and is expected to be completed in the third quarter of this year.

While some of the mechanics of the transaction appear complex, the effective economic outcome will be a reduction in the free float number of shares of Naspers on the JSE (about 45% lower weighting) and increased free float of Prosus on the JSE and the Euronext Amsterdam. This should lead to an increase in passive fund inflows into Prosus, while a planned further $5bn share buyback over the next few months — also announced this week — should provide further support to the share. The idea is to reduce the overall discount in the Naspers and Prosus structure due to the lower relative market discount to net asset value of Prosus versus Naspers.

In April Prosus announced that it would sell down a further 2% of its shareholding in Tencent through an accelerated bookbuild. This raised $14.6bn in cash for Prosus (6% of its market capitalisation). The market reacted negatively to the announcement, possibly for two reasons:

On the second point, the 2018 Tencent sale by Naspers followed a period of strong Tencent performance in the run-up. The remainder of the year turned out to be horrible for Tencent shareholders, with the share declining as much as 40% between March and October as Chinese regulatory headwinds on video games affected financial results and investor sentiment. However, Tencent navigated these headwinds well, and the share gained sharply in 2019 and 2020, making the 2018 share sale by Naspers appear value-destructive.

Whether this has indeed been the case is difficult to ascertain. Naspers and Prosus used about half of the cash for further investment into their portfolio of online classifieds and food delivery and payments. The unlisted and early-stage nature of these investments makes it challenging to assess value creation over this relatively short period.

One investment that made it to a listing, Delivery Hero, showed very strong share gains, growing from a $1.2bn investment for Prosus to a market value now of almost $5.7bn, exceeding the growth in Tencent over this period.

By late 2020 Prosus still had about $4bn in net cash on the balance sheet following failed bids for what would have been substantial investments in Just Eat and the eBay classifieds portfolios. Management noted elevated prices for consumer internet businesses and announced that they would rather reinvest $5bn in their own portfolio through a share buyback given the substantial discounts Naspers and Prosus were trading at relative to the value of their assets.

When Naspers conducted the first Tencent share sale in March 2018 the group agreed not to sell any further Tencent shares for a period of three years. The second disposal in April 2021 therefore comes after the recent expiry of this constraint. The group has now agreed to another three-year restriction. Despite the Prosus shareholding in Tencent declining from 33% at the start of 2018 to 29% following the recent sale, it should be noted that Tencent still makes up 85% of our sum-of-the-parts valuation for Prosus, broadly similar to the contribution back in 2018. The investment case of Prosus and Naspers therefore still relies heavily on the performance of Tencent.

We live in a world of rapid change driven by the adoption of digital technology. Covid-19 has very likely accelerated some of these trends. While some companies will see their business models come under pressure under the circumstances, others will benefit and flourish. Naspers (and by implication Prosus) remains a unique asset on the JSE, where we are unfortunately otherwise limited in terms of access to proper digital economy investments. And from a global perspective, one would in our view still find it hard to find companies better positioned for the new digital economy than the likes of Tencent.

A further benefit to investing in companies like Naspers or Prosus and Tencent is that they have better access to and knowledge of many of the new opportunities emerging in the internet space, which can often only be accessed privately during the early stages.

We expected that a portion of the $14.6bn cash raised through the Tencent sale would be applied towards further share buybacks — this was confirmed by the announcement that Prosus will use $5bn for a new round of share buybacks over the coming months. For the remaining cash we expect management to continue weighing up the prospective returns of new acquisitions against scaling their current investments or further share buybacks.