Israel could be fighting ground battles on its southern, northern and eastern fronts and the death toll would be very high 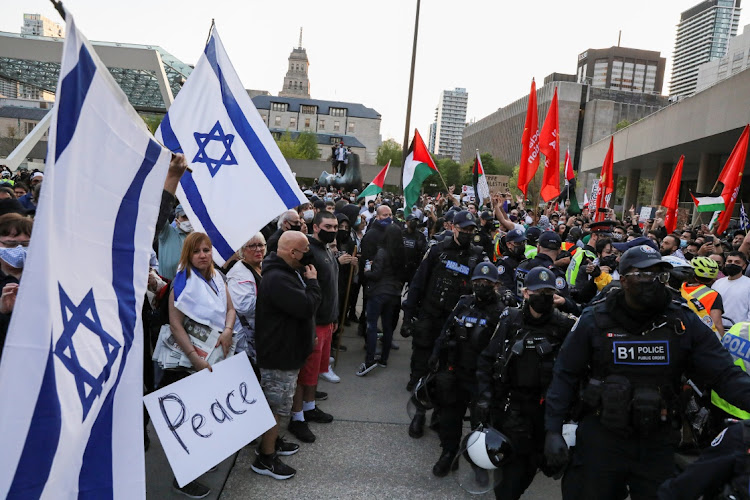 Police officers stand in line to separate protesters supporting Palestine from a small group of Israel supporters in front of city hall in Toronto, Ontario, Canada May 15 2021. Picture: REUTERS/CHRIS HELGREN

A “sum-of-all-fears” assessment is a very worst-case analysis of how a series of economic and political events could unfold. It is a useful analytical tool not just in understanding complex events but in avoiding catastrophic scenarios.

Our quick sum-of-all-fears assessment of the current conflict in Israel turns on a number of risks. A short-term risk we will watch most closely over coming days is whether new fronts open in the present conflict beyond that in the south (Gaza).

Watch the north should Hezbollah, on the say-so of Iran, start shelling Israel out of Lebanon. Hezbollah has a bigger stockpile of (more sophisticated) rockets than Hamas in Gaza, and could test both Israeli anti-missile defences and the supply of the precision-guided munitions the Israelis need to destroy launch sites without incurring mass civilian casualties. Those precision bombs come from the US, where the Biden administration’s resolve on Israel is being put to the test.

A second risk we are watching is whether, into the long term, the US will stick with its Israeli ally, especially when it comes to munitions. Making statements in favour of Israel’s right to self-defence, as the Biden White House has done, is one thing. But sustaining the flow of weapons is another when influential factions within the Democratic Party would be open to siding with the Palestinian cause, and while some members of Congress would privately be open to arming Hamas.

The long-term implications here are especially important given the influence the culture wars, and critical race theory, are having on Western society, a point to which we will return in some detail. In the absence of enough precision munitions, using ground forces to counter missile launches would expose Israeli troops to mass casualties given fears that Hamas is in possession of numbers of guided anti-tank missiles.

The third risk we flag comes from the West Bank. Mass Palestinian casualties in Gaza and/or the opening of a northern front could inspire Hamas (and other smaller extremist groups) in the West Bank to open a third front against Israel by exploiting the weak state of the Abbas administration in Ramallah and Fatah’s falling political star.

Very quickly, Israel could be fighting ground battles on their southern, northern and eastern fronts and the death toll, particularly for Palestinians, would be very high. In that event Israel may find itself also at war on a fourth front — inside Israel. This is the most important internal risk to Israel to emerge from the present conflict. Roughly a fifth of the Israeli population are Arabs, citizens of Israel. Events in the town of Lod last week — the shooting of an Arab by a Jew and other tensions and background factors saw Arab Israelis turn on their Jewish neighbours — foretell what may come should mass Arab casualties play out on the back of a ground war.

Add these risks together and you find your way to the great global geostrategic threat in all of this, which is the risk to the Abraham Accords, which saw Israel and some Sunni Arab states begin to come together in a broad front against Iran. Sitting in the middle of the spider’s web and pulling the threads is Tehran, confident that the US’s diplomacy around Iran’s nuclear ambitions will stem any serious sanction from Washington. The Iranians see this as a window of opportunity to incite a conflict that will fracture the accords around which a new balance of Israeli/Sunni vs Iranian Shia power in the Middle East had begun to crystalise.

Iran has chosen an excellent moment to do so, with Lebanon’s government and economy in turmoil, Fatah in turmoil on the West Bank, Israel’s own government in flux (and having been so for almost two years), and a new — and, in our view, naïve on Iran — administration in Washington. To that list we add one other factor that no-one else has considered: the rise of critical race theory ideology in the West.

This is the ideology that underpinned the culture wars that spurred the Black Lives Matter (BLM) and QAnon movements in the US, exploiting its racial divides to cleave them into a great chasm across which a terrible political and social contestation now rages. It is an ideology geared to do exactly that, as its theoretical point of departure is to cast societies into unbridgeable racial camps of victim and perpetrator.

Most often the theory holds that the perpetrators are white and the victims black, with whites using their influence over Western societies to become rich at the expense of keeping blacks down. Critical race theory activists teach that the only way to break out of that deadlock is to revolt against the structures of liberal democracy and collapse them. The structures and systems must be collapsed and cannot be adjusted or reformed because all the trappings of liberal democratic systems — elections, education systems, capitalism, or market economies — are just tricks to make blacks think if they play by the rules of Western society they will escape their disadvantage.

Apply that theory to Israel and you have an analytical tool to help explain the rise of the “fourth front”, given that Jews have featured prominently on the periphery of critical race theory debates as the archetype of the “white” perpetrators of racial injustice. Ellie Krasne of the Heritage Foundation put it well:

“According to the theory’s perverse logic, Jews are first and foremost members of the oppressor class, bearing guilt for any wrong done to any nonwhite group by any white people. Simply put, critical race theory repeatedly casts Jews as having outsize economic success, even relative to other white people, and this supposed success makes them the worst of the capitalist oppressors...

“Anti-Semitism has long depicted Jews as racially inferior and extremely clever puppet masters who surreptitiously control banks, politicians and the media. The clearest example of this was in Nazi Germany, where Jews were targeted both for being an inferior race and having an outsize grip on German political, economic and intellectual life. Modern-day critical race theory does much of the same... This, coupled with anti-Semitism, both targets the Jews and blame them for perceived societal ills. But the goal is not simply hatred of the Jewish people; it is to upend the civic order. Jews are just the scapegoat.”

Given the extent to which the BLM case study and its underpinning ideology swept the Western world last year, it is hard think that it did not come to resonate at some important level with the Arab citizens of Israel. To whatever extent this is so, it marks an analytical failure on the part of Israel’s security thinkers, exacerbated by how Israel played events of recent weeks around Jerusalem and the al-Aqsa Mosque.

The scenes of Arab Israelis cheering the Hamas missiles as they passed overhead while their Jewish neighbours ran for the cover of bomb shelters, or of right-wing Jews marauding around Arab Israelis, are not entirely dissimilar to the violent conflicts that played out on US streets and suburbs in 2020 — and as distressing to many moderate Israelis, we are sure, as the storming of the US Capitol was to many Americans before the defeat of Donald Trump.

From the highs of the Abraham Accords in 2020 and the promise this held for a new balance of power in the Middle East, the tables are being turned. The chatter is that Israel’s security chiefs are surprised both at the stamina and resources of Hamas and the anger of Arab Israelis, and concerned that they are being led into a conflict in which Iran will hold many of the cards.

The latter is very much the sum-of-all-fears assessment to come out of this conflict, which is that Israel gets involved in a war on three fronts that sparks an internal civil conflict among its own citizens at a time when it is without a clear government, while the battlefield carnage sees critical race theory activists make the collapse of Zionism the cause of the year, prompting Israel’s Western allies to grow distant and later hostile, ultimately putting Iran in the Middle Eastern driving seat.