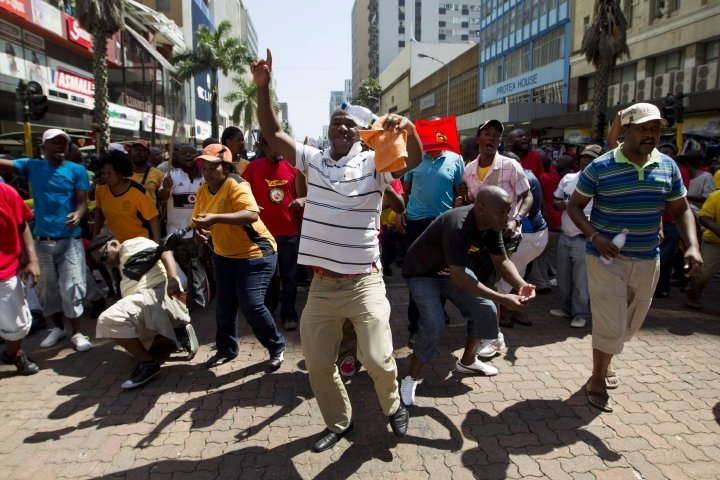 SA is on edge amid threats of a total shutdown by public sector unions in a bid to get the government to accede to their demands for wage increases.

A shutdown could halt critical services in the country, including education, transport and health care, at a time when the nation needs all hands on deck to rebuild the economy, which has been battered by Covid-19.

The government, which intends to pay no cost-of-living increase for public servants for the next three years, says reducing compensation costs is critical in terms of SA’s fiscal framework as it battles to reduce its debt load which is fast approaching 100% of GDP.

But unions are having none of it. Despite the dire state of the economy, which forced most private-sector companies to temporarily cut salaries during the peak of the pandemic, public-sector unions are pushing for a wage increase of the consumer price index (CPI) plus 4% across the board for 2021/2022. This is significantly above the current inflation rate of about 3.2%.

It’s not hard to see that with the battle lines thus drawn, a positive outcome from the talks seems remote. In SA, negotiations have historically been conducted in an adversarial context and culture that we are not likely to shed easily. But what if there was another way?

There are plenty of examples, both in business and politics, where skilful negotiation has meant that all parties walk away from the table feeling like they have gained more than they have lost. To attain such an outcome, negotiators would need to adopt three key mindsets.

Negotiation should never be a zero-sum game. Gerhard Hartman, who directs and oversees the expansion of Sage’s accounting, HR and payroll business across Africa and the Middle East, points out that nobody wants to feel like they have lost a battle. Good negotiators, he says, don’t view a negotiation as a game that can be won or lost. Rather, they try to come to a mutually beneficial agreement that leaves both sides confident in, and satisfied with, the outcome.

In the current wage negotiations, the government and labour unions are far apart, but since the matter involves public finances and affects the broader economy, perhaps as a way of moving forward both parties could sit and discuss “what is good for the country” and from there consider what will be a good outcome for both parties. This could include deferring wage increases until state finances stabilise or when the Covid-19 crisis is behind us. Both parties could prioritise the stabilisation of SA’s finances and the broader economy ahead of their respective interests.

Negotiating parties should always be aware that working against each other can destroy value.  Instead, value-maximising agreements should be prioritised and this often means finding the middle ground.

Harvard Law School professor Robert Mnookin, in his book titled Bargaining with the Devil, When to Negotiate, When to Fight, notes that both parties have to be prepared to walk a delicate line between making concessions and holding on to what is important to them. He cites Nelson Mandela as someone who exemplified this skill.

With SA teetering on the edge of an all-out race war in the early 1990s, Mandela — who had survived 27 years in prison — successfully negotiated a peaceful settlement with his former oppressors, the apartheid government, which got the buy-in of all parties. While not without its faults, this historic agreement sealed SA’s reputation as the poster child of negotiation and a case study on successful conflict resolution.

3. Always be fair and honest

A hallmark of SA’s transition to democracy and Mandela’s negotiating style was that while negotiators did not pull their punches, the dignity of all parties was always equally upheld. Many times, a negotiation falls apart because one party feels unfairly treated. It’s imperative for the process to be fair and honest so that participants can build trust.

Patently, the trust between government and public service unions has all but broken down after the former reneged on a previous multiyear wage agreement. The matter is now at the Constitutional Court as unions push to ensure the government does not pick and choose the provisions of collective agreement it implements. However, the latest round of negotiations offers both parties a perfect opportunity to start to mend relations and to promote fairness and honesty. Simple suggestions from negotiation experts include taking time upfront to discuss the ground rules, including beliefs about trust, as well as doing the necessary research to thoroughly understand the situation and context of those they will be meeting over the negotiating table. And to always treat everyone with respect.

It will take a Herculean effort to rebuild the trust, of that there is no doubt. Public service & administration minister Senzo Mchunu has described the talks with unions as the most difficult between the government and labour to date, and has even called on citizens to come forward with proposals that might assist in resolving the deadlock.

One thing is clear: even if the parties are not able to shift their core positions, it is possible to shift their orientation away from a win or lose mentality to a broader value-creating mindset. The benefits of such an approach are not just that it could potentially avoid a harmful shutdown of the economy, but that it could help establish a healthy and mutually beneficial relationship between the government and labour that will endure into the future. Now that is something worth fighting for.

Venter is convener of the UCT GSB course “Negotiation skills for managers: maximising value in negotiation”.

What can be done to increase SA’s social wage?

While it is the state’s primary responsibility to ensure social protection, the private sector can play a big role in ensuring a social wage
Opinion
7 months ago

The Treasury blames workers for economic crises, but public service employment has not kept up with the rise in population
Opinion
7 months ago
Next Article