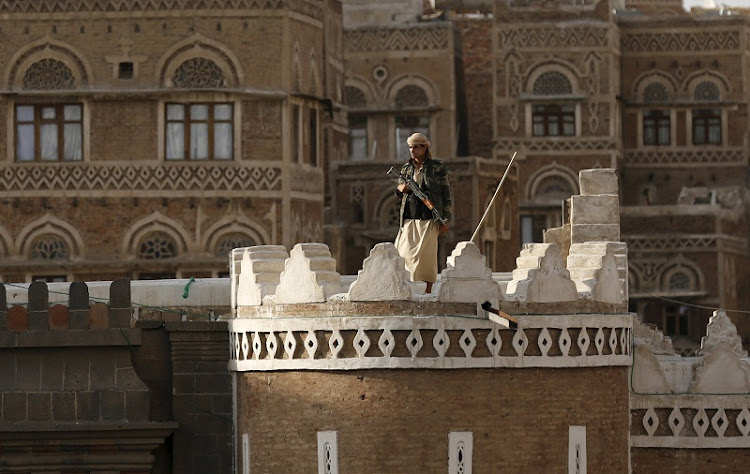 A Houthi fighter stands guard as he secures the site of a demonstration by fellow Houthis against the Saudi-led air strikes on Yemen, in Sanaa. Picture: REUTERS

London — The limits of talking softly with Yemen’s brutal Houthi rebels should now be abundantly clear to the Biden administration. The trouble is that the US has no big stick to wield instead.

Given Iran’s support for the insurgents, this bodes well for Tehran in its nuclear negotiations with the US — but ill for American allies in the Middle East.

In his first days in office, President Joe Biden suspended US military support for an Arab coalition fighting against the Tehran-backed rebels, put a temporary hold on arms sales to coalition leaders Saudi Arabia and the United Arab Emirates, and overturned Donald Trump’s designation of Houthis as a terrorist group.

The Biden team believed these moves would create the conditions for negotiating a resolution of Yemen’s six-year war. The president appointed a seasoned diplomat, Timothy Lenderking, to bring all parties in the conflict to the table. Encouraged by the signals from Washington, Martin Griffiths, the UN point man on Yemen, flew to Tehran to try to persuade the regime there to support peace.

But the US did not reckon with the Houthis’ fanatical determination to keep fighting, and Iran’s interest in keeping them foaming at the mouth. Both have grown stronger with the Biden team’s soft-pedalling.

In recent weeks we have seen abundant evidence of bad faith, from both the Houthis and Iranians. The rebels have brushed aside a peace proposal from Riyadh and stepped up missile and drone attacks on Saudi oil infrastructure. They have also ramped up their campaign to seize control of more of the country.

Their efforts are now concentrated on the city of Marib in the hydrocarbon-rich governorate east of the capital Sana’a. Once a town of just 20,000, Marib’s population has swollen to more than 800,000 as Yemenis have fled violence elsewhere. The rebels have rejected peace talks there, stoking fears that continued fighting could lead to tens of thousands of deaths.

Meanwhile, Tehran has kept up arms supplies to Yemen. One boatload was intercepted this week by the US navy, but there is no telling how many more are making landfall. Iranian officials openly boast of supplying the Houthis with drone and missile technology.

In recent days, Lenderking has been travelling in the Gulf, stressing the importance of peace in meetings with parties from those involved in the war, such as the Saudis and the internationally recognised government of Yemen, as well as those who might be able to help end it, such as the Omanis and Jordanians. But this is preaching to the choir. The belligerents who matter most have paid him no heed at all.

Lenderking has not met the Iranians, and the Houthis have rejected meetings with him and Griffiths. In lieu of any progress on the ground, the US state department has been reduced to issuing statements chiding the rebels for passing up “a major opportunity to demonstrate their commitment to peace”.

The inconvenient fact is that the Houthis, fired by historical grievances and religious hatreds, have never shown the slightest interest in making peace, neither with the Arab coalition, nor with the Yemeni government. Egged on by Iran, they have repeatedly demonstrated their commitment to war.

For Tehran, the Houthis have always been a useful tool with which to keep prodding the Saudis, Iran’s main regional rival. But the rebels are also providing the Islamic Republic with additional leverage in negotiations for an American return to the 2015 nuclear deal and the lifting of economic sanctions imposed on Iran.

Iran’s co-operation is imperative for two of Biden’s objectives in the Middle East — the resumption of nuclear diplomacy and the end of the war in Yemen — and the Iranians know it. Since there is no prospect of American military strikes against the Houthis, the US president has effectively painted himself into a corner. And he has put regional allies in jeopardy. The Saudis, in particular, have been forced into a more conciliatory posture with Iran.

This greatly diminishes the prospect of a better nuclear deal with Iran, or of peace in Yemen.

These novels provide insights from history, and stir emotions through stories that resonate
Life
6 months ago

Was Rheinmetall’s SA subsidiary guilty of sanctions-busting and responsible for selling weapons used in attacks on civilians?
Features
7 months ago
Next Article